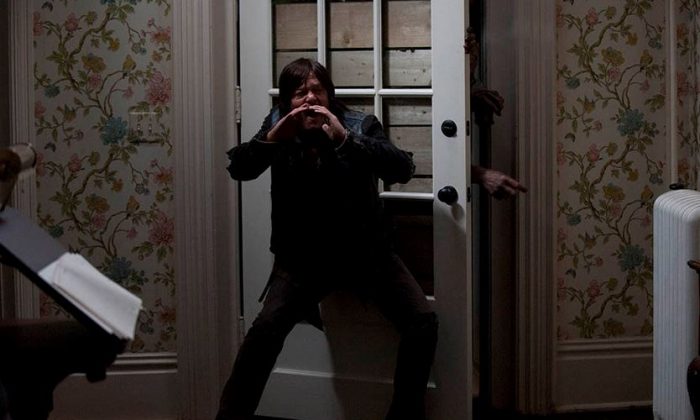 The Walking Dead Season 4, Beth and Daryl: Backstory Revealed for House They Were in Before Beth Vanished

The backstory of the house that Daryl and Beth were at before zombies came in and Beth vanished has been revealed.

The pair were left wandering after the prison was ovverrun, separated from everyone else. They hit a low point scraping around for food in the forest, eating snakes and insects, before Beth prompted Daryl to find some alcohol so she could drink for the first time.

That prompting–and the subsequent drinking–leads to them bonding deeply. They burn the dilapidated shack where they find moonshine, then find a great house that doubles as a funeral home.

The situation there was unclear. Who was living there or who had lived there? There was lots of food in the cupboards, providing Beth and Daryl with multiple good meals. Was it a trap?

Eventually, Daryl mistook his barrier of cans–which set off when something or someone try to get around them–going off as a dog which had showed up earlier, and opened up the front door. Zombies streamed in, while Daryl took a crazy turn into the basement and fended them off until he could kill them. He shouted for Beth to run outside and wait for him.

When he got outside a car with a cross was taking off, seemingly with Beth kidnapped inside. Daryl was left alone after just moments before eating a candlelight dinner and having a serious romantic time.

On the Talking Dead special on July 6, showrunner Scott Gimple revealed the backstory to the funeral home. He said that the production team formed it, even though it wasn’t shown on the show.

“There was a nice old fellow there he was an undertaker, he was taking dead bodies and making them whole before burying them,” he said.

“He died on one of these runs. In a very mundane way. He couldn’t get his nitroglycerin pills in time.”

So it turns out that if those zombies hadn’t burst in, Beth and Daryl would have been fairly secure inside. Except for whoever was in that car.