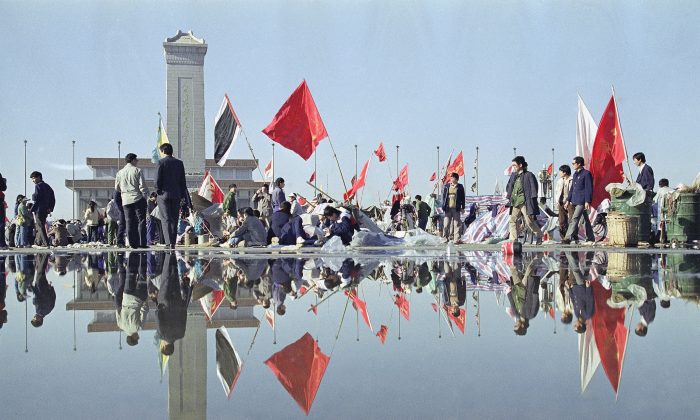 Morning activity in Beijing's Tiananmen Square is reflected in the wet pavement, May 24,1989, following a downpour the night before. In the background are the Martyrs monument and beyond that, Mao's mausoleum. (AP Photo/Mark Avery)
China

On June 4, 1989, when thousands of demonstrators were cut down by machine-gun fire or crushed beneath tank treads in the center of Beijing, their flesh bodies weren’t the only casualties.

Twenty-six years after the People’s Liberation Army, or the military arm of the Chinese regime, ruthlessly put down the popular voices at Tiananmen, what transformed wasn’t just the people’s hopes, but the way they saw their rulers.

According to a survey conducted by the New York Times, the majority of Chinese, including those residing abroad, agree with their Western peers that China is undemocratic, not free, and that human rights abuses do take place.

The disturbing thing? They no longer care. While only 5.7 percent of overseas Chinese agreed, according to another New York Times survey, that China was a democratic country (the regime terms its political system a “consultative democracy”), and while nearly half agreed that the human rights situation in China was either “poor” or “very poor,” nearly half felt that democracy would cause “social instability” and over half were satisfied or very satisfied with policy implementation.

In the days when classical Confucian philosophy guided society, ancient Chinese were taught to cultivate virtue and become junzi—a term derived from “monarch’s son”—a gentleman. The opposite of junzi was the xiaoren—literally, a small or petty person—a scoundrel who knew only personal gain and ignored virtue in his conduct.

If the very visible and highly symbolic massacre at Tiananmen revealed the Chinese Communist Party as a hypocritical regime or a “phony gentleman” (as the term “hypocrite” is literally rendered in modern Chinese) then the economic reforms of Deng Xiaoping, which scrapped Soviet-style central planning in favor of crony, state-sponsored capitalism, drove the last nails into the coffin of the Party’s Marxist utopian ideology.

While the Communist Party has remained the sole political authority in mainland China, the old theories of Marxism—and with it the Leninist power structure—have long been invalidated by the reality of market economics. Along with the rejection of the communist ideal came a moral and ethical vacuum, one encouraged in post-1989 Chinese education.

Chang Ping, a Chinese dissident journalist living in Germany, says that major changes made to Chinese schooling following Tiananmen have brought up a generation of young people who appear to “possess the faculties of independent thought,” but in fact play the role designed for them in an era where the teachings of Marx and Mao no longer afford the Party any legitimacy, New York-based New Tang Dynasty Television (NTD) reported.

Enter what Chang calls the zhenxiaoren, or “honest villain.”

According to Chang, Tiananmen forced the regime to confront the fact that its earlier pretenses to being righteous, democratic, free, prosperous, and glorious could be easily revealed as hypocritical. A change in tactics was in order—propagation of the so-called initial stage [in socialism] became the new Party line, one admitting that China was not absolutely righteous, democratic, or free.

At the same time, however, Chang notes that while people educated after Tiananmen are no longer taught to see the Party as infallible, they are frequently bombarded with the adage that “all crows under the sun are black, and every country has its own problems and nobody should pretend to stand for justice or righteousness.”

This worldview, planned out by the Communist Party’s United Front Work Department, is instilled in children starting in preschool, Chang said.

A Central United Front Work Department meeting was held on May 18, nine years since the last such meeting and the department’s first since Communist Party General Secretary Xi Jinping took power. During the meeting, Xi spoke about how the department should emphasize educational efforts targeting three demographic groups―students studying overseas, representatives from the new media, and the children of China’s wealthy elite.

Deserving of particular attention, Xi said, are overseas students, who are predicted to make up the core of the talents [needed by the Party].

“These children, who do not know right from wrong and have no concept of universal values, will become the defenders of the Communist Party, that is, free Internet propagandists for the regime,” Tang told Epoch Times.

The Way of the Honest Villain

Chen Guangcheng, a blind Chinese dissident who escaped arrest in Beijing and now resides in the United States, authored an article on Washington Post in which he describes how China is in a worse state of unfreedom now than it was in 1989.

“Fantastical tales of China’s economic might and rapid development dazzle the world. But these stories obscure a cruder reality: Connection, corruption, and fraud have funneled most of the nation’s wealth into the hands of the elite,” Chen writes.

According to Chang Ping, the Chinese state has groomed a group of people who cannot tell right from wrong and who believe in the concept that winners should be crowned and the losers are vilified.

Chen, it seems, would agree with Chang’s assessment about the honest, even proud villain he said is promoted in today’s China, especially in light of today’s blatant corruption that Chen said was not so prevalent in the 1980s.

“‘The furtive thief became a swaggering robber’ is a phrase that took root in Chinese society following the Tiananmen Square massacre. It means corruption accelerated and morals degenerated. By authorizing the violence, the message from the Communist Party to those enjoying privilege was: ‘Don’t worry—enjoy the corruption! We have the guns and the state power. Whoever opposes us will be repressed,'” Chen said.