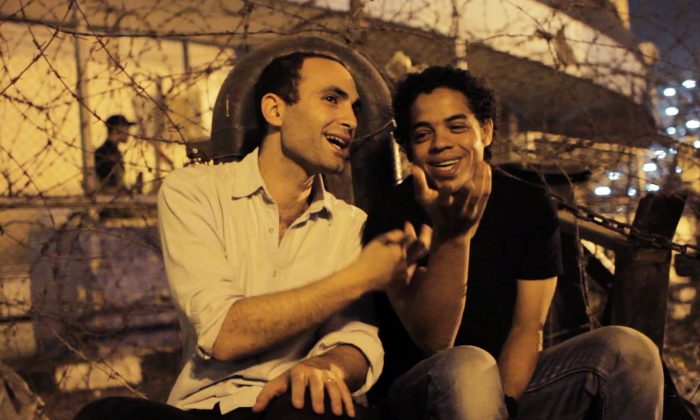 ‘The Square’: Stories of Protest in Tahrir Square

Inasmuch as the hand-held cameras are intensely “in there,” the experience for the viewer is visceral. The sense of immediacy makes one truly feel a part of the action.

Pulling back from the thrilling scenes of multitudes, mainly young people, protesting in the Square, Noujaim’s cameras follow just a few of the actual people involved in Egypt’s struggle—a struggle that seems never-ending. For the end of Mubarak’s brutal regime brought in an equally brutal regime, that of the Muslim Brotherhood, which manipulated religion to convince citizens to follow them.

Magdy, a major participant in “The Square,” is an idealistic member of the Brotherhood and a committed revolutionary. He suffers painful inner conflict, as he sees the initial noble ideals of his party undermined by the aggressive moves of the Brotherhood’s leader, Mohammed Morsi. The adage that power corrupts seems to hold sway.

The Egyptian army first follows Mubarak’s bidding, then its own; then Morsi and his party take over. But in any case, an army is an army. We see vivid scenes of citizens being beaten, tear-gassed, or shot, and killed.

Taking a prominent position in the demonstrations is the professional actor Khalid Abdalla (“The Kite Runner”), who comes from a family of activists. At one point he provides a physical space a few flights above the street where activists can film the beatings taking place below.

Because he sings protest songs to the crowd, folk singer Rami Essam is arrested by the army, and beaten. Later he shows his scars in a sort of triumph.

Other participants followed by Noujaim’s cameras include the secular young demonstrator Ahmed Hassan and the journalist Aida Kashef.

Much of the film’s power lies in the authenticity of the passions conveyed by the participating individuals. We know that these are real people; their own lives are actually on the line. Happily, excellent film editing integrates these participants’ scenes in a manner that conveys all the punch of a gripping feature film.

More importantly, “The Square” is an important filmic entity that serves to display first-hand elements of revolution, the ongoing unrest in the Middle East, and how apparent political solutions are actually fluid and are only temporary—a call for ongoing vigilance.

Diana Barth writes about film and theater for various publications, including her own “New Millennium.” For information: diabarth@juno.com