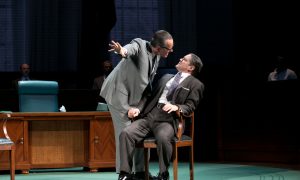 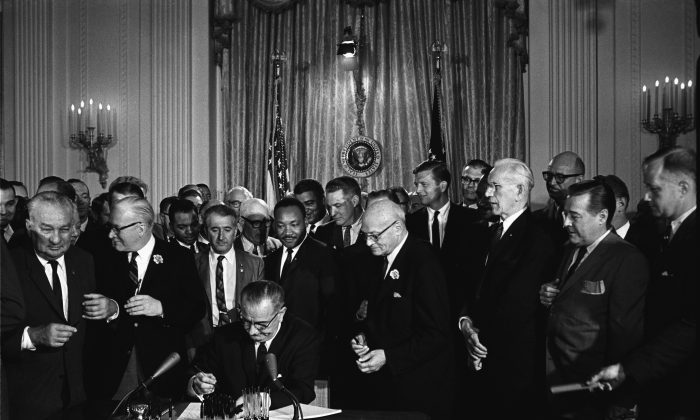 Just one of the Great Society programs: the Civil Rights Act. (Cecil Stoughton, CC BY)
News

In May 1964, Lyndon Johnson described his vision of a great society in a commencement address delivered to the University of Michigan.

The audience could not have been more receptive to his message. Speaking to a university where President John F. Kennedy had announced the Peace Corps and which had supplied some of the leaders of the activist group, Students for a Democratic Society, Johnson called out to the audience a series of questions, each one eliciting vocal waves of affirmative answers from the graduating class.

The speech, in some respects, was a cornerstone of Johnson’s 1964 election campaign. He used the speech to articulate his own program, distinct not only from Kennedy but also from his political mentor, Franklin Roosevelt, in whose shadow he stood.

LBJ wanted to put a stamp on a program of his own. He believed that the power he had in his hands was to be maximized for progressive ends. More importantly, though, liberalism was undergoing a series of shifts in direction. Johnson’s speech helped channel and accelerate the new mood.

To many liberals, prosperity had come to seem an almost permanent characteristic of American life. A broad, expanding middle-class was taken for granted by the date of Johnson’s speech.

If sixties liberals saw the New Deal as primarily an architecture to provide an economic floor for citizens when industrial capitalism faltered, they also concluded that a new program was needed to address the anxiety and discomfort that was festering in America. Liberals had concluded that government’s mission had less to do with ensuring economic fairness than with helping people to find meaning in their lives and to achieve a level of spiritual fulfillment.

Above all, Johnson wanted to deliver a speech that called Americans to a greater purpose. Without this context it’s difficult to grasp why Johnson announced a vision of such sweep.

Why Was It Called ‘the Great Society?’

LBJ began the speech with a call, simple and bold, to bring an end to the twin scourges of racism and poverty in his time. But that was just the start, he announced.

In his brilliant memoirs, Richard Goodwin – who was the primary author of Johnson’s speech – recalled how almost as an afterthought he had inserted the phrase “Great Society” into a minor speech. “In our time,” he wrote, “we have the opportunity to move not just toward the rich society or the powerful society, but toward the great society.” Johnson admired the phrase and continued to use it in his remarks. Reporters soon were describing Johnson’s entire program as “the Great Society.”

Goodwin explained that “the very engine of prosperity—growth, development, technology, the golden liberators – were themselves corroding the spiritual and material conditions of American life,” and Johnson’s speech, which put a stamp on the phrase and outlined the philosophy behind it, took aim at the developments.

Johnson declared that the government, working with a citizenry motivated to improve community life, had to make cities more livable, protect the natural environment, and provide education that gave all citizens regardless of race or class the chance to rise in society and find meaning in life.

The speech was a spiritual invocation as much as a political statement to fulfill Jefferson’s promise in the Declaration of Independence to give all the right to “pursuit of happiness.”

“The Great Society,” Johnson declared, “…demands an end to poverty and racial injustice,” but it also had to be “a place where every child can find knowledge to enrich his mind and enlarge his talent…where the city of man serves not only the needs of the body and the demands of commerce but the desire for beauty and the hunger for community.”

The Great Society, he added, meant making the nation’s cities places where “future generations can come together, not only to live, but to live the good life.” It was a place where “America the beautiful” and “our natural splendor” were protected from the pollution that threatened to destroy “the water we drink, the food we eat, the very air we breath.”

While Johnson’s 1964 speech dwelled on the problems of the cities, the environment, and education, the constellation of programs that came to be known as the Great Society addressed a much wider agenda. They included not only Medicare, Medicaid and civil rights legislation but also the creation of a department of Housing and Urban Development and the National Endowment for the Arts and the Humanities, to name just a few.

“The liberal assumption that rising wealth more widely distributed would liberate Americans for the ‘pursuit of happiness’ had proven…inadequate,” Goodwin wrote of the genesis of the speech. The address, he argued, represented “the only possible direction for liberating, progressive change”.

Unlike Today, People Had Faith in Good Government

The speech was also a response to the movements for social change led by the civil rights revolution in the South that were sweeping the country.

The liberals in the White House, Goodwin observed, were very much citizens of their time. African-American, women, consumer and nascent student movements suggested to the liberals in power that citizens and their government could relieve people from the suffocating bonds of past prejudices and free them to fulfill their potential.

Johnson’s speech reflected his faith in the power not just of government but also of ordinary citizens to enact changes that benefitted fellow Americans.

Over the past decades, Democratic politicians have worked hard to put a lot of distance between themselves and Johnson’s call for a Great Society.

Bill Clinton declared the end to the era of big government in 1996, and Barack Obama has resisted in his oratory and policies the kinds of soaring promises of a revolution in society initiated by government.

Johnson’s speech contains sentiments that no major Democrat would dare to voice in 2015 and still hope to be taken seriously. And for good reasons.

The hopes and promises articulated by Johnson were grandiose, and inevitably raised expectations (bringing an end to poverty and racism for example) that no president could realistically hope to achieve.

Johnson’s Great Society by now has also become so associated with big-government connotations that Democrats running for office at a time when government is viewed with extreme displeasure, would be committing political suicide if they embraced Johnson’s soaring rhetoric.

Nonetheless, Johnson’s speech remains a great speech and not only because it defined a program – much of which was enacted into law – that has proven beneficial to millions of Americans for the past 50 years and counting. The Great Society speech marks a key moment in American history because it called on both government and citizens to create a just, more equal and humane society – cutting the poverty rate, protecting the environment, bolstering public education, curbing racism -— in ways that still guide our political debates and capture much that is decent and sensible in the liberal political tradition.

Even as Democratic politicians run from Johnson’s legacy, they are forced, wittingly or not, to operate in the shadow of the words he uttered at Michigan more than 50 years ago.