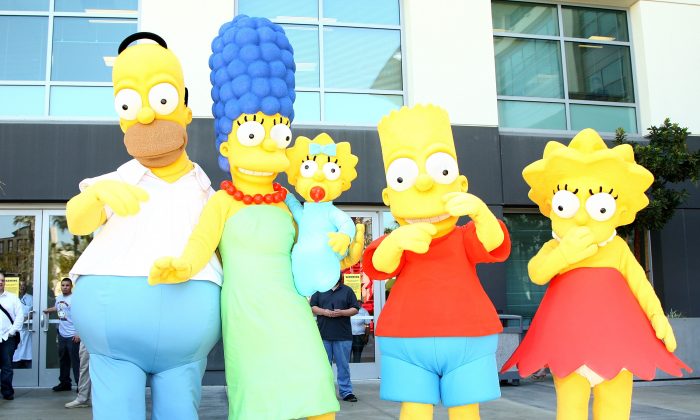 One of America’s favorite family television shows is claimed to have predicted a plot twist in a popular medieval fantasy series years before it happened.

“The Simpsons” correctly foretold how May 12’s “Game of Thrones” episode would end as early as the year 2017 according to the New York Post.

In season 29’s fantasy themed special first episode of “The Simpsons,” “The Serfsons” showed the family wearing medieval attire. Homer, Marge, Bart, and Lisa were gazing at a view of their home town from within the walls of a fortress.

“Look! The dragon is burning our village,” Bart said while pointing in the direction of a red dragon blowing flames across the sky.

Homer laughed and said, “I love our life.”

The episode ended with a poem: “Dry your tears, a journey’s end, the saga’s done. We part as friends, we must away, we cannot tarry, the minstrel’s burden is ours to carry, all other stories will ever pale, for we have sung the perfect tale.”

Commentators used social media to draw parallels between “The Serfsons” and “Game of Thrones,” which featured the fiery destruction of King’s Landing, the capital of the fictional continent Westeros as well as Red Keep in the southeast corner of King’s Landing.

“‘The Simpsons’ predict the future yet again,” WurstPunditEver wrote on Twitter on May 13.

The Simpsons predict the future yet again 😳 #GameOfThrones #Simpsons pic.twitter.com/MvSMaMMv37

The spoof is not the first time the Fox series has apparently predicted the future. Donald Trump’s presidency, the September 11, 2001 bombings, and the Walt Disney Company’s acquisition of mass media company 21st Century Fox, were all seemingly featured on “The Simpsons” before they occurred.

“The Simpsons” predicted Trump’s rise to presidency back in the year 2000, some 16 years before it actually happened in 2016.

Original show writer Al Jean, however, has claimed it was a “plausible prediction.”

“People have somewhat forgotten but he was talking about running for president then,” Jean told the Irish Times.

Not only did the Simpsons predict Trump winning, they even “predicted” the electoral map and they got it right. pic.twitter.com/AG32QqX206

The 9/11 attack on New York City’s World Trade Center was apparently predicted in a 1997 episode when Bart pays for a tour around Manhattan advertised to be $9 with an image of the twin towers next to it as if were intended to say 9/11.

“There is a frame where there’s a brochure that says New York at $9 a day, and behind the nine are the twin towers … it looks like ‘9/11,’” Jean said. “That one is a completely bizarre, strange thing.”

Did The Simpsons predict 9/11?

Executive Producer Bill Oakley revealed the price of $9 was just intended to be a ridiculously cheap fare.

“I will grant that it’s eerie, given that it’s on the only episode of any series ever that had an entire act of World Trade Center jokes,” he said.

Disney’s $52 billion acquisition of 21st Century Fox in 2017 was shown nearly two decades earlier in a 1998 episode of “The Simpsons,” with a sign shown that states “20th Century Fox, a division of Walt Disney Co.”

Wow the Simpsons predicted that 20th century fox would be owned by Disney pic.twitter.com/UkJvEH9RlR

Jean revealed the writers of the show really believed there was a future where Disney would own Fox.

“It happens, there’s always mergers. It seemed logical, you know,” he said.