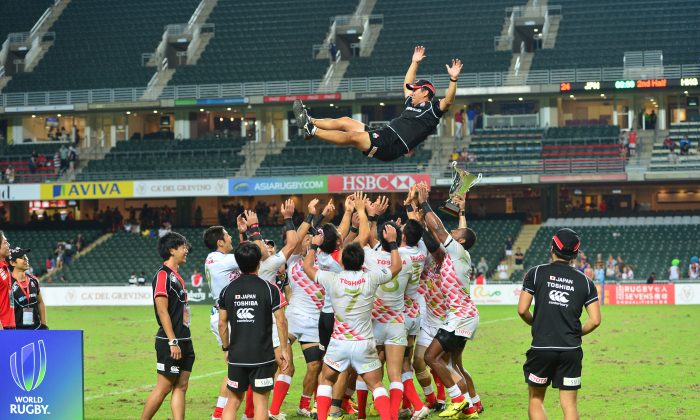 The Japan Rugby Sevens team tosses their coach Tomohiro Segawa into the air in celebration of qualifying for the 2016 Rio Olympics after winning the Asia Rugby Sevens Qualifying competition in Hong Kong on the weekend of Nov 7 – 8, 2015. (Bill Cox/Epoch Times)
HK Rugby Union

The Road to Rio: the Asian Rugby Sevens Qualifier

HONG KONG—In front of an almost empty Hong Kong stadium for much of the competition, on a pitch that still requires critical attention, Asian finest men’s and women’s Rugby Sevens teams provided a veritable feast of ‘sevens rugby’ over the weekend of Nov 7-8. It was reminiscent of the Hong Kong Sevens of old, for those wanting a trip down ‘memory lane’, when Asian teams fought for Asian bragging rights in rugby, although this time with an added competitive feminine twist.

There were two tournaments: the men’s competition, for which the winner goes to Rio next year, the teams coming 2nd, 3rd and 4th will be invited to compete in a repecharge tournament and the rest stay home. And for women, where points won accumulate towards a final total, that will be added-up after the final round in Tokyo on 28th and 29th November. Again, the winner goes to Rio and the 3-runners up go to the repechage.

Men
The greater prize and glory was with the men: Rio and the Olympics. The group stages went to form and provided the two expected semi-finals: Japan versus Sri Lanka, and Hong Kong versus South Korea.

In the first semi-final, Japan trounced Sri Lanka 43-0. The second semi-final was a closer contest, but Hong Kong came through 19-10.

The final between Japan and Hong Kong was electric. Overwhelming favourites Japan, for the first time faced a team determined to make them work for victory. Hong Kong pressured Japan, and became the first team all-tournament to score against Japan. Not once, but twice. And at half time, Hong Kong held a deserved 10-0 lead. But, this was a final of two halves. Japan, regrouped, gained possession, starved Hong Kong of ball and dominated the second-half. They ran out comfortable 24-10 winners, and took the honour of being the Asian representative at Rio. Spare a thought for Hong Kong. This was a final, where winner takes all, and Hong Kong came within 8minutes of glory.

In the other match of significance South Korea beat Sri Lanka 26-21 in the 3rd and 4th playoff.

Women
The women played in a Group of six, where the top two places determined the finalists. The group games proved much closer and the form book a less accurate guide of results. Guam and Sri Lanka appeared to make up numbers, but gave a good account of themselves, although the real contest was between Japan, Hong Kong, China and Kazakhstan. Four closely matched teams.

In the opening match Japan only just scraped by Kazakhstan, 7-5, but romped their remaining games until they faced China in their final group match. They came up against a Chinese team looking to restore pride after disappointing results against Hong Kong and Kazakhstan. China edged Japan 12-5. It was Japan’s only defeat, although they still won the group, but on points difference over Kazakhstan.

The Kazakh team, after losing their opening match to Japan, then went undefeated. The match to determine who should play Japan in the final was between Kazakhstan and Hong Kong. The bigger Kazakh team proved stronger. They moved the ball wide and opened the scoring through their impressive winger, Lyudmila Korotkikh. Once they edged infront of Hong Kong, they defended their tryline and stayed ahead, despite a spirited Hong Kong comeback, and won 22-12.

The final was between Japan and Kazakhstan. Having being intimated by the physicality of China, Japan wasn’t going to let that happen again against Kazakhstan. Japan pressured Kazakhstan from the outset, held possession of the ball, and moved quickly through phases of play, never letting the opposition settle. They controlled the first half, and by half time, had scored three tries, and led 17-0. Kazakhstan was not helped by having a player yellow carded in both halves; six against seven is never easy, especially at the end of two days of competitive rugby. Japan scored once more, and closed out the game 22-0. Deserved winners.

In the 3rd and 4th playoff, China and Hong Kong contested another close match. Again it was edged by Hong Kong, 12-7, who again proved that size doesn’t matter so long as you tackle and take your chances. The deciding try came in the second half; when, after disciplined defense Hong Kong broke from their 22m line, for Aggie Poon to literally stroll exhausted to the try-line and then convert the try. Hong Kong held on and beat China for the second time in two days.

The same women’s teams meet again in Tokyo on Nov 28th – 29th, in the final round of matches to determine who will represent Asia in Rio. Currently Japan, lead the standings, but Kazakhstan, Hong Kong and China can influence the outcome.

This was two rich days of entertaining Sevens rugby. Japan asserted themselves as the dominant force in Asian rugby. The Japanese men booked their ticket to Rio. The Japanese women moved closer to qualification. But the other nations, from Iran to Guam, Korea to Kazakhstan, showed that rugby is alive and thriving in Asia, and Asia perhaps deserves more than one place at premium global rugby tournaments, and far more than just twelve teams be allowed to showcase the sport at future Olympiads.