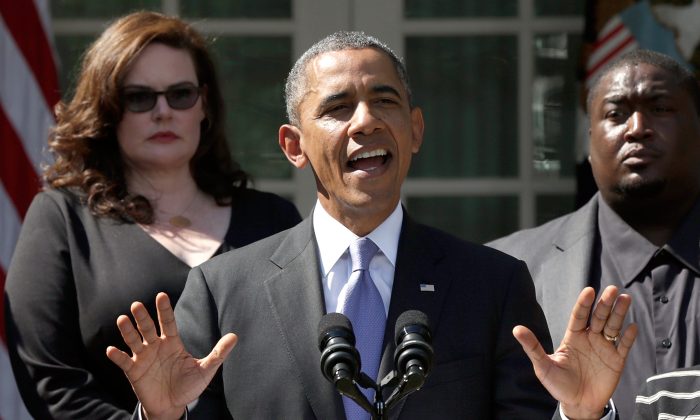 President Barack Obama delivers remarks about the first federal government shutdown in 17 years as he's joined by Americans who will benefit from the Affordable Care Act in the Rose Garden of the White House, in Washington, D.C., on Oct. 1, 2013. (Win McNamee/Getty Images)
Opinion

The Road Ahead for Congress

One of the more amazing spectacles in the days after the government shutdown ended was the obsession in Washington with who won and who lost in the showdown. Yes, the capital is focused on next year’s elections, but honestly! There was only one real loser, and that was the American people.

Why? Because nothing got resolved. The agreement leaves the government open only until mid-January, and gives the Treasury the ability to borrow through early February. All that effort secured us the barest minimum that we needed. Tax reform, spending, entitlements, jobs and economic growth: we’re no better off than we were before a small faction in Congress brought us to the brink of an unnecessary disaster. So the question is, can we avoid a similar crisis down the road?

The record of the recent past gives no ground for optimism, though members of Congress may now recognize the enormous economic costs to the nation of a shutdown and near-default. To avoid repeating their recent sorry spectacle, however, they will have to confront three challenges.

First, Congress has to break its habit of governing by crisis. Second, its members need to take a leaf from this most recent experience and remember that the essence of legislating is negotiation. Finally, they need to recognize that every time Congress fails to assert itself, other institutions gain more power at its expense.

Great democracies do not lurch from doomsday moment to doomsday moment. They plan ahead, confront and resolve their challenges, fulfill their responsibilities abroad, and respond to their own people’s needs. Congress can do none of these things so long as its members insist on resolving one crisis by setting up another a few months down the road.

Some people in Washington argue that this is because we live in trying times, faced with bewildering economic upheaval, social and demographic change, and a sorely divided body politic. That’s all true—but politics has always been about getting things done in difficult environments. Congress was designed to be the institution where the difficulties of the moment could be overcome by legislators with the skill and temperament to work together to overcome them. Instead, we face a host of challenges with a Congress unable to address them because it can only postpone a crisis from one date to another.

I find myself thinking often these days of the skillful legislators I’ve known over the years. Where are their counterparts today? The negotiations that produced the last-minute settlement may have taken a lot of effort, but they do not measure up to what’s required.

Congress only works well when its members understand some key things: that each party has to walk away with something; that it’s crucial to preserve flexibility and avoid pandering and scorched-earth rhetoric; that it needs to address the issues Americans care about most; that to avoid failure all the key players need to be at the table; and that they need the fortitude not to walk away from talks when things are going poorly.

Years ago, key players in serious negotiations went out to Andrews Air Force Base outside Washington, and were confined to the compound until they came to a resolution. We need legislators who are willing to roll up their sleeves and commit that fully to the process.

Because in our system, power never evaporates, it just flows elsewhere. So when Congress doesn’t perform, it cedes power to others.

By its inaction, Congress has given power to the president, who can use executive actions to enact policy. It has strengthened the federal bureaucracy by leaving regulatory decisions to federal agencies with very little direction or oversight. It has given massive economic power to the Federal Reserve, since someone has to promote economic growth in the face of congressional failure to deal with our fiscal issues. And it has allowed the Supreme Court to become the central policymaking body on controversial issues from campaign finance to affirmative action to environmental regulation.

“Any society that relies on nine unelected judges to resolve the most serious issues of the day is not a functioning democracy,” Justice Anthony Kennedy said in a recent speech. I’m sorry to say that he’s talking about us.