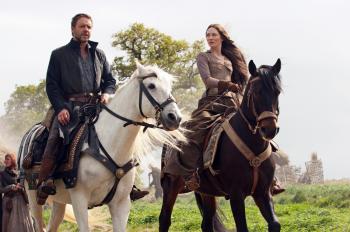 The Return of the Robin Hood

By Kristina Skorbach
Print
Robin Hood, a story of the heroic crusader returns to the theaters this Friday, May 14th, starring Russell Crowe and Cate Blanchett.

This is the fifth collaboration between director Ridley Scott and Russell Crowe, the most successful of the movies being Gladiator, which won five Oscars.

Robin Hood is rated PG-13, and will run for two hour 20 minutes. The action packed adventurous drama revolves around the traditional story of a professional archer and swordsmen (Crowe) who tries to bring justice to the corruption stricken English town.

While trying to win the hand of Lady Marion (Kate Blanchett), Robin Hood steals from the aristocrats who impose heavy taxation laws on the folk and gives it away to the citizens.

Robin Hood is said to be a true folk story, parts of which survived to make it till 1908, when the first theatrical production of the legend was retold. Some cinema fanatics say that there have been over 50 productions on the theme of Robin Hood, according to a British movie rating site, ranging from Prince of Thieves with Kevin Costner to the musical comedy Robin Hood, Men in Tights.

Some Youtube fans are saying that Robin Hood could use a younger actor playing the lead role. Others are saying that Hollywood is running out of ideas and remaking legendary movies into average rated versions. And still other have been waiting with baited breath for yet another opportunity to see the Robin Hood legend in action.

See The Epoch Times review of the movie HERE .