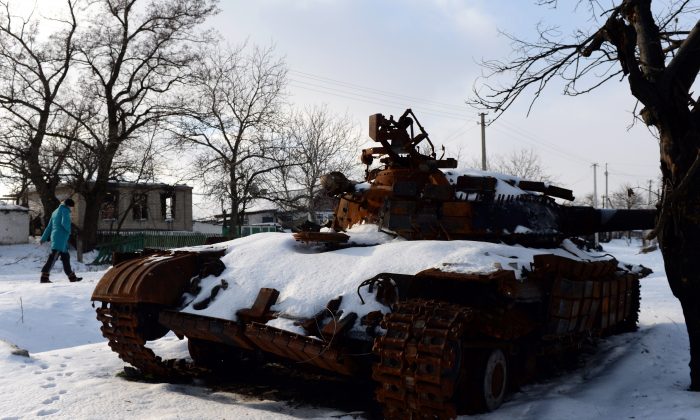 A tank destroyed during fighting between pro-Russia and Ukrainian forces in the village of Stepanivka, eastern Ukraine, on Dec. 30, 2014. (Vasily Maximov/AFP/Getty Images)
HK Current Affairs

The Real Winner of the Ukraine Crisis Could Be China

The crisis in Ukraine has plunged U.S.-Russian relations to their lowest point since the Cold War.

Crimea is now Russian territory. Although prisoners of war have been exchanged and both sides have agreed to pull back heavy weapons, the accord signed on Feb. 12 in Minsk has failed so far to stop the fighting in Eastern Ukraine. The city of Debaltseve has fallen into the hands of the separatists. On Sunday a bomb exploded at a rally in Ukraine’s second largest city Kharkiv killing two—the suspects are accused by the Ukrainian government as having been trained in Russia.

For Washington, the conflict between the West and Russia has become much more than a conflict over Ukraine’s territorial integrity. It has become a provocation to the Western liberal international order that the United States worked hard to create at the end of the Cold War; an order based on democracy, the rule of law, and free markets. Russia has not gone down this road. Instead, it is now challenging the European security order and most particularly the Eastern European states.

Talk of a new Cold War has emerged in Washington political circles. Similar views are echoed in Moscow. Konstantin Sonin, a professor at the Higher School of Economics in Moscow, said of the Kremlin’s thinking: “The country [Russia] is on a holy mission. It’s at war with the United States.”

In pushing to impose sanctions against Moscow (and possibly arm the Ukrainians), U.S. policymakers seem to have given little thought to the long-term geopolitical impact of this rift on relations with China.

If there is no viable solution to the Ukrainian conflict, we believe that the unintended “winner” of the crisis could well be China.

According the International Monetary Fund, China has now surpassed the United States as the world’s No. 1 economy as measured by purchasing power parity. Beijing is also engaged in a major military buildup. Like other emerging great powers in history—especially the United States in the late 19th century—China seeks to emerge as the dominant power in its own region.

Russia’s economy is tanking because of collapsing oil prices and Western sanctions. The World Bank now projects that Russia’s gross domestic product (GDP) will decline by 2.9 percent in 2015. And the European Bank for Reconstruction and Development estimates that Russia’s economy will shrink by close to 5 percent this year.

In a desperate attempt to stave off economic disaster, Russia is turning toward Asia to sell its natural resources, obtain loans and forge new military arrangements.

In May 2014, for example, Moscow and Beijing signed a U.S. $400 billion gas deal. In November 2014, another framework agreement for gas supply to China was signed. In September 2014, then-U.S. Defense Secretary Chuck Hagel pointed out that China and Russia are jointly developing new weapons systems. Russia’s trade with China is expected to increase to $100 billion this year from $90 billion in 2014.

The twofold logic of this rapprochement is simple: China needs resources and Russia has them. Russia needs markets, foreign investment, and money and China has them.

At the same time, China and Russia are geopolitical rivals. Indeed for Russia, its links to China are a Faustian bargain.

In the short term, Russia gains by selling oil, gas, and other natural resources to China. In the longer term, however, the consequence is to further strengthen the emergence of a China that seems fated to be Russia’s long-term competitor. Moscow is helping China to grow economically and become more powerful even as Russia itself is becoming weaker.

European leaders are rightly alarmed by the situation in Ukraine. The casualties are mounting and Ukrainian economy is on the verge of collapse. A solution to the crisis needs to be found.

There is a lot of talk, especially in Washington, about the “post-Soviet space”—the former republics of the Soviet Union (like Ukraine) that gained independence following the Soviet collapse. U.S. and European policymakers need to remember that the post-Soviet space was also the pre-Soviet space—the czarist Russian empire. Russia still sees itself as the dominant power in a region in which history and culture give it special interests. While the redrawing of Europe’s map, as Vice President Biden puts it, is unacceptable, it is a fact on the ground that will be difficult to undo.

Despite understandable condemnations of the Russian moves, negotiations with Moscow should continue.

Longer term, the United States needs to think about how to be a triangular great power. Most U.S. strategic thinkers agree that it is China, not Russia that poses the most significant 21st century geopolitical challenge to the United States. Strategy 101 would then dictate that Russia should be a counterweight to rising China.

But at the moment U.S. (and European) policy is pushing Russia into China’s arms. This, we would argue, is a geopolitical mistake. If the U.S.–Russia rift is not healed, it is China that will be the winner.