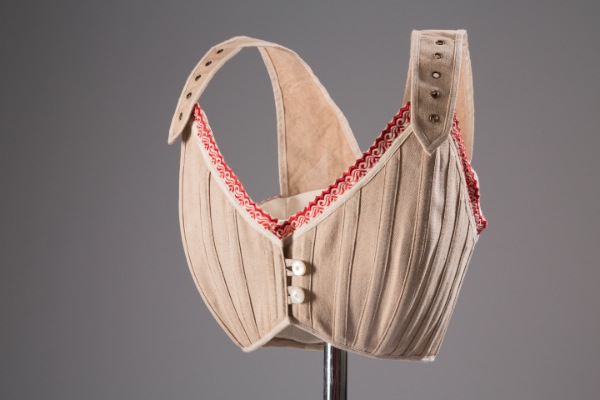 The Physics of Lingerie

Since the beginning of time, mankind has responded in a subliminal, yet powerful way to the undulating and sinuous negative space carved out by the human body in the space around it. The principle was at work even before people gave it a name and called it negative space.

Think of an oval geometric shape next to an hourglass shape—psychology tells us that both men and women are more likely to stare at the hourglass than the oval. Why? The visual path that drives the eye along the outline of the hourglass is simply more exciting, varied, curvaceous, and organic—to mention a few reasons.

It is not surprising then to consider that for centuries, women’s underwear has been dedicated to sculpting the female body into this hourglass shape with little or no regard for such details as the ability to breathe, move, and eat normally. Walking was not the simple motion we take for granted today. It meant having to look like you’re gliding around demurely while dealing with the logistics of carrying enough fabric to upholster a whole Victorian-era living room, curtains and all.

But, why not? If that was “all the rage” at the time, and if one had the means to dedicate one’s days to embroidery and playing piano, one might as well carve out a lovely silhouette while doing so.

A Visual History of How We Shaped Ourselves

It’s hard to imagine what such a constricting outfit would have really felt like, but courtesy of Exposed: A History of Lingerie exhibition currently showing at The Museum at FIT, you can get one step closer. See some fascinating objects of intimate apparel that have concealed, revealed, pushed, and pulled us women into shape from the 18th century to the present.

It took exhibition curator Colleen Hill eight months to put together over 70 of the most delicate, luxurious, and immaculately crafted objects from the museum’s permanent collection, many of which have never been shown. Each piece illustrates key developments in fashion, such as changes in silhouette, shifting ideals of propriety, and advancements in technology.

All the exhibits are fascinating, but of course the most interesting ones for our modern sensibilities are the earliest examples of corsetry and apparel that we might think twice about wearing today.

Corsets played a big part in women’s attire since the Renaissance right up to about 1915, but by 1920 even the Warner Brothers’ “health corset”—on display as you first walk into the exhibition—was all but extinct.

The health corset had no busk and was constructed out of fabric reinforced with a plant-based flexible material as opposed to whalebone or steel. The busk was the ingenious way of getting an instant straight back—it was a piece of whalebone or wood, much like a wide ruler, that would be inserted into a special sleeve inside the front part of the corset to keep one’s posture erect so that you couldn’t slouch. One such busk in the exhibition has delicate carvings on it, possibly offering a temporary distraction from its inevitable purpose.

Curator Colleen Hill was also able to shed light on another intriguing contraption that was worn under one’s skirts—the bustle. I just had to ask: “Why?”

“Part of the reason why the bustle was considered so attractive, was not about the posterior, it was about the way that when you had all of this fabric in the back, it would stretch the fabric of your skirt tightly across your legs in front. Considering that women were moving away from these kind of bell-shaped skirts where you couldn’t see any outline of their legs, it was that outline that was considered really seductive,” said Hill.

There are two bustles on display, one from the 1880s that could provide ample room for exotic birds to fly around. It was all in the name of creating that alluring silhouette and to mark the fact that there’s a human body under all that fabric and scaffolding.

Another Edwardian-era trick was to wear bright red stockings that, according to Hill, would be hidden for the most part and only glimpsed now and then.

“Particularly as we’re moving towards the early 20th century, women are leading somewhat more active lives. If you think of going up a set of stairs, and having to lift your long hem a little bit, you would get glimpses or flashes of these stockings,” said Hill, adding that the idea of wearing decorative stockings added a little bit of intrigue to an everyday outfit.

As we jump to the 1920’s and beyond, lingerie changes dramatically to comfortable, soft, and sheer fabrics, as well as constructions that are all about showcasing the body’s natural features rather than encasing them. The natural, healthy, and slim body starts to be seen as good enough to carve out its own negative space, and even if the super-slim waist has never gone out of fashion, at least now we know that it can be achieved in more clever ways.

The Dior “new look” achieved the dramatic A-line silhouette with lots of fabric in the skirt and minimal, body hugging top. The Christian Dior petticoat that is on display in the exhibition shows just how effective a wide skirt can be to create drama without hunting whales within an inch of extinction for the sake of a lithe waistline.

Nowadays the majority of women wear a bra and panties, and Hill says that it’s actually difficult to find even a basic slip. “But there is still a very strong market for very high-end lingerie.”

There are two distinct purposes now to the way we wear our underwear.

“The idea of truly functional underwear took off in the 1960s when you start to see smaller briefs and panties, and unstructured bras. Then by the 1970s you still see all of those ideas of comfort, and you also see the return of this eroticized lingerie. So by that time you had these two distinct options that we’re still seeing today,” said Hill.

The idea of lingerie for a purpose other than comfort is developed more just outside the exhibition, in the foyer, where there is a great display of FIT 2014 graduates’ work in lingerie.

It is not surprising that the students chose to express their creativity through lingerie. What is instantly striking about their work is that all five outfits are symmetrical, elegant, and totally captivating.

Of course they could have chosen to design asymmetrically too, but perhaps the reason they didn’t is that we have grown accustomed to seeing outer garment design that pushes the boundaries of balance to the point that it’s no longer a novelty. It may also be liberating to just follow the human body’s natural and symmetrical dictates.

In any case, sinuous curves, skin revealed through sheer fabrics, and the human body in all of its glory—that’s a pretty potent procreative cocktail.