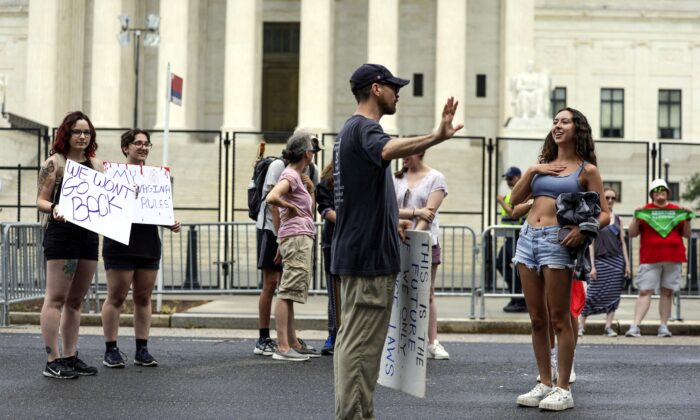 An anti-abortion demonstrator debates with an abortion rights activist as they protest outside the U.S. Supreme Court in Washington on June 27, 2022. (Kevin Dietsch/Getty Images)
Viewpoints

The Overturning of Roe v. Wade Does Not Constitute a Crisis, Despite Politicians’ Rhetoric 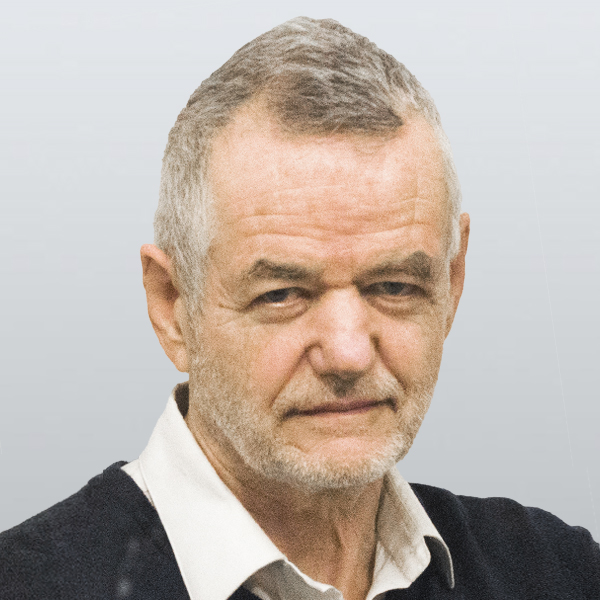 We seem to be living through an era of chicken-little politics, in which the politicians maintain their grip on the voters by manufacturing crisis after crisis. The sky is falling.

The latest crisis concerns the decision of the U.S. Supreme Court in Dobbs v. Jackson, which overturned Roe v. Wade and allowed the Mississippi legislature to regulate abortion. The decision has been greeted with predictable derision by the politicians on the left, who have openly attacked the legitimacy of the court.

It is easy to get lost in the emotions surrounding the case. In point of fact, the legal significance of Dobbs is not that it overturned Roe v. Wade. It is that it overturned another case, Planned Parenthood v. Casey, which considered the limits of the doctrine of stare decisis, or precedent. The doctrine runs into problems because judges make mistakes, like everyone else, and there has to be some mechanism to correct them.

The court in Casey was unhappy with Roe v. Wade, but felt that it would cause too much of an upheaval in the system to overturn it. That is where the judges in Dobbs disagreed. They held that the decision was so manifestly wrong that it had to be overturned.

Their problem with Roe v. Wade, at the end of the day, is that the judges in the case simply went with their own views. That is a problem because the constitution says that these kinds of difficult moral decisions should be made by the people, through their democratic institutions. There are limits, and the politicians have to respect the constitution, but the judges basically have to step aside and let the legislature decide.

The allegation that the judges in Dobbs over-stepped their limits accordingly has it backwards. Whether you agree with the court or not, the case stands for the proposition that judges have no right to impose their moral views on the rest of us.

The court’s view of abortion has also been misrepresented. The Mississippi legislation prohibited abortion in cases where the “probable gestational age” of the fetus is greater than 15 weeks.  So it needs to be stressed, with all the misinformation out there, that it allowed abortion in the first 15 weeks. It also recognized exceptions. The statute was not a radical piece of legislation and adopted the kind of balanced position that the courts tend to favour, which leaves enough room for legitimate action on both sides.

The important point is that the majority took no position on abortion and merely said that the legislature had taken a “rational” position in the circumstances, which served a legitimate legislative purpose. The rest of it must be decided by the voters.

In Canada, the key opinion was written by Bertha Wilson, the first woman on the Supreme Court and a recognized liberal, in R. v. Morgentaler, which overturned the Criminal Code provisions that regulated abortion in Canada.

Madame Justice Wilson had no difficulty with the regulation of abortion. The protection of the fetus, she wrote, “is a perfectly valid legislative objective.” It is the same position that the court took in Dobbs. The question, then, is “at what point in the pregnancy does the protection of the fetus become such a pressing and substantial concern as to outweigh the fundamental right of the woman to decide whether or not to carry the fetus to term?”

Justice Wilson took the conventional position. In the early stages of a pregnancy, a woman’s decision is “absolute.” In the later stages of pregnancy, however, the interests of the fetus have to be considered and the state can legitimately step in to protect it. She then suggested that the point at which the state can intervene “might fall somewhere in the second trimester.” That is naturally the position adopted by the Mississippi legislature, and the reality is that the court which gave women the right to choose an abortion in Canada would probably have upheld the Mississippi law.

The point is that the position taken by the court in Dobbs is moderate and qualified, and the attacks on the legitimacy of the court are highly irresponsible. The only motive for the attacks, as far as I can see, is that many politicians dislike the decision. They have responded, rather typically, with wild allegations that the decision will outlaw all abortions in the United States.

The suggestion is lamentable. No one really knows what the courts will decide and the politicians need to take a deep breath and wait, like the rest of us, and see what happens. There is nothing out of the ordinary in Dobbs and the outlines of the law will slowly emerge, piece by piece, as the judiciary works its way through the other cases in the system. That, I daresay, is how the common law is supposed to work.

Paul Groarke
Follow
Paul Vincent Groarke is a retired lawyer and academic. He has a Ph.D. in philosophy and has published extensively on the history of common law, ethics, and philosophy. He has recently commented on the COVID crisis in "The System of Rules," a book in which he discusses political theory in language that anyone can understand.