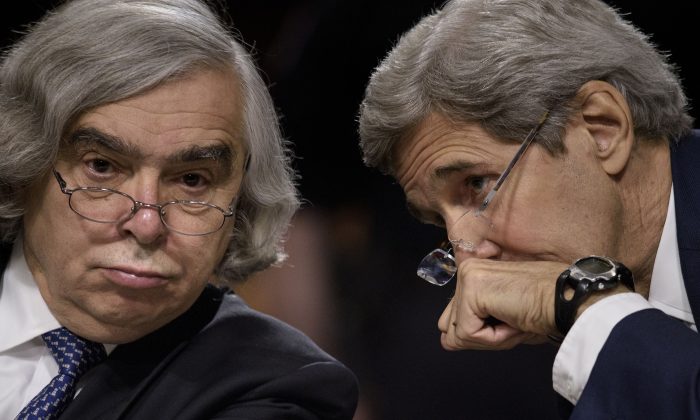 The Nuclear Test Ban Treaty Is Still a Bad Idea

Like the antagonist in a bad horror film, some ideas just won’t die. The Comprehensive Test Ban Treaty (CTBT) is one of those ideas.

The Senate refused to ratify the treaty back in 1999, the first time the Senate rejected a treaty since Woodrow Wilson’s League of Nations. Still, Secretary of State John Kerry and Secretary of Energy Ernest Moniz recently announced their intentions to get the Senate to reconsider.

The CTBT was a poor deal in 1999, and nothing has occurred in the interim to change that.

The CTBT was a poor deal in 1999, and nothing has occurred in the interim to change that.

The treaty, which purportedly bans all explosive nuclear weapons testing, fails to even define the term. The United States interprets the treaty as proscribing tests that produce a nuclear yield, but other countries could plausibly interpret the treaty as allowing low yield tests.

Such tests, when conducted underground, are unlikely to be detected; thus, a country determined to circumvent the treaty could do so without much fear of censure.

In addition to the CTBT’s problems with ambiguous definition and poor verification, the treaty is simply not applicable to today’s security environment.

The United States is the only major nuclear power not currently undertaking an extensive nuclear weapons modernization program. Such a program, is necessary to maintain the credibility of the U.S. nuclear deterrent in an increasingly proliferated and complex world. Low-yield nuclear tests would aid in developing new weapons and capabilities as well as ensuring that our current capabilities are up to snuff, as Michaela Dodge and Baker Spring argue.

The United States should not self-limit its options in the nuclear realm by acceding to the CTBT when both Russia and China are modernizing and expanding their arsenals and conducting low-yield nuclear tests.

The United States should not self-limit its options in the nuclear realm by acceding to the CTBT when both Russia and China are modernizing and expanding their arsenals and conducting low-yield nuclear tests.

The CTBT grew out of a flawed idealist theory that great powers could further the cause of nonproliferation by halting nuclear weapons testing and reducing the size of their nuclear arsenals. The evidence suggests otherwise. The United States has not conducted a yield-producing test since 1992 and has reduced its arsenal by approximately 80 percent. All the same, Iran, North Korea, and Pakistan have pursued nuclear weapons programs.

The United States currently extends nuclear security guarantees to approximately 30 allies. If these countries come to view the U.S. nuclear deterrent as no longer being credible, however, they may well feel more compelled to develop their own capabilities.

As arms control expert Kathleen Bailey testified before the Senate, “[T]he CTBT could actually promote the spread of nuclear weapons, as well as enable Russia and others to continue to modernize their arsenals while the U.S. arsenal remains static.”

The administration should drop its push for Senate ratification and leave the CTBT to finally die.

David Poortinga is a member of the Young Leaders Program at The Heritage Foundation. Copyright The Daily Signal. This article was previously published on DailySignal.com