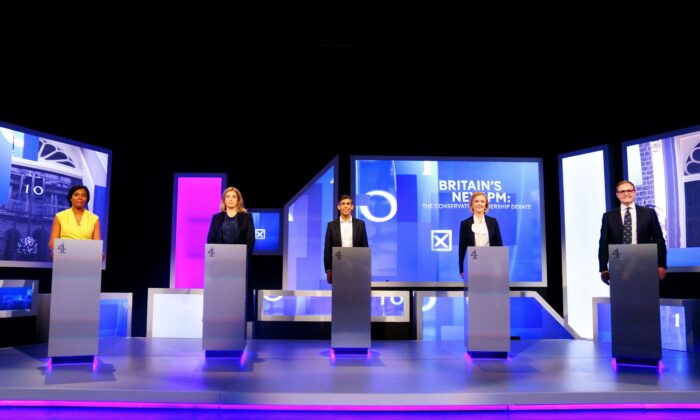 The Next Tory Leader Should Commit to Ditching Net-Zero

“We’re all Keynesians now,” Richard Nixon reportedly said in 1971 before ushering in a decade of high inflation. In the twilight of his premiership, Boris Johnson’s chief political legacy to the Conservative Party is likely to be cakeism—the political philosophy that denies the existence of trade-offs and asserts that you can have it all. And nowhere does that apply more than his embrace of net-zero, which has been embraced by virtually all the Tory leadership candidates.

Cakeism is the antithesis of Thatcherism, which was about the politics of making hard choices. Cakeism also represents the negation of strategy. In his famous 1996 paper, “What is strategy?” management guru Michael Porter wrote: “Without trade-offs, there would be no need for choice and thus no need for strategy.”

The absence of strategy and the discipline of making choices is the reason why the outgoing prime minister’s former policy adviser, Dominic Cummings, compared Johnson to an out-of-control shopping trolley. Strategy gives a government coherence and a sense of purpose. It tells voters what the government stands for and helps explain its policy choices. Without a strategy, governments appear adrift and purposeless. Cakeism is the underlying cause of Boris Johnson’s political demise.

On climate and net-zero, cakeism reigns supreme. It comes in the form of the claim that we can decarbonise the economy and have strong growth, economic growth, and rising living standards all at the same time. In an important article earlier this week, Martin Wolf, the Financial Times’s chief economics commentator, noted Britain’s “dreadful” economic performance caused by a longer-term stagnation in productivity and incomes. Yet Wolf also argued that investment in renewable energy and accelerating the decarbonisation of the economy will boost productivity. The evidence suggests otherwise. In 2021, output per hour of the energy sector was 42 percent lower than its peak in 2003. This is worse than stagnation. It represents a massive productivity contraction. It’s fair to say that when it comes to net-zero, we’re all cakeists now.

Wind and solar energy are inherently inefficient ways of generating electricity. They are low density, which means they require vast amounts of capital to produce and transmit the same amount of electricity as traditional power stations. Plus, they are intermittent, so investment and staffing of parallel generating capacity are needed to keep the lights on. Wind and solar might reduce emissions of carbon dioxide—much depends on the parallel capacity running in the background—but this is not cost-free. Growing crops to turn into biofuels is also highly inefficient, as is shipping wood pellets across the Atlantic to exploit a carbon accounting loophole that zero-rates their emissions. None of these things boosts productivity and raise living standards. All of them stunt the economy’s growth potential.

The former chancellor, Rishi Sunak, is positioning himself as the grown-up in the race to succeed Johnson. Unlike his rivals pledging immediate tax cuts, Sunak says he’ll cut them when—not if—inflation has fallen. This plausible-sounding promise defies past experience. In the mid-1990s, two of his predecessors, Norman Lamont and Ken Clarke, had to present a series of tax-raising budgets after inflation had been brought under control. The other side of the inflation hump could well reveal a vista of considerably larger deficits, as happened in the early 1990s.

Economic growth is therefore essential to maintaining fiscal sustainability and enabling a Conservative chancellor to cut tax rates and fund increased public spending. Productivity growth is the only sustainable answer to the cost-of-living crisis. By contrast, net-zero guarantees the continuation of Britain’s dismal productivity record, which, since 2008, has seen Britain as the worst performing member of the G-7 other than Italy.

Sunak says he will run the economy like Mrs. Thatcher. But pursuing net-zero is not a growth strategy; it is, to borrow from Michael Porter, a choice not to prioritise economic growth. The structural adjustments required of net-zero are colossal and will involve pain, particularly for people on low incomes and those losing their jobs in the transition.

At last year’s Glasgow, Scotland, climate conference, Sunak announced that the government will force companies to publish net-zero transition plans. According to the Treasury website, Sunak’s plan for the financial system will see the government overseeing financing flows to ensure support for the shift to net-zero, in effect, socialising people’s savings. He imposed a windfall tax on North Sea oil and gas production, which oil executives told him will undermine attempts to attract fresh investment to Britain.

Braverman, before she was ousted in the contest, argued that Britain should suspend “the all-consuming desire” to achieve net-zero to tackle the energy crisis. Badenoch has gone further, saying that net-zero overburdens the economy and that there are better ways of doing things. At least the leadership election has revealed that not all Conservatives are cakeists. If it is to restore its reputation as the party of low taxes, it is the non-cakeists who represent their party’s future.

This article was originally published on The Spectator, reposted from RealClearWire.

Rupert Darwall
Follow
Rupert Darwall is a senior fellow of the RealClear Foundation and author of the books “The Age of Global Warming: A History,” “Green Tyranny: Exposing the Totalitarian Roots of the Climate Industrial Complex,” and “Going Through the Motions: The Industrial Strategy Green Paper.” Darwall also authored the reports “The Climate Noose: Business, Net Zero, and the IPCC’s Anti-Capitalism,” “Capitalism, Socialism and ESG,” and “Climate-Risk Disclosure: A Flimsy Pretext for a Green Power Grab.”