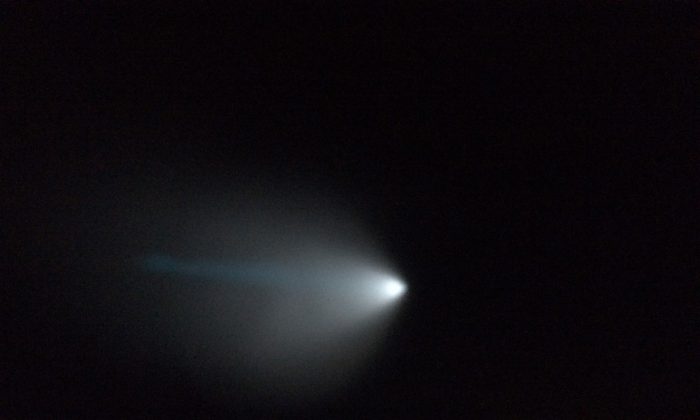 A light from a Navy unarmed missile is seen over Thousand Oaks, Calif., on Nov. 7, 2015. The Navy fired an unarmed missile from a submarine off the coast of Southern California on Saturday, creating a bright light that streaked across the state and was visible as far away as Nevada and Arizona. (Eddy Hartenstein/Los Angeles Times via AP)
US

Just days after a missile test confused numerous Southern California residents, the Navy launched another one.

In a statement, the U.S. Navy said it launched a second–and final–missile as part of a planned exercise on Nov. 9. The missile was launched from a submarine off the coast of California.

On Saturday night when the first launch was conducted, people from all over California to as far away as Nevada said they saw a bright light streaking across the sky, prompting speculation it was an alien UFO.

“It’s important that we test these missiles for our national security,” John M. Daniels, spokesman for the secretive Strategic Systems Programs office, told the Los Angeles Times. “We don’t announce future launches, but this is it for any time soon.”

Some speculated the light was part of the Taurid meteor shower, but that was quickly dismissed by Brian Keating, an astrophysicist at UC San Diego.

“The Taurid meteors would be coming from the east — and this light came from the west,” Keating told the San Diego Union-Tribune. “We’d also be more likely to see meteors about midnight, and the flash came near sunset.”

The missiles were not armed.

“The tests were part of a scheduled, ongoing system evaluation test,” the Navy said over the weekend after the first test, according to CNN. “Launches are conducted on a frequent, recurring basis to ensure the continued reliability of the system. Each test activity provides valuable information about our systems, thus contributing to assurance in our capabilities.”

That’s no #UFO off SoCal Saturday night, US #Navy sez, it’s a Trident missile from a sub in a test fire. Not 2 worry pic.twitter.com/VSnPDKkEBH

The Navy tests Trident missiles every year, launching them from both the West Coast and East Coast, near Florida.

Lockheed Martin Corp. is the manufacturer of the $31 million missile, and it constructs them in Sunnyvale, Calif. The missile is able to hit a target as far as 4,000 nautical miles away.