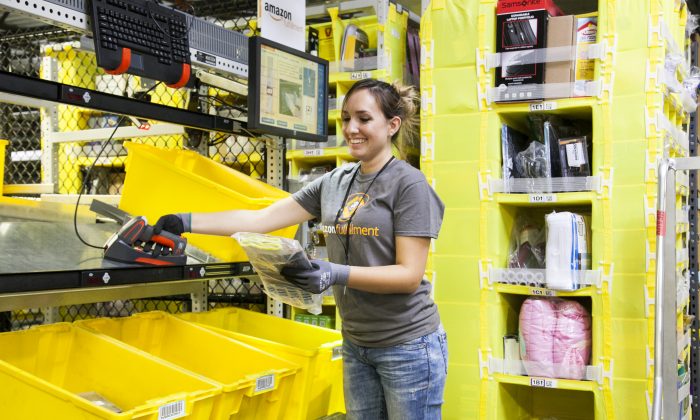 Ever wonder how online retailer Amazon can compete with everybody on price? It’s not just about economies of scale.

For many years, Amazon enjoyed a competitive advantage by avoiding the collection of sales tax in many U.S. states. The company became the world’s largest online retailer thanks partially to its sales tax strategy and to subsidies from states.

As recently as 2011, Amazon was only collecting sales tax in five states, said Carl Davis, research director at the Institute on Taxation and Economic Policy (ITEP), a nonprofit research organization focused on tax policy.

This is one of the ways by which the giant online retailer has kept its prices low compared to brick-and-mortar retailers such as Wal-Mart and Best Buy.

Online retailers can legitimately avoid collecting sales tax if they avoid building a facility in a state. Combined local and state sales tax rates range between 5 percent and 10 percent, depending on the state.

“When you allow the out-of-state companies to not collect sales tax, you’re effectively giving them a price advantage over your own local businesses. So this is a bad tax policy and economic development policy,” Davis said.

The problem is linked to a 1992 Supreme Court ruling that forbade states from forcing retailers to collect sales tax if they don’t have a “physical presence,” like a store or distribution center, in that state.

In order to take advantage of this loophole, Amazon first located its fulfillment centers in states with a small population or no sales tax.

Since 2011, however, Amazon has focused ambitiously on providing rapid delivery service to its customers. The company has expanded its physical presence, establishing fulfillment centers close to every major U.S. city. However, by the end of 2016, Amazon was collecting sales tax in only 29 states, said Davis.

“There are even more localities where Amazon is not collecting [local-level] sales tax, like Iowa, for example. The company said it would collect sales tax at the state level, but it’s not collecting Iowa’s local sales tax,” he said.

Amazon is only one part of the problem. Other e-commerce companies avoid collecting sales tax as well. “To really resolve this issue comprehensively, Congress needs to allow the states to require all online retailers to collect sales taxes,” Davis said.

In order to solve this problem, the U.S. Senate passed a bill in 2013 that would allow states to collect sales tax from retailers with no physical presence in their state. However, the proposed bill, the Marketplace Fairness Act, has yet to advance in the current U.S. Congress.

Due to the lack of federal action and mounting pressure from local businesses, in recent years some states, including New York and Colorado, have taken this matter into their own hands by enacting laws referred to as “Amazon laws” to capture uncollected taxes on internet sales.

In addition to tax avoidance, extracting economic development incentives, such as subsidies, has been a crucial part of Amazon’s expansion strategy for the last decade.

As Amazon grew, the company pushed states to allow it to build facilities without collecting sales tax, and it even convinced many states to subsidize its expansion.

One of the reasons why public officials have agreed to cut deals with Amazon is its promise to create jobs.

In South Carolina, for example, Amazon cut a deal in 2011 to receive $61 million in subsidies for its fulfillment center and secured five years in sales tax breaks, according to a report by the Institute for Local Self-Reliance (ILSR), a nonprofit research organization.

However, when the states wanted Amazon to start collecting taxes, the company threatened to shut down its facilities and lay off workers, according to the ILSR report.

With the passing of state “Amazon laws,” the company realized it had little choice but to comply. So instead of clashing with each state, Amazon decided to negotiate with states so it could receive as many tax concessions as possible.

Ivanka Trump’s Perfume Jumps to No. 1 on Amazon Despite Boycotts

Amazon received public subsidies for at least 52 percent of its facilities and data centers built in the United States between 2005 and 2014, according to a report by Good Jobs First, a nonprofit organization that tracks public subsidies. These subsidies had a combined value of $760 million.

“If sales tax matters this much at this stage of Amazon’s development … one can only imagine how much this government-granted competitive advantage propelled Amazon’s growth back when it was merely a book retailer,” states the ILSR report.