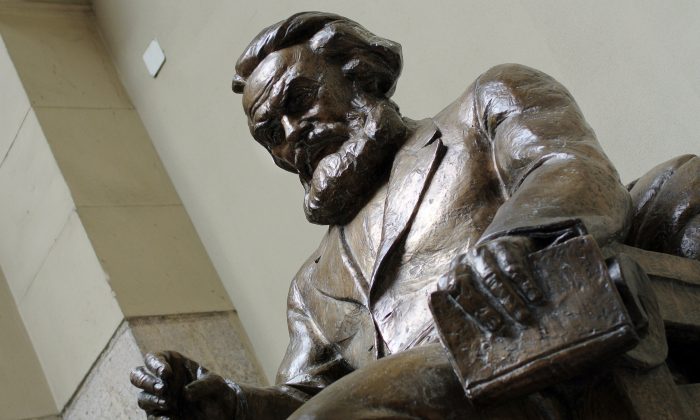 A statue of Karl Marx is seen in the building of the Corvinus University in Budapest on Sept. 4, 2014. (Attila Kisbenedek/AFP/Getty Images)
Viewpoints

The Marxist Myth of the ‘Treadmill of Production’

In recent years, Marxist theories of environmentalism have plagued online discourse and seeped their way into the public policy realm. Politicians then utilize these theories when formulating new legislation. While sometimes intimidating, these theories suffer significant flaws. Eco-Marxist theory, such as the “Treadmill of Production,” generally states two main criticisms of capitalism.

First, withdrawals from the environment. According to the eco-Marxists, production under modern capitalism requires a vast amount of material inputs. The energy/raw materials required to produce mass amounts of consumer goods leads to extreme resource depletion and waste; this is an insufficient criticism.

This is, at its core, an issue of scarcity. To the capitalist, it’s no surprise that using a resource diminishes its quantity supplied, but recognition of scarcity is a new concept for the Marxists. Scarcity is an obvious issue, but less obvious is how scarcity would be managed in a Marxist utopia absent of prices. The answer for a market economy is simple, the price system.

Rothbard beautifully explains how prices manage scarcity: “The first thing to be said about this is that on the free market, regardless of the stringency of supply, there is never any ‘shortage,’ that is, there is never a condition where a purchaser cannot find supplies available at the market price. On the free market, there is always enough supply available to satisfy demand. The clearing mechanism is fluctuations in price. If, for example, there is an orange blight, and the supply of oranges declines, there is then an increasing scarcity of oranges, and the scarcity is ‘rationed’ voluntarily to the purchasers by the uncoerced rise in price, a rise sufficient to equalize supply and demand.”

Resource depletion in a market economy has an easy fix and is ultimately a non-issue. The rising price of a good discourages the use of said good and prevents the good from running out. Rising prices for a good also creates a profit opportunity for entrepreneurs to find alternatives for that good. In contrast, a socialist economy has no bidding for privately owned resources, no prices, and as a result there is no clearing mechanism or scarcity indicator. (See “Economic Calculation in the Socialist Commonwealth.”)

If pollution is a problem of garbage disposal and not a problem of production itself, then what is to blame? The legal system. The current legal system has failed to protect property rights; instead, the law protects polluters and trespassers. Governments that once allowed individuals to take polluters to court in nuisance suits now auction off permission to pollute. Courts of law historically protected landowners from factory pollutants and other forms of trespass. This legal precedent changed in the 1830s and 40s when legal systems ceased protecting property rights and allowed pollution for the “greater good.” (Read More: “Law, Property Rights, and Air Pollution” by Murray N. Rothbard.)

Polluters can now dump fertilizer and chemicals into rivers with permission from the EPA. Pollutants can be pumped into the air as long as polluters line the pockets of the EPA’s Clean Air Markets Division and receive a pollution permit. If the federal government’s many regulatory agencies have failed and succumbed to special interests, what makes left-leaning environmentalists and progressive public policymakers think that new environmental protection agencies will fare any differently?

Much of the discussion from eco-Marxists and Facebook pseudo-intellectuals is counterproductive. They mistakenly blame free markets for a problem created by the government’s failure to ensure property rights. These free market critics often attack the market mechanisms that serve as the cures to our environmental woes. A proper solution to the current ecological situation is not possible without the inclusion of an unhampered price system and a legal system that upholds and protects property rights.