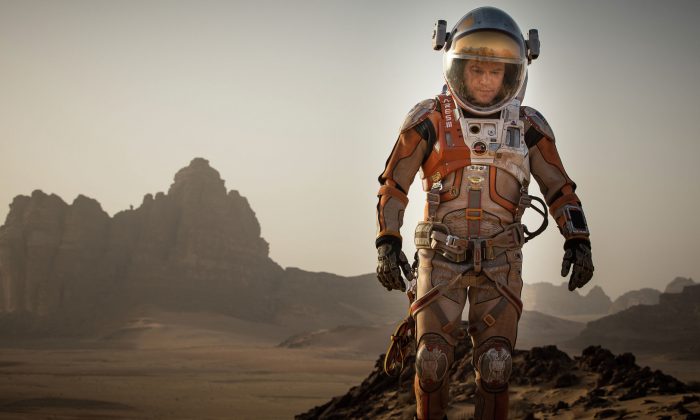 ‘The Martian’: A MacGyver-in-Space Ode to Those Who Can Geek

TORONTO—”The Martian” is a man-versus-Mars adventure that pays tribute to those who can geek, with Matt Damon playing Mark Watney, an astronaut-botanist forced to become a kind of space MacGyver after he is stranded on the Red Planet.

Watney is left behind after a storm forces his crew to evacuate Mars, believing him dead. He survives the storm, but he has no way to communicate with his crew or Earth and only a few months’ worth of food to last him the four years that will elapse before the next ship arrives.

Whereas “Gravity,” the Toronto International Film Festival’s blockbuster space movie last year, was a 90-minute scramble for survival—an almost overdose of plot without much else— “The Martian” gives us time to breathe in a landscape where Damon’s character makes the impossible workable by solving one science problem after another.

The adventure works, all the more so with plenty of humor. It would be too easy for a story about being stranded on Mars to veer toward the grim—left alone in a hostile world, abandoned. But that isn’t the case thanks to the dedication of “The Martian” to its source material, a book by the same name that even provided the film’s unusual disco soundtrack.

Like the book, the film is well-steeped in real science, giving it a realism that respects intelligent viewers.

Self-published by Andy Weir in 2011, “The Martian” earned rave reviews and was later picked up by Crown Publishing, a subsidiary of Random House, with the film rights picked up by Twentieth Century Fox in 2013.

When Weir finally got to see a cut of the film he could barely hold back the tears, he told a press conference hours before the movie’s premiere at TIFF on Sept. 11.

“For the first five minutes of the movie I was choked up, just trying not to cry because this is the kind of thing you fantasize about as a writer, something like this happening, but you don’t really believe it will ever actually happen. It’s like when you’re a kid in little league and you’re like, ‘I’m going to be in the World Series,” he said.

For the film’s acclaimed director, Ridley Scott (“Alien,” “Blade Runner,” “Gladiator”), the screenplay was all the reason he needed to do the film—welcome words to screenwriter Drew Goddard, who said Scott was his favorite director.

Goddard, recounted Damon, described “The Martian” as a love letter to science.

“The Martian” plays at times like a Western, and Scott told reporters of his love for that genre, how he had dreamed of being a cowboy until he was 18, raising concerns from his parents.

“I was brought up on Westerns,” he said.

Scott said he has taken basic themes of Westerns—man against nature or man against the odds—with him in every film he has done.

But Damon is not a lone pioneer for the entire film. After connecting his character once again with his friends at NASA back on Earth, “The Martian” reveals the interdependency that humans require but movies rarely acknowledge. Like the book, the film is well-steeped in real science, giving it a realism that respects intelligent viewers.

Damon lands Watney’s often dry humor with aplomb and holds the screen well, given that much of the film is him talking to himself, or recording video journals.

But there are plenty of scenes with the rest of the capable cast, including the NASA crew that includes Kristen Wiig, Sean Bean, Donald Glover, Jeff Daniels, Chiwetel Ejiofor, and Damon’s crewmates Jessica Chastain, Kate Mara, and Michael Peña.

Sebastian Stan of “Captain America” fame plays a crew member and said he was excited by the realism of the film and the vision it offered.

“This is a very real film, in my opinion. I mean Mars, and going to Mars is definitely going to happen, I think, in our lifetime,” he said, adding that he was a big fan of NASA and the idea of going to Mars.

“I just love being part of a movie that took place on Earth and then Mars but was also very real and grounded.”

Damon said he felt good about being part of a film like “The Martian.” It’s a movie that expects the best from people, a belief that might be lacking in the world but is sorely needed, he said.

“It’s a really optimistic and hopeful movie, and sometimes that’s our job to put something like that out in the middle of really tough times.”