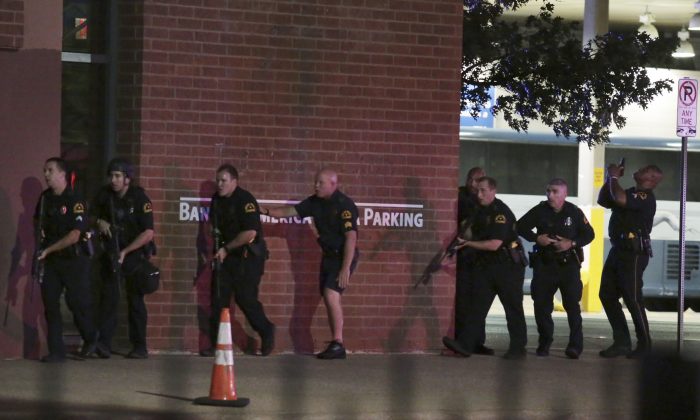 Police rigged a bomb-disposal robot to kill an armed suspect in the Dallas police shooting , in what appears to be the first time U.S. police have used a robot for lethal purposes. As such, it may represent the latest escalation in the use of remote and semi-autonomous devices by law enforcement.

Police have been using such robots for decades for bomb disposal and in hostage standoffs and fires. Meanwhile, militaries around the world have come to rely on their robotic friends to disable improvised explosive devices — a need that only increased with the U.S. occupation of Iraq in the past decade.

While there doesn’t appear to be any hard data on the subject, security experts and law enforcement officials said they couldn’t think of another incident where police have done this.

HOW IT (PROBABLY) WORKED

Such robots — which range in size from something as small as a dog bone to as large as a truck — are often just a mechanical arm mounted onto a vehicle and equipped with a video camera and two-way audio communications, according to William Flanagan, a retired deputy police chief from New York’s Nassau County who now does law enforcement and technology consulting. Many models used by police are about the size of a backpack.

Flanagan speculated that police in Dallas probably equipped their robot with a low-powered explosive—possibly one similar to what bomb squads use to blow up suspicious packages—that would only disable what’s closest to it.

Dallas police didn’t respond to a request for further information about their use of the robot.

Robotics expert Peter W. Singer, of the New America Foundation, said the killing marked the first instance of which he’s aware of in which police have used a robot to lethal effect. But when he was researching his 2009 book “Wired for War,” a U.S. soldier told him troops in Iraq sometimes used surveillance robots against insurgents, he added in an email Friday.

Regardless of the exact situation, the motivation for using the robots remains the same—keeping police and military personnel out of harm’s way.

“The reality is, police in the U.S. are not combat troops, regardless of what people say about the need to demilitarize them,” said Flanagan, who worked in hostage negotiation for about 10 years.

“It’s sad, but in the military there are acceptable casualties,” he added. “That’s not the mindset of police in the U.S.”