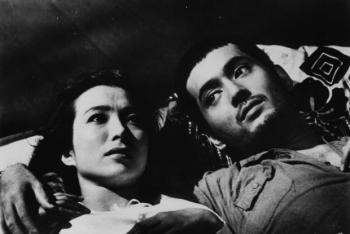 Perhaps every war film portrays characters in difficult situations, forced to make tough choices, with potentially devastating repercussions. Rarely are those choices so stark as they are here, and rarely are the implications so far-reaching. A film as imposing as its title, “The Human Condition" (Ningen no Joken), explores the moral and ethical dilemmas of life within authoritarian systems, while presenting a host of unanswered questions about the nature and possibilities of human interaction. A personal dream project of director Masaki Kobayashi, this grandiose endeavor spans World War II in an epic adaptation of Jumpei Gomikawa's best-selling postwar novel. The story is told in three feature-length chapters, released over the course of three years (1959-61) – with the complete 10-hour trilogy having entered the Guinness Book of World Records as one of the longest films ever to be shown.

Although this is a war film, a battle scene does not take place until three-fourths into the trilogy – unless one counts the moral battles constantly being played out among the main characters. Part One ("No Greater Love") begins the film’s tendency of gazing deeply at the ethics of war and occupation. Our hero is Kaji-san, played by legendary actor Tatsuya Nakadai (Kagemusha, Ran), whose performance here is suitably iconic. A humanist and idealist, Kaji is presented with a chance to escape the horrors of war by taking up a position of responsibility as the labor supervisor of a remote Manchurian mining camp. There he attempts to put his ideals into practice, and to treat the camp’s six hundred newly-arrived prisoners of war with whatever modicum of dignity can be made available to them. But at the price of protecting Chinese laborers from their abusive supervisors, he comes under the suspicion of the Gestapo-equivalent Kempeitai, and in Part Two ("The Road to Eternity"), he is dragged into an army tenure of ever-more shocking brutality. From an environment where abuse and dehumanization are merely trusty methods for population control, to the military where they constitute the main agenda and modus operandi, Kaji's self-described quest to "ride the humanism train" becomes increasingly difficult when he can no longer see what road lies ahead.

Though his surroundings grow harsher and harsher, Kaji remains essentially a pacifist throughout the majority of the film, whether confronted by his own people, the Chinese, or the Russians. He bears an incredible capacity for suffering, but this is mixed with a deep, bitter sense of outrage at witnessing or being subjected to what he considers inhuman brutality. That this bitterness contains within it the seeds of vengeance, and thus the very opposite of his higher aspirations, is central to the film’s complex moral message: In one sense, the film tells the depressing tale of an individual who must increasingly sacrifice some of his ideals for the sake of others, or for his own survival, and who ultimately is so stripped of dignity and personal agency that his only recourse against injustice is the surprising and disturbing act of retaliation that marks both the story’s climax and a point of no return for Kaji.

The majority of this Miltonian descent takes place throughout Part Three ("A Soldier's Prayer"), a chapter strong enough to stand on its own. After a devastating loss in battle, Kaji leads a group of surviving Japanese soldiers and later, civilian refugees in the attempt to return to their pre-war homes. An eventual surrender to Soviet forces causes Kaji to become subject to the same kind of slave labor he had once facilitated in the Manchurian mines. Thus his longstanding hope that socialism might be the one chance for a more humane society is brought low when he comes to realize that the Russians are in essence no less brutal than the Japanese had been. Though they decry him and his people as “fascist samurai,” the Soviets behave in much the same fashion.

When a despised old acquaintance is elevated to a position of ‘Revolutionary’ authority in the labor camp, Kaji can stand no more and makes his escape into the wilderness, there to encounter the last and worst of his privations. Starved and alone in wintry Manchuria, he is left with nothing more than regret and the memories of his distant wife. Our hero, who has evolved from official to soldier to fugitive, standing firm in his convictions in environments full of base, hostile people, is now in the depths of shame and madness, in a frozen and final isolation.

“I spent four years making Ningen no Joken. While making it, I received many letters from people requesting me not to let Kaji die in the end,” Kobayashi has explained in an interview with Joan Mellon, in her Voices from the Japanese Cinema. “I had considered that possibility, but to me his death was actually a resurrection. He had to die there. With his death he lives in the minds of people for a long time as a symbol of the hope that we can eradicate the human tragedy of war.”

In the tradition of epic poetry, “The Human Condition” centers on the fate of its hero, and through his character the viewer develops a comprehensive understanding of the world as the film depicts it. Nakadai, for his part, is possibly perfect in his portrayal of the epic hero caught up in barbarous and all-too-realistic circumstances. Though his initial enthusiastic humanism at the film’s beginning is slightly wooden (perhaps intentionally so?), the greatness of his performance is expressed in the pathos of disappointment after disappointment, horror after horror, as the world puts up a cruel mirror to this ‘unrealistic’ idealism. Normally in full self-control, Nakadai’s Kaji-san graces the screen with a handful of desperate, furious emotional outbursts that have taken their places among the greatest moments of film history. Nakadai’s fellow performers are, almost to a man, as immaculate in their acting as he. Performances from fellow Kurosawa favorites Minoru Chiaki and Ch!  ishu Ryu, as Japanese soldier and Chinese POW, respectively, are subtle and outstanding. In particular, Kaji's wife Michiko (Michiyo Aramata) shares some restrained but deeply moving scenes with him, striking rare notes of tenderness and femininity at key moments in the film’s expansive story – like painful reminders of a former peace in the midst of endless war.

"The Human Condition" is beautifully photographed in black and white and 'scope by Miyajima Yoshio. Kobayashi's wide compositions and rich contrasts present bright, stunning vistas in succession with dark, claustrophobic military base interiors – giving the long and intricate film an appropriately Baroque visual complexity. Just as in the film’s moral message, black and white are starkly contrasted yet always found together, with human beings forever at a crossroads between them.

"The Human Condition" finished off the Film Forum's Tatsuya Nakadai 24-film retrospective, which ran in New York City from June 20 through July 17; it is currently available on DVD through Image Entertainment, and there are rumors of a release from Criterion. The Film Forum will continue its summer highlights with five weeks of French Crime Wave series August 8 through September 11; the David Lean Retrospective September 12-25; and will begin autumn with the Alberto Sordi Retrospective October 3-9.