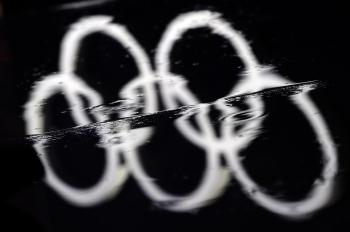 The Olympic rings are reflected in a rain puddle at the Vancouver 2010 Winter Olympics. (Fabrice Coffrini/AFP/Getty Images)
News

The Hopes and Screams of a Nation

By Matthew Little
FONT BFONT SText size
Print
VANCOUVER—The amazing thing about the Olympics is how little of it has to do with sports. Competitors face off in disciplines few follow, and less really understand–the hopes and screams of a nation rising as their man or woman earns a place for all of them in the eyes of the world.

So it is this day at Pacific Coliseum, where a capacity crowd booms like ecstatic thunder each time a fellow Canadian pulls ahead in the slides and slips of men's Olympic short track speed skating. Polite perhaps, but on this day Canadians were content to set aside their humble ways and burst into showers of excited howls as the first heat of the men's 1500 m short track was claimed decisively by Canadian Jean Oliver.

This is what the Olympics gives us, a channel for national pride, a safe and festive way to battle for supremacy in a world where abstract forces like gross domestic product and geopolitical importance can determine the place of a nation.

Here it is as simple as strength of will and force of leg.

In the races that followed, the ignored elite of this game, razor blades strapped to their feet, pushed down a sheet of ice to advance to the next round. This was survival of the fleet-est, the intensity of the battle belied by the precise grace of the combatants.

These first heats weren't about medals, they were about survival. The top three move on, the rest became a footnote in the news.

But there can be a glory in defeat as well. A quiet battle to reclaim shattered hopes, to find another star to follow as this one burns out so much earlier than dreamed.

It can be seen on their faces as they trudge past the gathered horde of journalists. It is impossible to leave without facing the world's eyes and ears: each venue channels the athletes through a gauntlet of cameras and reporters waiting hungrily behind crowd-control fencing. Some lost champions will pause to speak of broken dreams, and for them there is a consolation prize in knowing that glory may have passed, but for the next few moments men and women with microphones want to hear what they have to say, what they feel about the battle that has come and gone.

It is those from foreign lands, far from home with no portal waiting to carry their sound, that leave with little more than the echoes in their minds. What do they think, in words most Canadians cannot understand? Who will ask them what it meant to be here, to stand for their country, and leave too soon?

This is the Olympics, the heart of a nation carried on slices of steel, whipped around a field of ice, heaved forward by waves of cascading cheers. The sports are merely the form, the essence is a wish to be heard, seen, and remembered.

On this day Jung-Su Lee of Korea stood most tall on the podium, the lone Korean after his two countrymen collided with each other on the final lap leaving silver for American Eric Heiden and bronze for his teammate JR Celski.

Long live the winners and the losers.