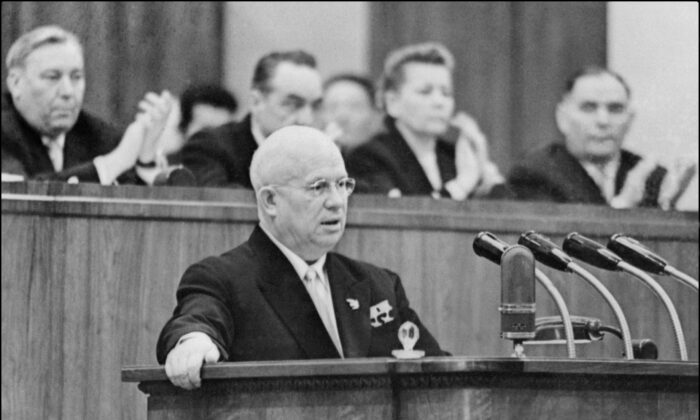 Nikita Sergeyevich Khrushchev addresses the Soviet Communist Party in Moscow, Russia, on February 1959. Khrushchev became the first secretary of the Party on the death of Stalin and was deposed in 1964, replaced by Brezhnev and Kosygin and went into retirement. (AFP via Getty Images)
Viewpoints

The Ghost of Nikita Khrushchev

How safe is Putin’s hold on power?

If Russian President Vladimir Putin looks over his shoulder, he might see Nikita Khrushchev.

On Oct. 13, 1964, the Central Committee of the Communist Party of the Soviet Union (CPSU) ousted First Secretary Nikita Sergeyevich Khrushchev from power in a soft coup. In an “emergency meeting” in the Kremlin, it was “suggested” to Khrushchev that he resign his positions as first secretary and chairman of the Council of Ministers.

The Central Committee and the Presidium accepted Khrushchev’s “voluntary request” the next day, and an end was put to his “erratic behavior” and secretiveness as the leader of the Soviet Union.

In recent days, Putin has also been accused by foreigners of “erratic behavior.” From The Hill, “Former U.S. Secretary of State Condoleezza Rice said that Russian President Vladimir Putin ‘seems erratic,’ adding he has an ‘ever-deepening, delusional rendering of history.’”

Her opinion is increasingly shared by others in the U.S. political class, including Democrats. James Clapper, former director of National Intelligence under President Barack Obama, has also referred to Putin as “unhinged,” as reported by Fox News on Feb. 28.

Is that the new narrative? That supposed “erratic behavior” warrants regime change? Is the increasing use of that phrase a possible harbinger of what might happen in Putin’s future? Is the ghost of Khrushchev beginning to haunt Putin?

Let us compare and contrast.

Khrushchev was a change agent in the Soviet Union for a decade that began when he became first secretary in 1953. He was the major transitional leader responsible for “de-Stalinization” of the Soviet Union. This involved the process of “first discrediting [Josef] Stalin and then reforming Soviet Russia leading to large numbers being released from imprisonment in Gulags, a temporary thaw in the Cold War, a slight relaxation in censorship and an increase in consumer goods,” according to ThoughtCo.

Khrushchev’s “secret speech,” which signaled the start of de-Stalinization, was given at the 20th Party Congress of the CPSU on Feb. 25, 1956, titled “On the Personality Cult and Its Consequences.” Ironically, before he was ousted, Khrushchev developed his own personality cult through antics such as allegedly banging his shoe during a United Nations General Assembly session in 1960 in protest of a speech being given by the Filipino representative, who accused the Soviets of using a double standard in proposing a Russian resolution condemning “colonialism.” Others considered that incident as proof of his erratic behavior.

Some of Khrushchev’s important—and frequently controversial—policies and programs are listed below:

When Putin rose from KGB obscurity to become president of the Russian Federation in 2000, his country was in debt, the Russian government was corrupt, and Russian military capabilities were in decay. He campaigned as a change agent against corruption and to transform the faltering Russian economy into a market economy “with Russian bureaucratic characteristics.”

Putin implemented political and economic reforms and launched legal actions against “corrupt” oligarchs, media personalities, and leading public figures. Through political manipulations while serving subsequently as premier and president, as well as the improvements in the economy that average Russians could see, he was able to retain power through a series of elections as the key Russian leader through the present. Putin has frequently addressed intentions to consolidate ethnic Russians into the Russian Federation, while silencing (and persecuting) domestic critics and railing against NATO and European Union expansion in Eastern Europe.

Putin has used the revenues from a growing economy and expanding oil and gas revenues to modernize the Russian military. He developed his own cult of personality through staged public appearances, including playing ice hockey with a crony, riding horses, and chopping wood while bare-chested.

Putin’s foreign ventures have included the Syrian intervention, suppressing “terrorism” in Chechnya, and meddling in Belarus, Georgia, and, most prominently, Ukraine. A first Russo-Ukrainian war was fought in 2014, which resulted in the Russian annexation of Crimea.

On Feb. 24, after weeks of force buildup on the Ukrainian border, Putin ordered the invasion of Ukraine. Putin’s stated goals have been consistent, as reported by Politico: the disarmament of Ukraine; the neutrality of Ukraine with no NATO membership; and formal recognition of Crimea as part of Russia.

Putin is as concerned about NATO missiles close to Russia’s borders as Khrushchev was about those Jupiter missiles in Turkey. Many observers also believe that an unstated Putin goal is the installment of a pro-Russian central government.

Sanctions have subsequently been implemented against Russian interests by the United States, EU, and other countries, including freezing of Russian overseas assets, banning Russian aircraft from EU airspace, personal sanctions on Putin and key supporters in his inner circle, and financial restrictions on the Russian Central Bank and other Russian banks. Even neutral Switzerland and Sweden have joined in.

Russian businessmen and civilians throughout Europe are considered persona non grata. Russian domestic support for the invasion of Ukraine is reportedly tepid at best, with significant anti-war protests being held in Moscow and other cities. As the invasion continues, military equipment and other material support is being provided to Ukraine from the EU, the United Kingdom, and the United States.

The longer the outcome of the war remains in doubt, the stronger Ukraine’s position becomes while Russia is concurrently weakened.

Domestic issues were a real root cause of Khrushchev’s demise. The Central Committee was generally supportive of his foreign policy decisions, but the food shortages brought about by his signature agricultural policies (blamed on “droughts”) led to considerable unrest, and he made a convenient scapegoat for the CPSU’s Presidium. He was also an arbitrary decision-maker who was supported by a small group of cronies—much like Putin—although of a different sort.

Khrushchev’s main support was from hardened communists while Putin’s cronies include oligarchs such as Gennady Timchenko (a major shareholder in Bank Rossiya), Boris Rotenberg (co-owner of SMP bank and SGM, the largest company dedicated to building gas pipelines and electrical power supply lines in Russia), and Igor Rotenberg (majority owner of the Russian oil and gas drilling company Gazprom Burenie). Along with Putin himself, all three have received personal sanctions that were added to long-standing sanctions from the UK and the EU, according to The National News.

Will domestic concerns result in Putin’s demise? The crippling sanctions will wreak havoc in the Russian economy and likely lead to a lower standard of living for most Russians.

Average Russians are already feeling the pinch. The Russian ruble’s value has fallen 30 percent as of March 1, making it worth about one U.S. penny. Some Russian banks have been forced to close ATMs with long lines at other banks as people rushed to withdraw their money and close accounts. Summer trips planned to Western Europe and elsewhere are now in doubt, if not already canceled.

FIFA and UEFA have suspended all Russian club teams and the national team from all competitions “until further notice,” as reported by CBS News. That might not seem like much to Americans, but soccer is the sport in Russia (and in most of the rest of the world).

And Russians are concerned about their sons, nephews, and grandsons who are fighting in Ukraine, not wanting a repeat of the body bags that returned from Afghanistan.

Putin’s cronies are sustaining losses, too. BP announced that it was withdrawing its 20 percent stake in the Russian oil giant Rosneft, which Reuters states could amount to as much as $25 billion.

The Chinese may not after all pick up the slack in hydrocarbon deliveries due to concerns about Russian sanctions. Their assets held in overseas banks have been frozen. The value of their portfolios has plummeted.

At what point will Beijing’s support for Putin begin to crack when no quick victory appears in sight? Did Chinese officials have any idea beforehand of the personal consequences that would accrue with the invasion of Ukraine? Do they detect any “erratic behavior” in Putin’s utterances and actions?

Will the $630 billion in bankrolled foreign currency reserves be enough to pull Putin through? Not if they are frozen.

Popular dissent. A potential crumbling of support from his inner circle. Erratic behavior. These led to the ousting of Khrushchev from power in 1964. Could Putin be facing the same fate for similar reasons in 2022? The ghost of Khrushchev may be nodding his head in Putin’s nightmares these days.