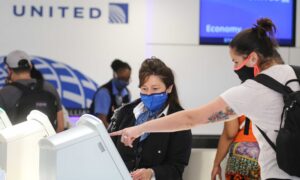 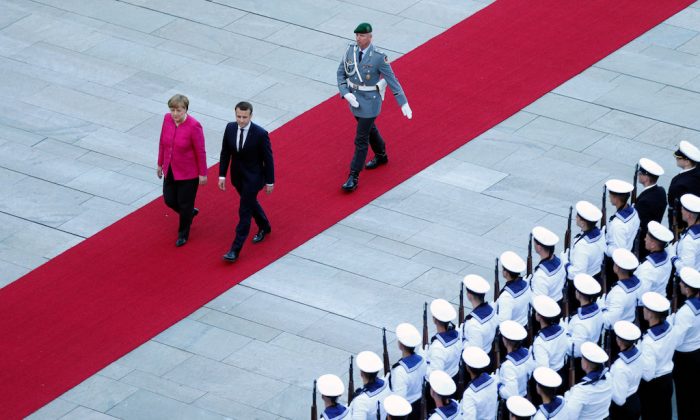 German Chancellor Angela Merkel and French President Emmanuel Macron arrive at a ceremony at the Chancellery in Berlin, Germany, May 15, 2017. (REUTERS/Hannibal Hanschke)
Viewpoints

The German–French Axis Heading Toward Isolation

Politics and reality diverge in Merkel's and Macron's Europe

The leaders of Germany and France, Chancellor Angela Merkel and President Emmanuel Macron, espouse a policy that their countries should lead Europe together. However, although the two leaders are politically and philosophically close, their countries want to go down different paths.

One point of commonality is their criticism of the Trump administration. They don’t like Washington’s protectionism and preference for bilateral relations rather than multilateralism.

However, they don’t talk about how their European Union is more protectionist than President Donald Trump’s United States. Let’s not forget that the Transatlantic Trade and Investment Partnership (TTIP) was already bound to fail long before the U.S. elections, mainly because of European opposition.

The two leaders agree on reforming the EU, making it more centralized and “harmonized.” This is also the policy of European Commission President Jean-Claude Juncker. At the same time, the EU grandes criticize democratic governments in the union as being illiberal and authoritarian, especially those in Central Europe.

Between the lines, they suggest that people in these countries elect governments that Merkel, Macron, and Juncker don’t like because they are not mature enough for democracy, a stance some leading European media are also taking toward the United States. Both leaders are also very critical of Russia and advocate a strong regime of sanctions.

However, economic necessities do not necessarily support the axis between Chancellor Merkel and President Macron and their political philosophies.

Merkel recently had to deviate from a common policy due to economic and political realities at home. Germany at large is concerned that a more centralized union with a common Ministry of Economy and Finance would result in a transfer union with a continuation of high deficit spending. Germans find this unacceptable while France and the French are in favor.

Germany and France justify some of their criticism toward Russia and the United States by pretending to be “liberal democracies.” The system, however, has little to do anymore with classical liberalism and puts the political narrative at odds with the economic forces on the ground in the European Union while alienating their most important trade and defense partner.

Former British diplomat and consultant Timothy Less explains this well in his essay “The Dawn of Post-liberalism,” in which he writes: “[Classical] liberalism believes in free markets and competition as the optimal means of promoting growth. It seeks to minimize the role of the state, which exists mainly to uphold the rules of the market. And it supports the unrestricted movement of goods, capital, and workers across international borders.”

Contemporary liberalism, especially in the European Union, “is a complex amalgam of rationalism, cosmopolitanism, social democracy, Marxism, and bureaucratic authoritarianism,” he writes.

We see here a transformation of a decentralized democracy to a centralized bureaucracy. Centralization already laid the groundwork that led to Brexit. Bashing Central Europe as “immature” and “illiberal” will further estrange it from the EU.

German policies favor harsh sanctions on Russia on the one hand and neglect to invest in defense on the other. Sanctions combined with an insufficient deterrent do not work.

Undoubtedly, Germany and France together form an essential part needed for a strong and competitive Europe. At the moment, however, this axis is doing its best to hurt relations with the United States and Russia. It will also damage the cohesion of the bloc with too much centralization and the moral arrogance of bureaucrats pretending to be “liberals.”