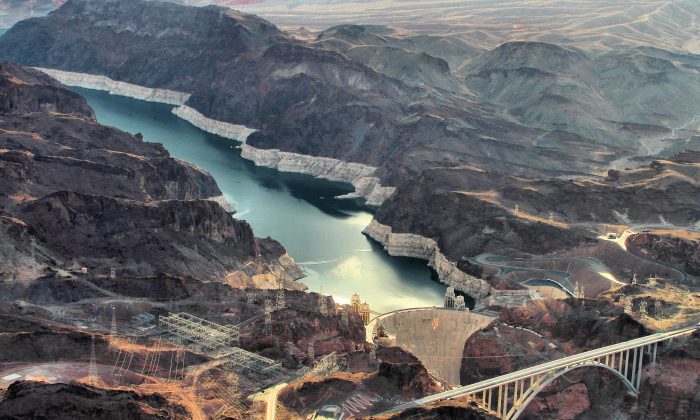 The Hoover Dam on the Colorado River is operating at 30 percent capacity, and new turbines have to be installed at lower elevation because of low precipitation and drought. (Airwolfhound/Flickr, CC BY-SA)
Environment

The Future of Hydro in a Warming World

People have harnessed energy from moving water for thousands of years. Greeks used various types of water wheels to grind grain in mills more than 2,000 years ago. In the late 1800s, people figured out how to harness the power to produce electricity. Throughout the 20th century and into the 21st, hydropower has expanded, producing about 17 percent of the world’s electricity by 2014 and about 85 percent of renewable energy—and it shows no signs of slowing.

According to the online magazine WaterWorld, “An expected 3,700 major dams may more than double the total electricity capacity of hydropower to 1,700 GW within the next two decades,” —including in my home province of British Columbia, Canada, where the government has started a third dam on the Peace River at Site C. “Hydropower is the most important and widely-used renewable source of energy,” the U.S. Geological Survey says.

But how “green” is hydropower, and how viable is it in a warming world with increasing water fluctuations and shortages? To some extent, it depends on the type of facility.

The Center for Climate and Energy Solutions notes some large dams are used mainly for water storage or flood control with power generation an additional function, while some are used primarily to generate electricity. Small hydro such as run-of-river is installed on running water and doesn’t use water stored in reservoirs. Pumped storage facilities don’t generate additional energy, but store energy by pumping water from a lower reservoir to a higher one when demand and price are low, sometimes using renewable energy, and release water through turbines when price and demand are high. All have varying environmental impacts.

One of the biggest trade-offs with large-scale hydro facilities is that building them often means flooding land used for farming and human communities. Damming rivers also impedes fish—even with technologies like fish ladders—and can harm wildlife habitat and alter river temperatures, dissolved oxygen levels and flows. And while hydropower creates fewer pollution and climate problems than fossil fuel power, it isn’t entirely clean. Clearing vegetation to build a dam and flood land can release greenhouse gases. And as vegetation decays and water levels fluctuate, methane—a greenhouse gas far more potent than carbon dioxide—can build up and escape from reservoirs.

Ironically, although hydropower is seen as an energy source that helps slow global warming, in many areas its viability is threatened by climate change. Rising greenhouse gas emissions and a warming world affect the entire hydrological cycle—surface and ground water, glaciers, precipitation, runoff, and evaporation. Shifting precipitation patterns and increased droughts are changing water levels in rivers and behind hydro dams.

The massive Hoover Dam on the Colorado River is operating at 30 percent capacity, and new turbines have to be installed at lower elevation because of low precipitation and drought. In Nepal, “low water levels rendered a brand-new dam project ineffective and cut off the water supply farther downstream,” said John Matthews, director of fresh water and adaptation at Conservation International, in Scientific American.

Matthews and coauthors of a study in the journal PLoS Biology wrote that climate change puts 40 percent of hydro development investments at risk. They recommend an approach to dams and hydro that takes climate change into account, by building projects in stages so adjustments can be made as more is known about climate patterns, or by “building with nature” rather than on top of it.

Meanwhile, as more environmentally benign power technologies become increasingly cost-effective and viable, the U.S. is removing older dams, many of which don’t have fish ladders, because costs to maintain and repair them are too high, as are environmental impacts.

Hydropower will remain part of the clean-energy equation, but we need to find the least disruptive, most efficient methods. Scientist Peter Gleick, president and cofounder of California’s Pacific Institute, says the key to supplying energy to growing populations in a warming world will be to use a diversity of power sources. “We need to design our energy systems to be resilient in the face of growing uncertainty about technology and climate and national security and all of the factors that affect energy,” Gleick told online magazine Slate.