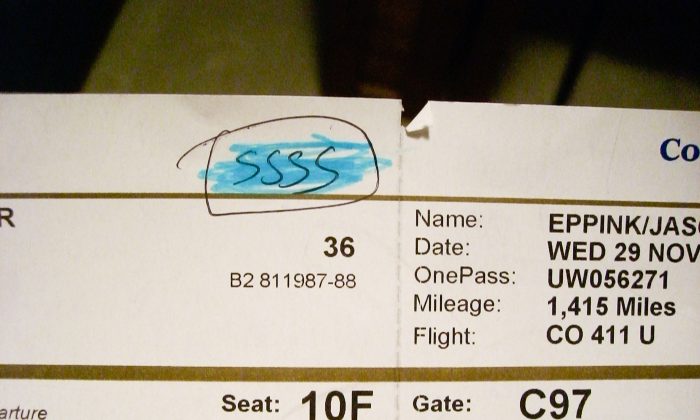 The code "ssss" for Secondary Security Screening Selection on a boarding pass. ("Close up on the SSSS" by Jason Eppink/Flickr ll CC BY 2.0 ( ept.ms/2haHp2Y)
US News

The 4 Most Dreaded Letters on Your Boarding Pass

If you see “SSSS” written on your boarding pass, you may be in for some trouble at the airport.

Boarding passes labeled with this code subject their carriers to extra scrutiny, costing them time and possibly their flight, if they don’t arrive at the airport early enough.

SSSS stands for Secondary Security Screening Selection and it is what the Transportation Security Administration (TSA) uses to mark certain passengers traveling into the United States for extra screening.

Those whose boarding passes are marked with the code report not being able to print their boarding passes at home or from a kiosk at the airport, and receiving a pat down or bag search while going through security. Sometimes SSSS-selected passengers are required to submit more information, such as detailed info on their travel plans.

And if someone isn’t OK with the added layer of security, they won’t be allowed on their flight, customs defense attorney Seth Weinstein says.

The TSA claims that passengers given the code are chosen at random by a computer, or by screeners who look for “irregularities” on a person where weapons could be hiding. However, insiders say otherwise.

Speaking on condition of anonymity, an official told the Associated Press that passengers can also get on a “selectee list” if they frequently buy tickets in cash or get one-way flights into the country.

If you have a passport from a country like Iran, Cuba, or North Korea, you are automatically marked as a “selectee” for extra screening, a leaked 2008 TSA document says.

Also, sometimes a criminal record can get a person on the list, or if you have a history of bad behavior while flying, Weinstein said.

Just because someone has “ssss” written on their boarding pass, however, doesn’t mean they will get extra screening every time. Only those who are put on the “selectee list” will routinely get more inspection.

The good news is, there is recourse if you are put on the selectee list—if you think you have been put on the list unfairly, you can apply to the DHS Traveler Redress Inquiry Program.

The SSSS program was implemented in the wake of the 9/11 attacks, and in 2015, TSA said it increased its use of these random searches to catch suspected terrorists. It also started doing more pat-downs and restricting items on board, such as liquids and laptops.