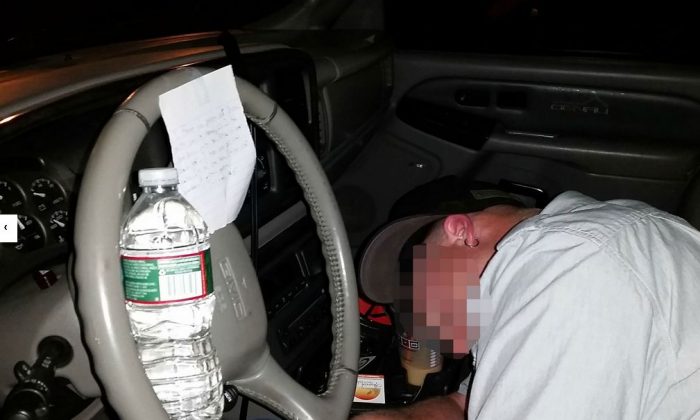 ‘The Drunk Knight’ Helps Intoxicated Man at the Wheel

A Massachusetts man passed out drunk behind the wheel of his car, and it appear that a good Samaritan (who has a sense of humor) was looking out for him.

He woke up with this note:

“I found you passed out Drunk with your car running, so I hid your keys under the Atlas in your backseat. I hope you got home safe. I’m not your hero. I’m your silent guardian. A watchful protector.

Mysterious ‘drunk knight’ tries to help man he finds slumped over at the wheel http://t.co/ih1yyjjtX6 pic.twitter.com/epbQ2g6hyG

The photo of the note was posted by a user on social media sites calling himself “Krazy_Legs.” It’s not clear what happened to the man who passed out.

The Reddit user who apparently is “The Drunk Knight” also wrote: “I found this guy passed out drunk with his car running outside of a bar at 3.00am.

“The bars close at midnight where I am, so I tried to wake him up, but he just kept mumbling and continued to sleep.

“I decided to hide his keys in the backseat, just in case a cop came, and left him a note and some water.