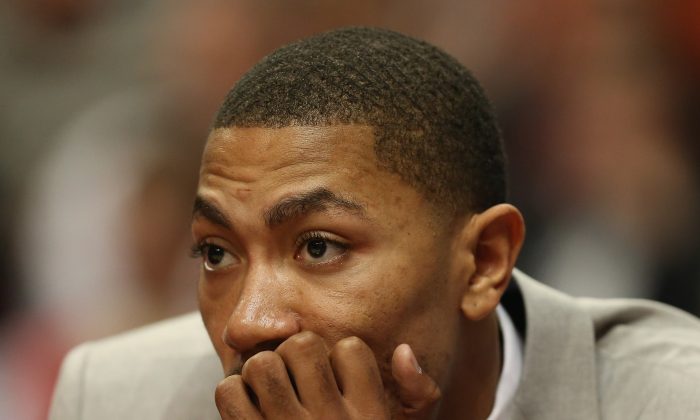 Derrick Rose of the Chicago Bulls watches from the bench as his teammates take on the Miami Heat in Game Three of the Eastern Conference Semifinals during the 2013 NBA Playoffs at the United Center on May 10, 2013 in Chicago, Illinois. (Jonathan Daniel/Getty Images)
NBA

Derrick Rose has confused the whole NBA environment about his return to the court, including the Chicago Bulls. The 2010-11 MVP has not played a single game this season, stopped by a torn ligament in last year’s playoffs against Philadelphia.

Thousands of words have been wasted on his physical condition, on the long time he took to recover, and on the rumors around his fear to return to the court, that is likely to be the main justification. But only he knows the truth, and perhaps not even his team. The latest rumor is now giving hope to all those fans who want him back in the game (who wouldn’t?) is that Derrick will be on the bench at some point in the series between Chicago and Miami (Eastern Conferenze semifinals) and should be fit to play a few minutes.

This is the question: is he ready? Medical reports confirm that by January 31 Rose had returned to training with physical contact. But there’s been no trace of him in the games. As the season wore on, it was expected to happen sooner or later, but we are almost at the end and no one has any clue about what’s going on. Despite insiders who saw him training and reported his knee to seemingly respond well, he never said a word during the regular season, and the playoffs are halfway done. The solution of the case is not simple and, though physically the player has recovered, the problem seems to be essentially psychological. It is also clear that the more time passes, the more difficult it becomes to fix that, putting at risk his entire career.

In addition, as if that were not enough, the pressure around the guy is increasing, being squeezed between the needs of the sponsors–as for the Adidas TV commercial showing Chicago waiting for the return, broadcast for over a year–and the continuous comparison with his teammates pushing harder withou him. If we see him on the bench or even on the court for a few minutes of Game 4, it would probably be just a taste for him and for us. But it’s more likely that Derrick Rose will not play a single minute of 2012-2013 season and Bulls will have to come to terms with this intricate situation over the summer.

Marco Barzizza is an Italian sports journalist, born in Pavia in 1985. In January 2012, he created the editorial project Intervista Sportiva, for which he is editorial responsible. He has collaborated with the most important Italian national sports publications such as Sky Sport 24, Gazzetta dello Sport, Sportmediaset, Datasoprt, Agr, Eurosport.