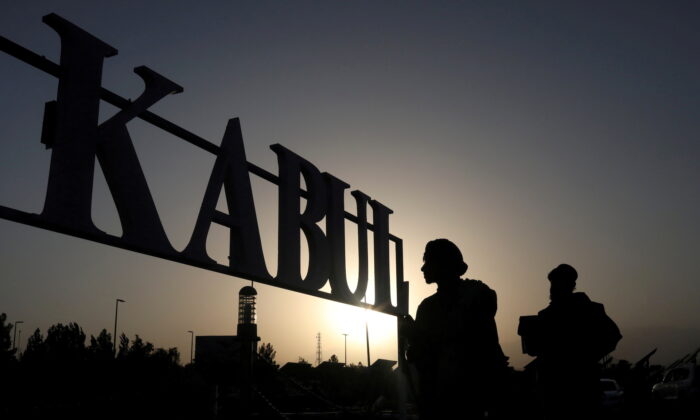 Taliban terrorists stand in front of a sign at the international airport in Kabul, Afghanistan, on Sept. 9, 2021. (West Asia News Agency/Reuters)
Thinking About China

Chinese “wolf warriors” and their sycophants in China’s state-run media have been crowing for weeks about the strategic defeat suffered by the United States in Afghanistan.

During a telephone call on Aug. 16, Chinese Foreign Minister Wang Yi claimed that the U.S. Secretary of State expressed hope that China would help in “stabilizing Afghanistan.” Here is an agitprop headline from state-run China Daily on Sept. 27 that reinforces the Chinese regime’s goal to replace the United States in world leadership: “US leaving Afghanistan signals accelerating end of its hegemony.” The PLA Daily took its agitprop shot with an article titled, “Why US military interference constantly ends in debacles,” claiming that since the end of World War II, “the US has never stopped invading other countries, fighting ‘proxy wars’ and supporting pro-America regimes.”

Part of the Chinese Communist Party’s (CCP) propaganda offense has been aimed directly at Taiwan by planting seeds of doubt in President Tsai Ing-wen’s inner circle of military and domestic advisers as to whether the United States and its allies would truly come to their aid in the event of a cross-channel kinetic attack by the People’s Liberation Army (PLA). Toward that end, note this headline from China Military Online, “What US retreat from Afghanistan means for Taiwan.” That article claims that Taiwan is “just a card that can be played”—and as easily discarded—by the United States depending on the situation.

The preceding represent the propaganda associated with the messages that the CCP would have the world believe in support of its geopolitical goals to achieve world economic and military dominance: the United States is in decline, the United States cannot be trusted to live up to its agreements, the United States will bail out on allies when it is convenient to do so, etc. But are those the real “lessons learned” from Afghanistan, or are there some far more important lessons that are in the process of being learned?

As the world’s premier constitutional republic, the United States has been historically able to change courses of action and policies that have failed—through vigorous debate and the reaching of consensus, both within the political class and also among the citizenry at large, about strategic goals and objectives and associated required actions. The Civil War abolished the institution of slavery, with the passage of the 13th, 14th, and 15th Amendments, the 1964 Civil Rights Act, and other legislation completing the process of fully integrating black Americans into U.S. society. Long-standing U.S. isolationism was set aside during World War I and World War II to deal with national security threats, with the defeated countries subsequently converted to strong allies through U.S. economic and security investments. South Korea was saved from being overrun by the Chinese military during the Korean War.

But since then, the commitment of the U.S. military to overseas ventures has seemingly gone off the rails for a variety of reasons.

Much has been written about the inept withdrawal of U.S. forces from Afghanistan, and much more will be discerned as Congress interrogates the decision makers who were involved in the debacle. Serious corrective actions are entirely possible, as the root causes are identified and debated. Some of these include the following:

The CCP sees Afghanistan as an inflection point in world history that demonstrates that the balance of geopolitical forces is shifting in favor of its own long-term strategic goals. It would be happy if the United States were to retreat from treaty obligations, the defense of human rights around the world, and international conventions and organizations established in the aftermath of World War II. That’s not going to happen.

If anything, the last year and a half has red-pilled Americans and many other people around the world as to China’s long-term intentions and the aggressive means being used by the CCP in pursuit of those objectives. The CCP’s aggressive tactics include the following:

In light of the above CCP aggression, does the “rest of the world” wish to see the United States replaced as the world leader by communist China? Recent actions would indicate otherwise. As the old idiom goes, “necessity is the mother of invention.”

The aforementioned items have driven neighboring nations into each other’s arms. The following are a few examples:

But what has the United States itself learned in the wake of Afghanistan, and how might the chaotic withdrawal from Kabul serve to reset U.S. foreign and national security policies, especially in the Indo-Pacific in response to continued Chinese aggression?

Republican senators (and others) are pushing the Biden administration for more forceful actions in responding to Chinese statements in the aftermath of the evacuation. They also seek accountability for the disorganized withdrawal and the poor decision making that was involved. Will this pressure result in a change in U.S. policy relating to the commitment and withdrawal of U.S. military forces overseas? The door could finally be opening for achieving consensus on a policy that involves the following key points:

Then, let the chips fall where they may, including in the South China Sea. In naval parlance, the new policy would be a badly needed “shot across the bow”—and decidedly NOT the U.S. lesson learned and corrective action from the Afghanistan disaster that the CCP is seeking.