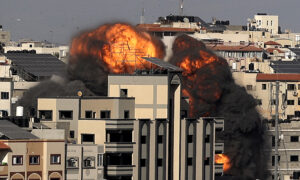 Voters stand in line to cast their ballots during the first day of early voting in the U.S. Senate runoff, in Atlanta, Ga., on Dec. 14, 2020. (Jessica McGowan/Getty Images)
Viewpoints

I don’t know if Niels Bohr, Nostradamus, Samuel Goldwyn or Yoga Berra was the first to use the phrase “Predictions are difficult, particularly about the future,” or one of its many variants, but I think most of us would agree that they all have some validity.

Nevertheless, I’m going to go ahead and make a big one and, yes, it involves that other hoary proverb about it always being darkest before the dawn, since we seem to be in a very dark period, but… here goes…

The Democratic Party is headed for epochal electoral disasters in 2022 and most probably 2024. They will be trounced by a renewed GOP.

And I’m saying that even factoring in what many on the right believe with increasing justification—a lot of cheating has been going on.

Yes, it will still be there in those years, but not as much because the number of people watching is going up exponentially.

America is poised for a big reaction. And I’m not a Pollyanna… well, not completely. I’m just a one time high school physics student who remembers Newton’s third law about action and reaction.

The big winner in those coming elections will be the Trump-DeSantis party, in whatever order emerges, and among the big losers, besides the Democrats, will be the thirty-five House Republicans who voted for a Jan. 6 investigation, however few of them are left after primary season.

Due to the overwhelming majority of the media (which few pay attention to anymore), the academy (a self-immolating problem I will get into in a moment) and their own extreme leftwing, the Democrats are losing contact with the American people on a daily basis.

In their gigantic, seemingly endless, spending programs, they ignore the obvious, spoken aloud by Bill Clinton in his 1996 State of the Union and not really contradicted since: “The era of big government is over.”

But didn’t it come back with COVID? Not much apparently.

In a new Rasmussen poll voters prefer small to big government by the significant margin of 55 percent to 37 percent. They also, in a poll only a week or two before, prefer capitalism to socialism by more than three to one—65 percent to 18 percent. (Yes, Rasmussen tilts Republican but his record has historically been among the most accurate—and these aren’t close calls.)

At the same time, the American people—white ones anyway—have been informed by leftists, people of color who believe those same white people (a significant percentage of whom came from societies where they were oppressed themselves) are oppressing them, the media, and the academy that they (read: all whites) are unremittingly racist.

Whites were, in Lady Gaga’s words, “born that way.” Only by being “anti-racist”—whatever that means; it’s constantly changing—can they possibly be reformed. And even then it’s moot.

Most whites (and a number of non-whites too, I’d wager) started by just nodding their heads or changing the subject when this idiotic nonsense came up, hoping it would go away.

It didn’t. It got worse. Now we have critical race theory to deal with, an idea so evil in its conception—so straight out of Goebbels despite its intellectual pretensions—you couldn’t devise a better way to create racism where it didn’t exist, beginning in kindergarten. Good-bye Martin Luther King and judging us all by our characters. Hello, you are your skin color.

Not to mention the sudden appearance of that old canary in the coal mine, anti-Semitism, that is now raising its wretched head in practically every Democrat-controlled big city out there, crazed Hamas supporters demanding to know the ethnic background of innocent LA sushi diners, bombs going off in the Diamond District of New York.

Enter Newton’s third law: action begets reaction. Only in this case the reaction will dwarf the initial action. More people than you can imagine have about had it with the American left in its present incarnation and are ready to explode.

These folks used to be called the Silent Majority, but they’re suddenly becoming not so silent anymore. That those who are still have a secret ballot is just icing on the proverbial cake.

Over the last few years, many were afraid to express their opinions in public, for fear of work or social repercussions. This is diminishing—and surprisingly rapidly.

Here in Tennessee—and from reports many other states as well, almost all red states (the majority)—we are seeing an incredible amount of grass roots organizing especially against critical race theory, largely by mothers who are appalled by this evil ideology being inculcated into their children from the age of four.

People are rallying against the crypto—(well, actually not so crypto)—Marxist educational system all across the country. Do what you want, but stay away from our kids. That’s their red line, in more ways than one.

I have never seen so much of this kind of organizing on the right. The Democrats and their media friends made a critical mistake supporting CRT, just as they have made a mistake in not separating themselves from Antifa and BLM violence.

Some of them realize this—it’s so obvious; how could they not—and for this reason as well as to distract from the ongoing electoral fraud investigations in multiple states, the Democrats have put so much effort into magnifying (and investigating) Jan. 6.

But this is not stopping the electoral investigations that are going forward in those states, nor is it stopping something that will surprise you that I bring up at this late date—the John Durham-led investigation into the Trump-Russia collusion fraud.

Most had given up on it in its entirety. I had myself at times. But looked at from afar, the later (i.e., the closer to 2022) this is delivered or indictments are made the better.

Just the other day, George Papadopoulos (remember him?)—a man with a more than a passing interest in this investigation—popped up in an interview with Jordan Conradson of The Gateway Pundit (a website some thought at one point over the top in its criticisms of the Left, but that has become increasingly vindicated in its accuracy).

“George: My opinion is that Durham is very real …. I know who he has interviewed in October 2019. Specific guys with the U.S. intelligence community that should not have been meeting with me, this infamous Australian diplomat. We know he’s spoken to the Italians, to various governments. He has been working non-stop since 2019 where I think he got all the juicy info back then. Then Barr appoints some special council a month before Biden goes to the White House, and now Durham is simply, in my opinion like I said, I don’t talk to Durham, he’s waiting for the right moment to expose what he has learned and I think it is going to be tantamount to conspiracy in the Obama administration. I truly believe that. I think he is incredibly real and I would actually put my entire reputation on the line saying this …. It’s going to be very interesting to see when and how that information comes out, how the media tries to deflect or cover it up.

“Conradson: Do you have an estimate of when that information might come out?

“George: I think by this summer we’re going to have a final conclusion on Durham. [Yes, we’ve heard that one multiple times before, but still…ed.] This thing can’t last forever but I just think he’s giving Biden over 100 days to start really dropping what he has. And if he has nothing, I’m on the record of saying I put my reputation on the line regarding Durham.”

And I’m putting mine on record regarding the elections of 2022 and 2024. It’s up to those reading this to prove me right. (Don’t let me down.)