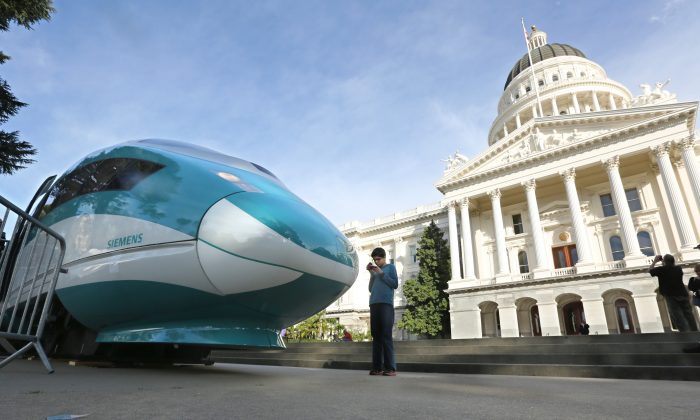 In this file photo, a full-scale mock-up of a high-speed train is displayed at the Capitol in Sacramento, Calif., on Feb. 26, 2015. (Rich Pedroncelli/AP Photo)
Viewpoints

The Choo-Choo Boondoggle That Wouldn’t Die

It’s alive. The California High-Speed Rail boondoggle, that is.

In explaining parts of his new budget proposal, Gov. Gavin Newsom issued a statement on Jan. 13: “The California Blueprint includes a proposed $9.1 billion package to advance clean transit initiatives that support the state’s climate and public health goals, promote equity and bolster the green economy,” including “a $4.2 billion investment in California’s High-Speed Rail project, which will eventually share the electrified Caltrain corridor.”

What a change from three years ago, when he announced in his Feb. 12 State of the State address, “Next, let’s level about High-Speed Rail. I have nothing but respect for Governor Brown’s and Governor Schwarzenegger’s ambitious vision. I share it. And there’s no doubt that our state’s economy and quality of life depend on improving transportation.

“But let’s be real. The project, as currently planned, would cost too much and take too long. There’s been too little oversight and not enough transparency.

“Right now, there simply isn’t a path to get from Sacramento to San Diego, let alone from San Francisco to LA. I wish there were.”

However, he did concede, “We do have the capacity to complete a high-speed rail link between Merced and Bakersfield.”

What’s changed, of course, is the tight budget days of 2019 have been replaced with the cornucopia of surpluses the past two years. Like one of those people who wins $436 million in the lottery and blows it all in a year, he’s eager to spend and spend and spend.

Yet Reason magazine reported in October, “Last month, the California State Legislature adjourned without acting on Gov. Gavin Newsom’s recommendation to issue the remaining $4 billion of high-speed rail bonds approved by the state’s voters back in 2008. Without the bond proceeds, the California High-Speed Rail Authority will not be able to meet its intermediate objective of establishing service along 171 miles of electrified track between Merced and Bakersfield.”

Despite the surpluses, the Legislature so far has remained skeptical of continuing funding for the project. Maybe that’s because the California High-Speed Rail Authority itself reports, “The current cost estimate to deliver the 500-mile system linking San Francisco to Los Angeles/Anaheim via the Central Valley ranges from $69.01 to $99.9 billion.”

While the full system would have benefitted most of the state, especially the large population centers of the Bay Area and Los Angeles, the shrunken system would only help the more sparsely populated area between Merced, population 82,662, and Bakersfield, 377,917.

As Reason noted, if the Legislature wants to fund mass transit, it better could spend the funds improving “the fixed-route bus service in cities like Los Angeles and San Francisco. Buses are a transportation service that California residents and workers actually use.”

Few remember the promises from the official voter pamphlet (pdf) for Prop. 1A: “Of the total amount, $9 billion would be used, together with any available federal monies, private monies, and funds from other sources, to develop and construct a high-speed train system that connects San Francisco Transbay Terminal to Los Angeles Union Station and Anaheim, and links the state’s major population centers, including Sacramento, the San Francisco Bay Area, the Central Valley, Los Angeles, the Inland Empire, Orange County, and San Diego. …

“Phase I of the train project is the corridor between San Francisco Transbay Terminal and Los Angeles Union Station and Anaheim.”

In their argument (pdf) in the ballot pamphlet, proponents promised, “Proposition 1A will save time and money. Travel from Los Angeles to San Francisco in about 2½ hours for about $50 a person.” A big supporter was Gov. Arnold Schwarzenegger.

But consider the timeline. The Lehman Bros. bankruptcy hit on Sept. 15, too soon to process for the election seven weeks later. The next January, Schwarzenegger submitted a new budget warning of massive deficits unless the legislature passed a $13 billion tax hike. It did so. Unemployment soared in California to 12.4 percent in Nov. 2009. In that climate a year after the vote, Prop. 1A would have failed.

At the time it passed, I predicted two things: First, the whole project never could be built. Second, the $9.95 billion in the bond all would be spent anyway, plus whatever extra money could be grabbed, on portions of the project to benefit favored contractors and other interests.

That’s exactly how things have turned out.

The reality is California already has a high-speed rail system connecting the major cities with cheap trips of an hour or less, sometimes for fares as low as $39 one way. The trains even sport wings. They’re called airplanes.