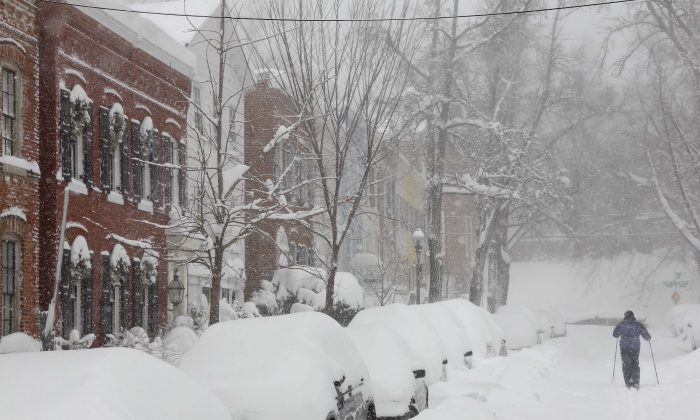 FILE - In a Wednesday, Feb. 10, 2010 photo, A person uses cross country skis to get up 26th Street NW near P Street in the snow in Washington. The mayor of the nation's capital and other politicians are feeling heat for not moving faster to clear the streets of snow after the historic back-to-back blizzards that slammed the East Coast. (AP Photo/Alex Brandon,, File)
US

The Blizzard Forecast for the Washington, D.C., Area Just Got a Lot Worse–Here’s How

Snowfall projections for the Washington, D.C., area have been climbing in the past 24 hours, with some predicting over 2 feet of snow.

The National Weather Service updated its previous projections on Friday morning, saying “over 2 feet” of snow will likely hit the capital with another six inches or more hitting to the west and southwest of the city.

If the blizzard does indeed drop that much snow, it would compare to the Knickerbocker Blizzard of January 22, which saw around 28 inches of snow drop around D.C.

More specifically, the service says the snow total in D.C. will be about 25 inches, with an upper limit of 32 inches and a lower limit of 12 inches.

Snow is expected to start falling on Friday afternoon and continue through Saturday night.

The service said that the blizzard will bring “potential life-threatening conditions.”

“Heavy snow and blowing snow will cause dangerous conditions and will be a threat to life and property,” it said in an alert. “Travel is expected to be severely limited if not impossible during the height of the storm Friday night and Saturday. Visibility will be reduced to near zero at times in whiteout conditions.”

The Capital Weather Gang noted that the heavy snow accumulation could cause some poorly built roofs and structures to collapse.

“This is a serious and life-threatening winter storm. Preparations should begin today and be completed by Friday afternoon. Wherever you happen to be Friday evening, plan to potentially be there into Sunday or early next week,” it noted.