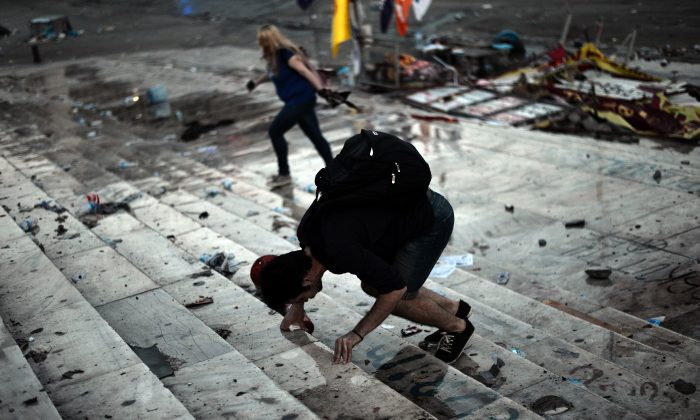 A protester reacts to tear gas during clashes at Taksim square in Istanbul on June 11, 2013. Riot police fired tear gas and rubber bullets to clear protesters from the square as Turkish Prime Minister Recep Tayyip Erdogan warned he would show 'no more tolerance' for the unrelenting mass demonstrations against his government. (Aris Messinis/AFP/Getty Images)
Middle East

The Battle for Taksim Square

ISTANBUL—It’s the smoke of the tear gas, the smoldering fires, the burned out barricades, and the marks left by gasoline bombs scattered on the ground that make Istanbul’s Taksim square look like a battlefield.

On Tuesday hundreds of police descended on the square in central Istanbul to clear it of protesters. It was the greatest show of force in one and a half weeks, after protests sparked by police intervention in protests against the construction of a shopping mall on a park on Taksim Square.

Police actions continued into the night. Around midnight protesters, some holding banners, could still be seen gathered on the park grounds on the square with a hundreds of police present on the square, occasionally firing tear gas. Bulldozers started to remove some of the barricades.

“Out of the blue, we heard a loud banging noise and subsequently, gas surrounded us. In fact, they fired them at our escape route, trapping us with gas. The woman behind me was crying “I’m dying, I’m dying”. Your lungs burn so badly that you feel like they are bleeding,” said one of the protesters present on Taksim square at the time of the police intervention, who wished to remain anonymous for safety reasons.

“Police fired tear gas bombs at the crowd at Gezi Park indiscriminately. There were people of all ages,” the protester said.

Istanbul Mayor Huseyin Avni Mutlu said in a televised announcement Tuesday that “we will continue our measures in an unremitting manner, whether day or night, until marginal elements are cleared and the square is open to the people,” according to Reuters.

Turkey’s Prime Minister Recep Tayyip Erdogan said earlier in the day, “What were we supposed to do? Kneel in front of these people and ask them remove the banners? How would those illegal rags be removed from public buildings?” according to Turkish newspaper Hurriyet Daily.

Erdogan called on protesters to “see the big picture, understand the plot, and withdraw from the streets.”

Some of the protesters could be seen hurling gasoline bombs and stones at police earlier in the day.

Other protesters say they distance themselves from those actions, and insist they want to have a peaceful protest.

Earlier in the day police arrested 49 lawyers who had gathered at the Caglayan courthouse in Istanbul, all of them were released after being taken to the police office.

The ongoing protests reveal discontent among parts of Turkish society with Erdogan, and resemble similar protests that swept across the Arab nations in 2011. Turkey was then seen as a role model for some of the young democracies in the region.

But protesters say that Erdogan has become increasingly authoritarian and conservative in his decade long rule, citing limitations on the sale of alcohol and restrictions on free speech.