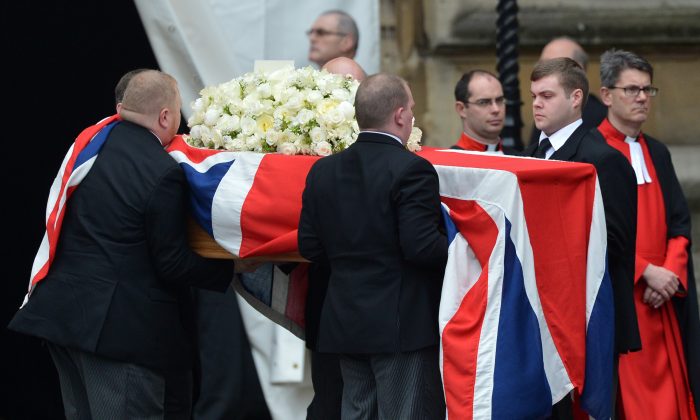 Pallbearers carry the coffin of British former prime minister Margaret Thatcher into the hearse as it leaves the chapel of St Mary Undercroft at the Houses of Parliament (MIGUEL MEDINA,MIGUEL MEDINA/AFP/Getty Images)
Special

As mourners gathered for Margaret Thatcher’s funeral, London’s most famous landmark fell silent as a mark of respect.

The funeral hearse left Westminster at precisely 10am, its progress followed on national TV, and on any other day would have been accompanied by the characteristic chime of the famous clock that stands above the Houses of Parliament.

A controversial decision by the Speak of the House, John Bercow, means the bells will remain silent for 3 hours during the funeral of the former Prime Minister

The bells of Big Ben were last silenced out of respect nearly half a century ago, for Sir Winston Churchill’s funeral.

The decision to silence the clock has been seen by some as yet another move towards a de facto state funeral.

The Speaker told MPs on Tuesday: “I have received a number of representations, direct and indirect, formal and informal, concerning how the house and parliament as an institution might best mark this occasion.”

“I believe that there can be a profound dignity and deep respect expressed in and through silence and I’m sure that the house will agree.”

Margaret Thatcher was a divisive political figure in life, and the handling of her death has also been divisive. Politicians and officials have been trying to navigate the line between respecting the death of a highly influential former stateswoman and the strong feelings and arguments that still surround her political legacy.