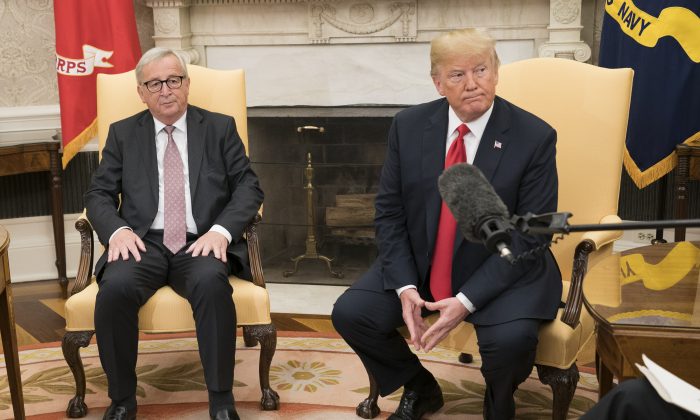 US President Donald Trump (R) meets with President of the European Commission Jean-Claude Juncker, in the Oval Office at the White House in Washington, DC on July 25, 2018. (Kevin Dietsch-Pool/Getty Images)
Viewpoints

His aggressive negotiation tactics have opened the doors to freer trade

When U.S. President Donald Trump announced higher tariffs on the import of some European goods, Brussels first reacted self-assuredly and threatened retaliation. This did not impress Washington.

When European Commission President Jean-Claude Juncker and Trade Commissioner Cecilia Malmstrom visited the White House on July 25, however, it showed the European Union realized it had more to lose in a tit-for-tat trade row than the United States.

Even during his 2016 campaign for president, Trump announced that he would address the issue of trade imbalances, especially with China. And it is true that China is extremely protectionist when it comes to its own market—not only through the use of tariffs but also bureaucratic hurdles, quotas, intellectual property appropriation, and other measures. Furthermore, China subsidizes its exports and illicitly acquires technical know-how. It is correct to claim that China is strongly engaged in unfair trade practices.

A U.S. reaction to these practices is overdue. But unfortunately, it’s not only China that is very protectionist, while pretending to be all for free trade. The European Union uses mostly regulatory barriers under the pretext of consumer protection. The Transatlantic Trade and Investment Partnership was never concluded due to European fears of American competition. A certain consolation for this failure is that the treaty’s complexity may have made it inefficient.

The American frustration is understandable. Using its unfair practices, China runs a huge trade surplus with the United States, which is also shown by the huge amounts of U.S. dollars that China holds. Retaliation for China’s unfair practices is necessary and justified, although the U.S. manufacturing sector also has to improve quality and productivity.

It must be irritating for Washington to observe how Beijing uses the dollars it receives from its trade surpluses to garner influence in many countries through investments and loans. This is against the United States’ long-term strategic interest.

The case with Europe is slightly different, as European countries do not subsidize their exports to the U.S. However, Europe also runs a surplus. Here, the main bone of contention is European import barriers. In general, European import tariffs are higher than those of the United States. The EU’s regulatory barriers are also substantial, and the European agricultural market benefits from big subsidies.

It appears that the EU and the United States are now agreeing to resolve the conflict. This could be a huge opportunity for the EU to reduce its protectionist stance, to the long-term gain of its member countries, and global trade in general.

I have frequently highlighted the merits of true free trade and the benefits for Europe, if the EU would end its discriminatory measures—of both the tariff and nontariff varieties. Let’s hope that both sides will take advantage of this opportunity to increase global prosperity. Maybe, in the end, Brussels will have to say, “Thank you, President Trump.”