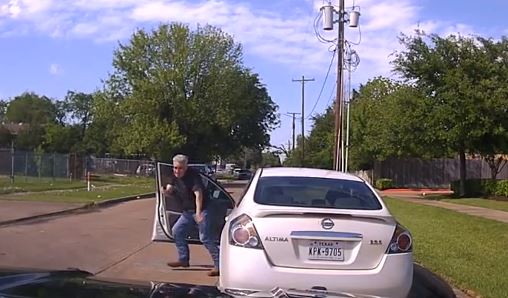 A police officer in Texas who was confronted by an armed man engaged in a shootout with the suspect and ultimately killed him.

The situation unfolded in Pasadena on Thursday, March 29.

The man allegedly ran a stop sign before being pulled over.

The suspect then pulled out a weapon and opened fire on an officer, the Pasadena Police Department told KHOU.

A shootout took place and the suspect was ultimately shot by the officer and died from his wound.

NEW VIDEO: We're getting a look from dash and body cameras of a traffic stop that led to a Pasadena police officer returning fire at a driver | Watch the video here: https://t.co/cqKphCDOqK pic.twitter.com/9zEwMgFPu5

Josh Bruegger, the city’s assistant police chief, told reporters that the officer fired off six rounds while it was unclear whether the suspect fired any, reported The Houston Chronicle. However, in the body camera footage, it appears the suspect did fire at least once.

The footage from the officer shows the scene and was released by the department later on Thursday.

“Once the suspect vehicle and police vehicle came to a stop, the suspect opened the door, was very animated with his hands before he stood up, placed his right hand behind his back,” Bruegger said, reported CW 39. “The officer gave him verbal commands, at which time, the suspect drew a weapon, pointed at the officer.”

“It appears justified to me,” Bruegger told reporters. “When the suspect points a weapon at the officer, the officer has no choice but to defend himself.”

The identity of the man hasn’t been released as of yet.

The officer, who was not hurt, has also not been identified.

Bruegger said that the officer is “obviously shaken up.” The department has placed the officer on at least three days of administrative leave, which is standard department policy.

Bruegger described the officer as a veteran of the force who has served for 13 years and is currently 40 years old.