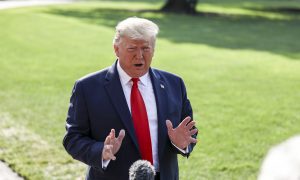 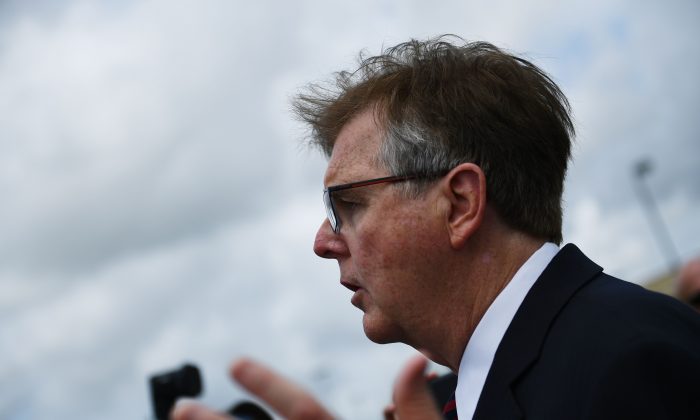 Texas Lieutenant Governor Dan Patrick speaks to the press on the grounds of Santa Fe High School in Santa Fe, Texas, on May, 20, 2018. (Brendan Smialowski/AFP/Getty Images)
US News

The Lieutenant Governor of Texas told the Dallas Morning News he wants to press for tighter background checks to include the purchase of firearms in private sales between individuals.

Lt. Gov. Dan Patrick, who presides over the state Senate, said he was prepared to break ranks with the National Rifle Association (NRA) to close what he called the “gap of stranger to stranger” purchases that bypass the checks.

“Look, I’m a solid NRA guy,” he told the newspaper, “but not expanding the background check to eliminate the stranger to stranger sale makes no sense to me.”

Private firearms sales are not subject to a background check in Texas, with only licensed dealers required to vet buyers through a federal database as per federal law.

“When I talk to gun owners, NRA members, and voters, people don’t understand why we allow strangers to sell guns to total strangers when they have no idea if the person they’re selling the gun to could be a felon, could be someone who’s getting a gun to go commit a crime or could be a potential mass shooter or someone who has serious mental issues.”

He said that he would exclude transfers among family members and friends from triggering a check.

In a metaphorical twist not lost on some critics, he said that he was willing to “take an arrow” from the NRA.

The NRA fired back in a statement, calling the proposals “political gambits” made without full possession of the facts.

The NRA said such measures would “resurrect the same broken, Bloomberg-funded failures that were attempted under the Obama administration.”

“Instead of trampling the freedom of law-abiding Americans, the government should focus upon actual solutions: fixing our broken mental health system, prosecuting known criminals, and enforcing the existing gun laws that require follow-up whenever a prohibited person tries to buy a firearm.”

Patrick told the Morning News that gun store owners told him they’d be happy to arrange for private sellers for them to meet prospective buyers at their stores, where they could run their details through the National Instant Background Check System.

On Aug. 5, he wrote on Twitter: “We cannot let those killed in El Paso, Texas, and Dayton, Ohio, die in vain. Likewise for those so seriously wounded … Republicans and Democrats must come together and get strong background checks.”

We cannot let those killed in El Paso, Texas, and Dayton, Ohio, die in vain. Likewise for those so seriously wounded. We can never forget them, and those many who came before them. Republicans and Democrats must come together and get strong background checks, perhaps marrying….

Many members of Congress believe the problem of mass shootings can be addressed to some degree through passing legislation, but are broadly split along partisan lines as to where the problem and the solution lies.

Trump has also emphasized that the focus of gun control should be on mental health.

“We must make sure that those judged to pose a grave risk to public safety do not have access to firearms; and that if they do, those firearms can be taken through rapid due process,” the president said in a White House statement.

Private sales that do not undergo background checks are sometimes referred to as a “gun show loophole,” which some experts warn is a potentially misleading misnomer.

“What is called the gun-show loophole is misnamed,” UCLA law professor Adam Winkler said, according to Politifact. “It should be the ‘private sale loophole’ or the ‘background check loophole.’ … The reason people talk about gun shows is that they are easily accessible marketplaces for people who don’t want to be subject to a background check to find non-licensed gun sellers.”

The NRA says there is no “gun show loophole,” pointing out that “Federal law is the same, regardless of where a firearm sale takes place.”

By the same token, there is no such thing as the “online sales” loophole, according to the NRA. “Federal law prohibits anyone— licensed firearm dealer or not—from shipping a firearm to a person who lives in another state, unless that person is also a dealer. Dealers must document all firearms they receive.”

Masooma Haq contributed to this article.