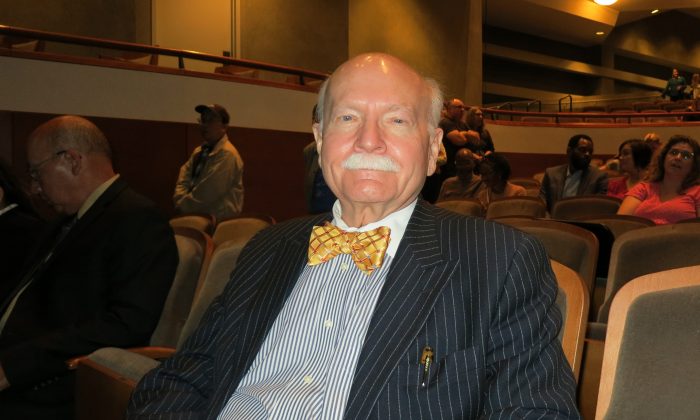 AUSTIN, Texas—The first time Judge Bill Stubblefield experienced Shen Yun Performing Arts he became intrigued by what the performance was trying to get across. There were stories about heroes who fought against villains, heavenly maidens who glided across the stage, and contemporary people being persecuted for their beliefs. He wanted to understand more about China and what this company was doing.

So several years later, he decided to come back for a second time when the performance was playing at The Long Center for Performing Arts in Austin on Jan. 5.

Stubblefield, who served as the presiding judge of the Third Administrative Judicial Region, said this time he decided to he pay closer attention to each piece. As a result, he said he was able to “[get] out more of this performance than the last one.”

“I’m so delighted that I can be here. It’s very special,” he said.

So what did he get out of this performance?

“They’re telling stories and they’re fascinating stories,” Stubblefield said. While reflecting on the story dance, “Goodness in the Face of Evil,” the judge said that people “should be able to practice their religion freely.” That piece is about a girl who lost her eyesight after being tortured for her faith in China.

He added that people “should leave one of another’s moral choices to the individual” and not have the government dictate what people should and should not believe in.

“In the United States [and] in particular in Texas, we’re very strong and on the importance of individuality. The idea of the collective being more important than the individual is very foreign to us,” Stubblefield said.

New York-based Shen Yun Performing Arts was started in 2006 by a group of artists who had the wish to paint a true picture of China and revive the nation’s 5,000 years of semi-divine culture that was systematically destroyed by six decades of communist rule.

Since then, Shen Yun expanded from one company to six equal-sized companies that tour the globe, and performs in over 100 cities annually. Their aim is to share the beautiful aspects of this culture as well as display its inner spiritual core—which encompasses the virtues of benevolence, kindness, and honor.

These stories portray themes like spiritual devotion, the benevolence of gods, good and evil retribution, and the search for the meaning of life, according to the company’s website. Such values are foundational to traditional Chinese culture and are not political in nature.

Shen Yun performers have to learn to embody traditional principles by cultivating their characters and self-improvement. Thus, many of the performers practice Falun Gong.

One Falun Dafa-related dance stories was the piece “Goodness in the Face of Evil” in this year’s program.

Stubblefield said he also understands how communism can be detrimental to human society and finds it unfortunate that as humans we have “to struggle to make a better world.”

“I think bad ideas are as dangerous as bad viruses,” he said. “And communism is a bad idea.”

“The way it was devolved in Russia with Leon Trotsky and based on the teaching of Marx … resulted in the death of tens of millions and frankly hundreds of millions of human lives,” he added.

Along with understanding the themes and context of the stories portrayed in Shen Yun, Stubblefield said he found the overall caliber of the performance was impressive.

Shen Yun’s backdrops, which are patented, are unique as they’re like magical windows that infinitely extend and transform the stage. The company’s designers have created vivid animated settings that truly reflect China’s multifaceted geography, society, regions, and dynasties, as well as heavenly realms, according to Shen Yun’s website.

Stubblefield agrees. He said, “I think it’s certainly realistic but I think the colors are heightened in the costumes, as well of the graphics, and I think it makes a magical world.”