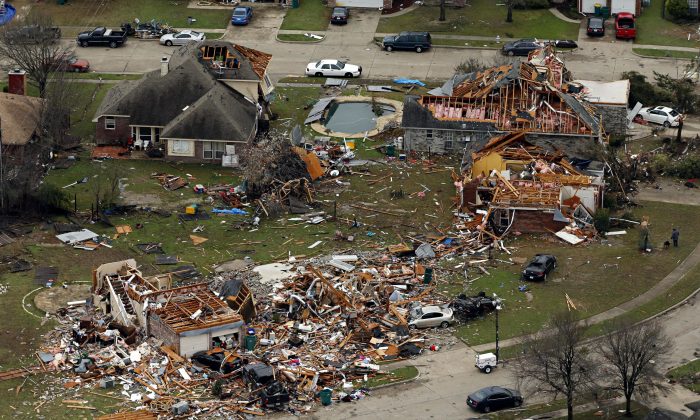 This aerial photo shows damage after a tornado ripped through the area in Glenn Heights, Texas, on Dec. 28, 2015. Residents surveyed the destruction from deadly tornadoes in North Texas as the same storm system brought winter woes to the Midwest on Monday, amplifying flooding that's blamed for more than a dozen deaths and prompting hundreds of flight cancellations. At least 11 people died and dozens were injured in the tornadoes that swept through the Dallas area Saturday and caused substantial damage. (G.J. McCarthy/The Dallas Morning News via AP)
US

Texas Cleans Up After Twisters, Snow and Ice Pelt Midwest

GARLAND, Texas—Jacqui Gordon spent Monday sifting through the debris that had been her home, searching for old family photographs—especially of her father, who died two years ago.

She and nine others were enjoying a holiday gathering when winds began to rattle her home in suburban Dallas. They all dashed into closets and suffered only bumps and bruises, but Gordon’s roof was torn away and her house destroyed.

“I just got divorced, and this is all I had,” she said.

With rain all day Sunday keeping people away, residents worked on a dreary and frigid Monday to salvage what they could, with the American Red Cross distributing items like tarps, rakes and work gloves to help them.

At least 11 people died and dozens were injured in the tornadoes that swept through the Dallas area Saturday. Snow from New Mexico through the Midwest, plus flooding in Arkansas, Missouri and Illinois, added to the succession of severe weather events across the country in the last week that led to about four dozen deaths.

The storm system brought heavy snow, ice and blustery winds to several states in the nation’s midsection, as well as heavy rain in already-waterlogged areas.

More than 2,100 flights across the U.S. were canceled Monday—more than half of them at Chicago’s two main airports—and 3,700 were delayed, according to flight-tracking service FlightAware. A typical day sees about 150 cancellations and 4,000 delays.

Highways turned icy and treacherous in New Mexico, while Oklahoma Gov. Mary Fallin declared a state of emergency after blizzard conditions affected parts of the state and heavy rains fell.

The Oklahoma Highway Patrol said the body of a 22-year-old man was recovered but a second man, the lead singer of the country-rock band Backroad Anthem, was still missing after the two went duck hunting and their boat capsized.

Officials in Arkansas said a 31-year-old man died in a storm-related drowning.

Several inches of rain caused flooding in Illinois and Missouri, where Gov. Jay Nixon also declared a state of emergency. Nixon says the state’s death toll from days of pounding rainfall has risen to 10, and he expects that number to grow.

The Mississippi River neared a potential record crest, after an unusual amount of late-fall rain had the river already high before torrential downpours that began Saturday.

Mississippi Gov. Phil Bryant said Monday the state is seeking a federal disaster declaration for some or all of the seven counties hit by a tornado last week. Authorities in Georgia said they recovered the body of a man whose car was swept away when floodwaters overtook it.

Texas Gov. Greg Abbott made disaster declarations Sunday for four counties—Dallas, Collin, Rockwall and Ellis. Officials estimated as many as 1,450 homes in North Texas were damaged or destroyed by at least nine tornadoes.

The National Weather Service has said an EF-4 tornado, which is the second-most powerful with winds up to more than 200 mph, hit Garland. Eight people died there, 15 were injured and more than 600 structures, mostly single-family homes, were damaged.

“I’ve never seen anything like this, with this scale of destruction,” Police Chief Mitch Bates said Monday.

He said authorities believe all eight of the tornado victims there, which included a 1-year-old, died when their vehicles were thrown from overpasses in the area of Interstate 30 and the George Bush Turnpike, a major route in the region.

North of Dallas in Collin County, neighbors and emergency responders had tried to save a tiny victim of the powerful storms.

Debralee King said she was in her yard assessing the damage when she heard a neighbor’s scream and saw Jose Daniel Santillano appear with his newborn daughter. She said Santillano asked her to take the girl to the hospital, and she headed out with another neighbor.

King and local authorities say they found a game warden who performed CPR until an ambulance arrived—but the infant didn’t survive.

Both the husband and wife were hospitalized Monday. The family’s trailer was blown off its base.

“It’s bad enough that the tornado took their home,” King said. “But to take the baby, too, that’s wrong.”

Many roads across West Texas and the Panhandle were still closed due to snow-packed roads and ice, with long delays expected.

Interstate 40, the main east-west highway across the Panhandle, reopened Monday morning. After a standstill of several hours, traffic began moving slowly where Interstate 10 splits into Interstate 20 in West Texas.

Vito Randazzo of California said he sat on I-10 for about 13 hours and people were sleeping in their cars. Around 9 a.m. Monday he was able to see to drive across a median and get onto a service road.

A shopping mall in Lubbock, which got about a foot of snow, was closed after heavy snow collapsed part of the center’s roof. No injuries were reported.