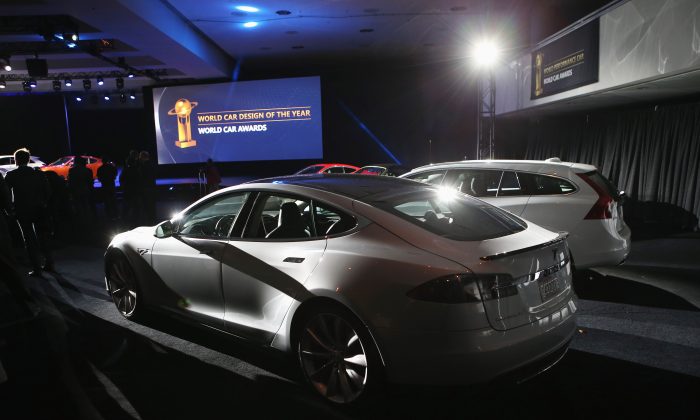 A Tesla Model S is displayed after winning the 2013 World Green Car of the Year award at the New York Auto Show on March 28, 2013 in New York City. It was chosen from an original entry list of 21 vehicles from all over the world. (Photo by John Moore/Getty Images)
Autos

Tesla Review: ‘Outscores Every Other Car’

Tesla review: A review by Consumer Reports says the Tesla Model S “outscores every other car in our test ratings.”

“It does so even though it’s an electric car. In fact, it does so because it is electric,” the review adds.

The Tesla gets about 265 miles with the biggest battery available, per charge, according to another review. It’s Model S came out in late 2012.

The Consumer Reports review raves about the car, including:

-“Inside, the car looks like something Marty McFly might have brought “back from the future” in place of his iconic fusion-powered DeLorean,” including a “giant 17-inch touch screen.”

-“The Model S uses about half the energy of a Toyota Prius every mile, and it has more than twice the range—about 200 miles—of any other electric car we’ve driven.”

-The car’s battery, being mounted under the floor, “gives the car a rock-bottom center of gravity that enables excellent handling, a comfortable ride, and lots of room inside.”

All in all, the Tesla, at a premium of nearly $90,000, could be the best car ever. “But for many people, the very thing that makes cars great is the ability to jump in and drive wherever you want on the map at a moment’s notice,” says the review. “And on that measure the Tesla has its limitations. So the Model S may not satisfy every conceivable need, but as we’ve learned through our testing and living with it, the Model S is truly a remarkable car.”