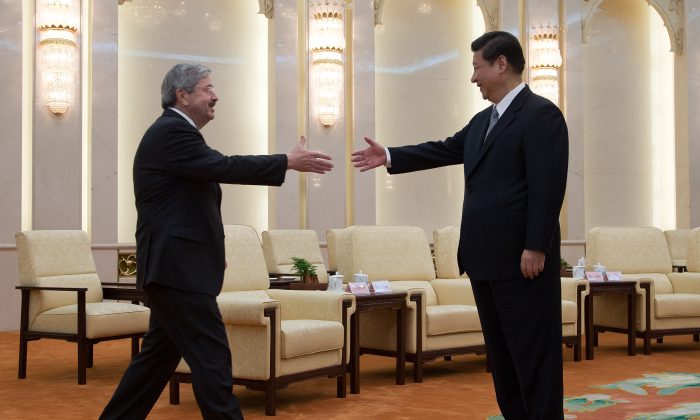 Terry Branstad, Incoming US Ambassador to China: ‘We Face Many of the Same Challenges’

New U.S. ambassador to China Terry Branstad, recently confirmed for his post and soon to move to Beijing, has said that he intends to make a priority of stopping the North Korean nuclear threat and resolving the Sino-American trade imbalance.

In a short greeting video posted to Chinese social media on June 26, the former Iowa governor said that “resolving the bilateral trade imbalance, stopping the North Korea threat, and expanding people-to-people ties will be my top priorities.”

Branstad, who served 22 years as Iowa governor until resigning on May 24 to take up his new job, has kept in touch with Xi Jinping for three decades, since their first meeting in the 1980s.

“More than three decades and five more visits to China later, I now look forward to working with you, the people of China, to build the future of US-China ties. Jobs, education, an aging population and health care, we face many of the same challenges.  A strong relationship can contribute to solutions,” Branstad said.

Branstad first met with Xi in 1985, when Xi visited Iowa as part of an official exchange program. Xi, then in his thirties, was a minor agricultural official in the northern Chinese municipality of Shijiazhuang.

U.S. President Donald Trump picked Branstad for the position of ambassador last December, noting his personal connections with the Chinese leader and the importance of the Sino-American relationship.

President Trump has stressed his fruitful and candid talks with Xi Jinping as he tries to enlist Chinese assistance in reining in North Korea’s nuclear and missile program, which threatens the U.S. and its allies, as well as China.

On June 20, China’s apparent slowness to take decisive action prompted Trump to send out a tweet saying that Xi had tried, but failed to help the U.S. on the North Korea crisis. But the next day, American Secretary of State Rex Tillerson and Defense Minister James Mattis held a cordial security dialogue with their Chinese counterparts Yang Jiechi and Gen. Fang Fenghui.

Branstad’s video continues the friendly, if not yet concrete, diplomacy between the Xi and Trump administrations. “We face many of the same challenges. A strong U.S.-China relationship can contribute to solutions,” Branstad said in his video.

“I also want to travel across China, visiting old friends and making news ones, my wife, daughter, sons-in-law, and two granddaughters will join me in Beijing, and I look forward to introducing them to the warmth and extraordinary culture of the Chinese people,” Branstad said.