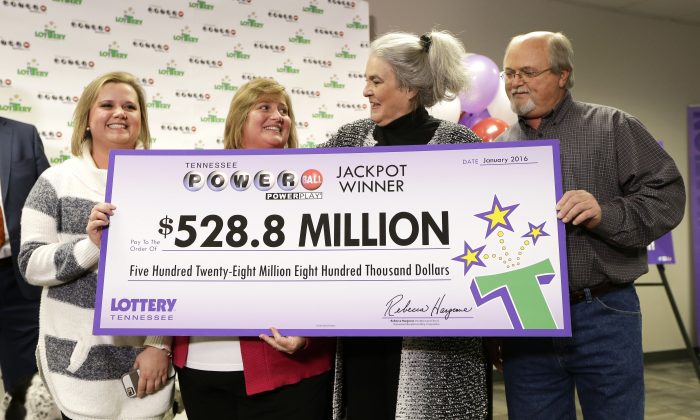 Rebecca Hargrove, second from right, president and CEO of the Tennessee Lottery, presents a ceremonial check to John Robinson, right; his wife, Lisa, second from left; and their daughter, Tiffany, left; after the Robinson's winning Powerball ticket was authenticated at the Tennessee Lottery headquarters Friday, Jan. 15, 2016, in Nashville, Tenn. The ticket was one of three winning tickets in the $1.6 billion jackpot drawing. (AP Photo/Mark Humphrey)
US

Tennessee Powerball Winners Know What They’re Not Going to Buy

Their daughter, however, wants a horse.

After appearing on national television, John Robinson and wife Lisa went to the Tennessee lottery headquarters in Nashville on Friday to have their winning ticket verified by lottery officials. The couple’s lump sum payout is about $327 million after buying the ticket for Wednesday night’s drawing at a grocery store in their west Tennessee hometown of Munford, population 6,000. Two other winning tickets were bought in California and Florida.

At a news conference Friday, the Robinsons said they won’t stop working and won’t make any wild purchases. They’ll pay off their mortgage and their daughter’s student loans, but have no desire to move from their gray, one-story house in a close-knit community into a luxurious compound somewhere.

Lisa works at a dermatologist’s office. John is a warehouse supervisor. Both plan to return to work Monday, they said. Friends and neighbors say the Robinsons are a hard-working, responsible family with the ability to humbly deal with their new fortune.

“That’s what we’ve done all our lives, is work,” John Robinson said. “You just can’t sit down and lay down and not do nothing anymore. Because how long are you going to last? We do want to enjoy a little bit of our earnings, and maybe invest a little bit of it so our son and daughter will have it and they’ll never need anything again.”

No one has produced the other winning tickets, which overcame odds of 1 in 292.2 million to land on all six numbers at a Publix supermarket in Melbourne Beach, Florida, and a 7-Eleven in Chino Hills, California.

In California, any winnings not claimed within a year automatically go to the state’s schools. Florida gives winners six months to come forward before transferring 80 percent of unclaimed prizes to an educational trust fund, and 20 percent into a pool for future lottery prizes.

Robinson said he reached out to his brother for help finding lawyers and financial planners before deciding to take the winnings in a single lump sum of nearly $328 million, rather than let the lottery invest the prize and pay him 30 annual installments totaling an estimated $533 million.

Why pass up on a certain income totaling more than $200 million?

“We’re going to take the lump sum, because we’re not guaranteed tomorrow,” Robinson said. “We just wanted a little piece of the pie. Now we’re real grateful we got the big piece of the pie.”

The Robinsons said they have no plans to leave Munford, the town about 25 miles north of Memphis where they both went to high school.

Tennessee Lottery executive Rebecca Hargrove said the couple would get a “small check today for a few million,” and collect the full lump sum in about 10 business days.

Robinson said earlier Friday that they would help certain friends, give to the St. Jude Children’s Research Hospital in Memphis, and donate to their church.

“I’m a firm believer in tithing to my church,” Robinson said in an appearance on NBC’s “Today” show.

The couple has a son, Adam, who works as an electrician, and a daughter, Tiffany, who lives nearby in her late grandparents’ home.

“My first thought was, I’ve always wanted a horse,” she said. “I get a horse now. My dad always said, “When I win the lottery.'”

Robinson carried the precious slip of paper to New York City and back before showing up at Tennessee’s lottery headquarters. Their lawyer went with the family, as did their rescue dog, Abby, who snoozed through most of the excitement.

Lawyers who have represented other winners advise against going public until they have made plans with experts in tax law, financial planning, privacy, security and other safeguards to protect themselves and their winnings.

Munford’s mayor, Dwayne Cole, had wished openly Thursday for an investment in the town, whose annual budget is $3.67 million. He said Munford’s needs include fire department equipment, an indoor athletic facility for local schools and a community gymnasium.

On Friday, Cole told the AP that they are not the kind to squander their money.

He did, four times, then thought: “Well, I’ll believe it when the news comes on in the morning.”

As for buying a bigger, more resplendent house, it appears to come down to practicality for John Robinson.