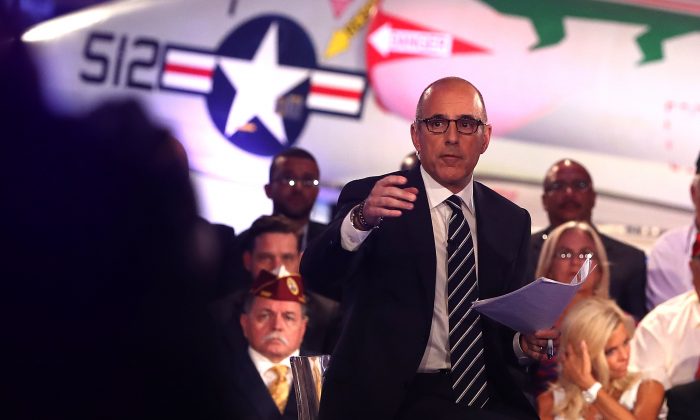 The candidates discussed military affairs, veterans issues, and their qualifications to be commander in chief at the event hosted by NBC News with the Iraq and Afghanistan Veterans of America at the Intrepid Sea, Air & Space Museum. The moderator was Matt Lauer of the “Today Show.”

Clinton spent the first part of her appearance on defense when asked about her judgement in the light of her use of a private email server. The former secretary of state said that the use of the server was “a mistake” and that she would “certainly not do it again.”

Clinton then defended her use of classified information saying she had years of experience in handling sensitive material.

“Classified material has a header which says, “Top Secret,” “Secret,” “Confidential.” Nothing—and I will repeat this, and this is verified in the reports by the Department of Justice—none of the emails sent or received by me had such a header,” said Clinton.

FBI Director James Comey said in a congressional hearing in July that the agency’s investigation into Clinton’s use of a private email server found 110 emails that contained classified information. In a summary of its investigation released last Friday the FBI said that Clinton told agents that she did not know the marking “(C)” labeled messages contained confidential information.

In the first question from the audience, a former naval flight officer, who held a top-secret sensitive compartmentalized information clearance, told Clinton that he would have been prosecuted and imprisoned if he had mishandled classified information like her.

“How can you expect those such as myself who were and are trusted with America’s most sensitive information to have any confidence in your leadership as president when you clearly corrupted our national security?” asked veteran John Lester.

“I communicated about classified material on a wholly separate system,” said Clinton. “I did exactly what I should have done and I take it very seriously. Always have. Always will,” she added.

War in Iraq a “Mistake”

Clinton said at the forum that her 2003 vote in favor of the Iraq War was a “mistake.”

A veteran who served in the Air Force asked Clinton about her “hawkish foreign policy.”

“I will do everything in my power to make sure that our men and women in the military are fully prepared for any challenge that they may have to face on our behalf,” said Clinton.

“But I will also be as careful as I can in making the most significant decisions any president and commander-in-chief can make about sending our men and women into harm’s way,” she added.

When it comes to those who have served in the military, Clinton said she will not let Veterans Affairs be privatized, saying it will be “very disastrous” for veterans.

The former secretary of state brought up the mental health agenda she revealed last week when asked about veteran suicides.

“I have a whole section devoted to veterans’ mental health,” she said. “And we’ve gotta remove the stigma. We’ve gotta help people currently serving not to feel that if they report their sense of unease, their depression, that somehow it’s gonna be a mark against them. We have to do more about addiction. Not only drugs but also alcohol.”

Clinton was also asked about the nuclear deal with Iran and whether Tehran was “playing us” and about her previous comments in which she said she thinks Iran will “cheat.”

“On the nuclear issue, no,” Clinton said. “I think we have enough insight into what they’re doing to be able to say we have to—distrust but verify.”

“I would rather as president be dealing with Iran on all of those issues without having to worry as much about their racing for a nuclear weapons,” she said, citing ballistic missiles, Iran’s role in Syria, and others.

Donald Trump defended himself against a comment made by Hillary Clinton during her time on stage that he had supported the war in Iraq, before opposing it.

In the interview at the time Trump said: “I would never have handled it that way. Does anybody really believe that Iraq is going to be a wonderful democracy where people are going to run down to the voting box and gently put in their ballot and the winner is happily going to step up to lead the country?”

However, when asked about whether he supported the invasion in Iraq in a 2002 radio interview with Howard Stern Trump hesitantly said: “Yeah, I guess so. I wish the first time it was done correctly.”

At a rally in Cleveland, Ohio, the day after the debate Trump said that Stern was the first person who had asked him about his position and that he subsequently changed it.

Trump was asked by a veteran whether “an undocumented person who serves—who wants to serve in the U.S. armed forces deserves to stay in this country legally?”

“I think that when you serve the armed forces, that’s a very special situation and I could see myself working that out, absolutely,” Trump, who has proposed a strict immigration plan, responded.

“Now, we have to be very careful. We have to vet very carefully. Everybody would agree with that. But the answer is it would be a very special circumstance, yes,” Trump said.

Trump was asked about previous remarks  he made in which he said he knew “more about ISIS than the generals do.”

Trump said that the United States should have taken over Iraq’s oil following the removal of Saddam Hussein.

“If we would’ve taken the oil, you wouldn’t have ISIS. Because ISIS formed with the power and the wealth of that oil,” said the GOP nominee.

In the discussion, Trump was questioned by Lauer about whether or not he has a plan to defeat ISIS, and if so what it is exactly.

“You have your own plan?” asked Lauer.

“I have a plan,” said Trump, adding, “If I win, I don’t wanna broadcast to the enemy exactly what my plan is.”

Trump: ISIS would not have formed “if we would’ve taken the oil”#NBCNewsForum
Watch live: https://t.co/r5knQOlmKe https://t.co/JvcKUKRR3k

When asked about a comment Trump had made earlier this year in which he described Putin as “highly respected within his country and beyond,” Trump pointed to the Russian president’s 82 percent approval rating.

Lauer noted that Putin was “also a guy who annexed Crimea, invaded Ukraine,” and also “supports Iran, [and] is trying to undermine our influence in key regions of the world.”

“And according to our intelligence committee, community probably is the main suspect of the hacking of the DNC computer,” said Lauer.

“Well, nobody knows that for a fact. But do you want me to start naming some of the things that President Obama does?” responded Trump.

The candidate also said that a U.S.-Russia relationship could help defeat the ISIS terrorist group.

“If we had a relationship with Russia, wouldn’t it be wonderful if we could work on it together and knock the hell out of ISIS?” said Trump.

Veterans and Sexual Assault in the Military

A veteran, who lost two friends to post-traumatic stress disorder, asked Trump about his plan to stop 20 veterans a day from killing themselves.

“Actually it’s 22,” Trump said as the veteran shook her head. The VA said in July that 20 veterans commit suicide every day.

When asked by a different veteran what he would do to support victims of sexual assault in the military, Trump said he wants to keep “the court system within the military.”

“The best thing we can do is set up a court system within the military. Right now, the court system practically doesn’t exist,” Trump said.