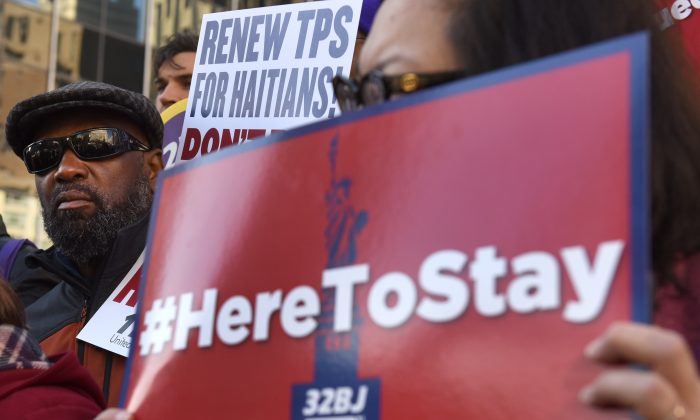 Protesters rally against the termination of the Temporary Protected Status designation for around 59,000 Haitians, in New York City on Nov. 21, 2017. (Timothy A. Clary/AFP/Getty Images)
US News

Temporary Protected Status for Haitians Set to Expire in 2019

WASHINGTON—Haitians who came to the United States after a devastating earthquake in 2010 and were granted Temporary Protected Status (TPS), are expected to return to their country by July 22, 2019.

Department of Homeland Security Acting Secretary Elaine Duke made the announcement on Nov. 20. In May, then-Secretary John Kelly extended the program for six months and suggested it could be terminated in January 2018.

Since the 2010 earthquake, the number of displaced people in Haiti has decreased by 97 percent, the DHS said in a statement.

“Significant steps have been taken to improve the stability and quality of life for Haitian citizens, and Haiti is able to safely receive traditional levels of returned citizens,” the statement said. “Haiti has also demonstrated a commitment to adequately prepare for when the country’s TPS designation is terminated.”

Almost 59,000 persons are beneficiaries under the TPS designation for Haiti, an official at the Department of Homeland Security (DHS) confirmed. In 2011, the first year of the designation, more than 55,600 Haitians were granted TPS. The status allows for work authorization and other benefits.

Of the 58,706, more than 16,000 have either filed for or have been granted lawful permanent resident status since being granted TPS.

“Upon termination, TPS beneficiaries revert back to the immigration status they had prior to receiving TPS, unless that prior status has since expired,” said Brendan Raedy, an Immigration and Customs Enforcement (ICE) spokesperson. “Those here without lawful status at that point would then be subject to ICE enforcement priorities, which focus on criminal aliens, those with final orders of removal, and those who pose a threat to public safety or national security.”

The initial period of time that TPS is granted is between six and 18 months, as determined by the attorney general. It is generally granted to nationals of countries beleaguered by war or natural disasters.

Haiti is not the only country with an outstanding TPS designation.

Sudan’s TPS designation was terminated in October and will officially expire on Nov. 2, 2018.

Earlier this month Duke announced an end to the 1999 TPS designation for Nicaragua, which will be terminated on Jan. 5, 2019. The Nicaraguan government did not make any requests to extend the current TPS status.

Duke called on Congress to enact a permanent solution for this “inherently temporary program,” while “recognizing the difficulty facing citizens of Nicaragua—and potentially citizens of other countries—who have received TPS designation for close to two decades.”

“However, given the information currently available to the Acting Secretary, it is possible that the TPS designation for Honduras will be terminated at the end of the six-month automatic extension with an appropriate delay,” the statement said.

Other countries with current TPS status for citizens in the United States include El Salvador, Nepal, South Sudan, Syria, and Yemen.