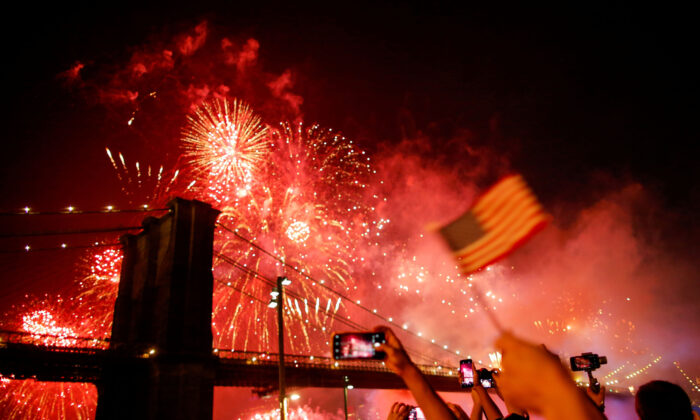 Telling the RINOS From the CHINOS for the Fourth of July

Almost all of us know what a RINO is—Republican in Name Only—the kind of Republican that votes with Democrats on key issues such as immigration and election integrity or virtue-signals by marching in support of obvious profiteers masquerading as civil rights organizations such as Black Lives Matter.

But at this patriotic time of year, it strikes me that there is something or someone even worse, to whom I give the highly imperfect acronym CHINOS.

The CH stands for China—meaning, of course, the Chinese Communist Party, not the people—and the I stands for Iran (more of that in a moment). Maybe N for North Korea, though that might be a stretch even for some CHINOS. (You could say O for open borders, but that would really be RINOS.)

What I mean by CHINOS are those who, even on the Fourth, tend to side, overtly or covertly, with China and/or assume China will prevail in the global struggle and go along with its interests, almost always for reasons of greed but occasionally for reasons of ideology.

Now, not all RINOS are CHINOS, nor are all CHINOS RINOS—that would be impossible since the vast majority of Democrats are CHINOS to begin with.

As the New York Post just now once again reminds us, Hunter Biden is a prime example of a Democrat CHINO. His father might even be called CHINO-in-chief, since, as many recall, just before he threw his hat in the presidential ring and had to reverse himself, Joe Biden blithely told his fellow Americans “China’s not our enemy,” ignoring every human rights atrocity of the communist regime from genocidal labor camps to forced organ transplants, not to mention China’s imperialistic actions across the world, in favor of his family business.

But what about Republicans? How do we tell the RINOS from the CHINOS?

Of course, many overlap, such as Senate Minority Leader Mitch McConnell (R-Ky.), but indeed some aren’t both. An example is Sen. Bill Cassidy of Louisiana, who was in that tiny minority of Republican senators to vote to convict Trump in the second impeachment trial. The Republican Party of his state, unsurprisingly, wasn’t amused and censured him. He’s definitely a RINO, but still not a CHINO, not completely anyway.

How do I know this? In May, Sen. Marsha Blackburn (R-Tenn.) introduced the Iran China Accountability Act (S.4290), whose summary at Congress.gov reads:

“This bill prohibits the use of funds to enter into any negotiation with Iran regarding an Iran nuclear agreement until the President makes specified certifications concerning the actions of China and Iran.

“Further, any Iran nuclear agreement that the United States enters into must certify the destruction of any and all Iranian nuclear and missile capabilities, weapons, infrastructure, chemical weapons, and offensive cyber activity. Such agreement shall be deemed a treaty requiring advice and consent of the Senate.”

Blackburn gave the following statement to The Epoch Times regarding her proposal:

“The Obama-Biden Iran Deal has always been a failure. The Biden administration should not re-enter a deal that legitimizes the Iranian regime—especially while they continue to fund terrorism, endorse Communist China’s dangerous government, and facilitate genocide. This legislation will stop taxpayer dollars from enabling the Biden White House to back this corrupt regime.”

Kudos to Blackburn, although such legislation is largely symbolic at this point, as I’m sure the senator knows. It would never be signed into law by the current administration.

Nevertheless, you would think most, if not at all, Republicans would sign on in support.

Many were—and I guess still are—missing from the list. Does that mean they are CHINOS, secret or otherwise? It’s hard to say, but we should all keep our eyes and ears open. What harm would it have been to sign to support such a bill, symbolic though it may be? (Most of what Republicans propose in the Senate has to be symbolic until the election.)

As for Cassidy, his not being a CHINO, or at least pretending he’s not, doesn’t nearly ameliorate his ridiculous and pompous stand on impeachment—at least for me. I wouldn’t dream of voting for him were I a citizen of his state.

But significantly, for the Fourth of July, if you’re a patriot, understanding, actually discerning, who is or isn’t a CHINO is important information to both know and act upon. Our futures depend on it, just as much as knowing who is or isn’t a RINO, possibly more.

We should bear in mind and follow this paraphrased advice from the greatest writer of all time (initials WS), “Neither a RINO, nor a CHINO be.” (I couldn’t find a good paraphrase for “For loan oft loses both itself and friend.” But that’s also true.)

And, speaking of CHINOS, we shouldn’t forget as we stare up at the night sky on the Fourth, watching the red, white, and blue display, the Stars and the Stripes in full glory unfolding above us that, as we have known for years, our most patriotic fireworks are usually Made in China.

Enough already. Blackburn is on the right track.