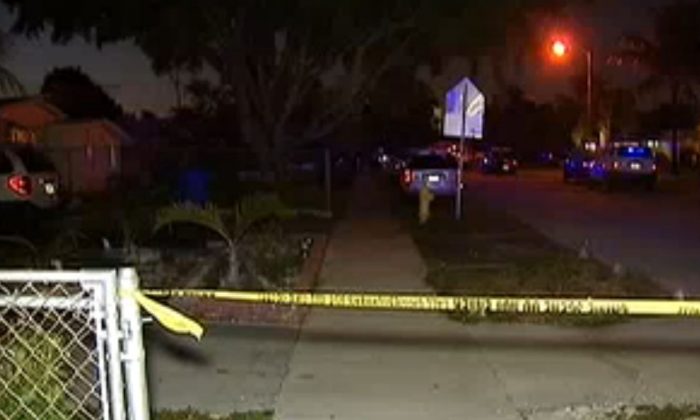 An NBC Miami screenshot shows the neighborhood in Oakland Park where the girl was shot.
US

A teen has shot his 6-year-old sister with a handgun in South Florida, leaving her wounded in the hospital, according to reports.

The 13-year-old, who was not identified, shot the small child Saturday night in Oakland Park, reported WFOR-TV. The two were home alone.

Neighbors said they heard a gunshot, and saw the small girl being taking out by paramedics.

“They didn’t use a stretcher,” neighbor Justin Latourrette told the station. “They carried her straight out in their arms and you could tell she had a hole in her chest above her heart. She had her eyes open, you could tell she was in shock.”

The teen told investigators how the gun that he found discharged and shot his sister, reported the Miami Herald. He reportedly drew a picture of what happened, showing it to authorities.

“The little boy just sat there rocking back and forth,” a neighbor told the paper. “It’s just so devastating. They had just moved in two weeks ago.”

Peter Milano, another neighbor, told WTVJ-TV that the two were playing hide-and-seek when the gunshot was heard. He also said he saw a relative of the children running after the shot.

“She came up to me, ‘Is she ok? Is she ok?’ At the time, I didn’t know what she was talking about,” Milano was quoted as saying.

Investigators are looking into how the teenager got the gun.

“She seems like a fighter,” Moschella told the Herald.

The Herald points out that under Florida law, the gun should have been placed in a safe place. A loaded firearm that is kept within the reach of a minor is a third-degree felony.

“The problem is children have a fascination with firearms…when they see a firearm they see it on TV and in movies and a lot of times they have toy guns, so when they find a gun they want to see what happens. People tend not to be as cautious as they should be and tragedies happen,” Jon Gutmacher, a gun law expert who also works with the NRA, told the paper.

The Children’s Defense Fund estimates that one-third of all U.S. households with a child under the age of 18 have a firearm, according to the Huffington Post. The group also reported that 22 percent of children said they handled a firearm in gun-owning homes without their parents’ knowledge.