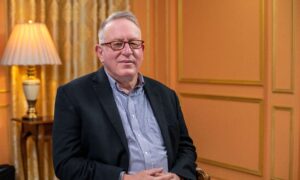 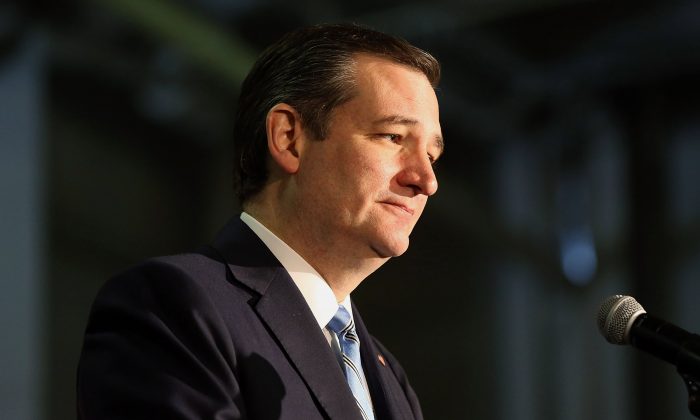 Republican presidential candidate Ted Cruz gives a speech on international security and expanding the U.S. military on board of the USS Yorktown in Mt. Pleasant, S.C., on Feb. 16, 2016. Cruz, one of the more conservative candidates running for president, criticized the Obama administration for shrinking the military and for not being aggressive enough on the international stage. (Spencer Platt/Getty Images)
Politics

Ted Cruz May Be First Hispanic President, but Rejects the Label

COLUMBIA, South Carolina—After his big win in the Iowa caucuses, Ted Cruz is one step closer to becoming the first Hispanic president in U.S. history. But that’s not how he wants to be known.

Cruz, whose father was born in Cuba, admits that his Spanish-speaking skills are “lousy.” He offers up only the occasional “muchisimas gracias” on the campaign trail.

His positions on immigration, including ending birthright citizenship and building a border wall, put him at odds with many Hispanic voters and advocacy groups. They accuse him of ignoring his heritage and issues that matter to many Latinos.

Florida Sen. Marco Rubio shares some of the same conservative positions on immigration, some of which antagonize the Hispanic community—an ever-growing and increasingly powerful demographic in American elections.

For both of the young senators, their heritage has not defined their supporter base or their political philosophies. But Cruz in particular has risked alienating many Hispanics by surrounding himself with conservatives such as Iowa Rep. Steve King, Cruz’s national campaign co-chairman, who has compared immigrants living in the country illegally to drug mules and livestock.

In appealing to conservatives in mostly white Iowa and New Hampshire, it wasn’t necessary for Cruz or Rubio to appeal directly to Hispanic voters. But that could change quickly in Nevada on Feb. 23, where Latinos make up 28 percent of the population, although they made up only 5 percent of Republican voters in the 2012 caucuses.

Cruz’s top strategist, Jason Johnson, says the Texas senator can win the general election by capturing just 30 percent of Hispanics—not much more than the 27 percent Mitt Romney got in his failed 2012 White House bid. Instead of luring more Hispanics to his side, Cruz is counting on bringing out millions of mostly white evangelical Christians and working class voters who sat out the past two elections.

“In the Democratic Party, you’re the Hispanic guy, you’re the African-American guy, you’re whatever your little bloc is, you’re pigeonholed and simply a quota representative,” Cruz told The Associated Press in a November interview. “One of the reasons I’m a Republican is because we treat people as individuals. … When I ran for Senate in Texas I didn’t run as: ‘Vote for the Hispanic guy.'”

One of the reasons I’m a Republican is because we treat people as individuals. … When I ran for Senate in Texas I didn’t run as: ‘Vote for the Hispanic guy.’
— Ted Cruz, Republican presidential candidate

Cruz said he ran for the Senate as the strongest conservative and “that’s exactly how I’m running for president.”

As a teenager in Cuba, his father Rafael Cruz joined an uprising against Cuban dictator Fulgencio Batista, during which time he was arrested and beaten. In 1957—two years before Fidel Castro took power—the elder Cruz fled Cuba for the U.S., a story that Cruz often recounts on the campaign trail.

He told AP that nothing sums up why he ran for office more than his father’s journey and fulfillment of the American dream.

“Being the son of an immigrant who has fled oppression makes you appreciate how precious and fragile our freedom is, and is integral to who I am,” Cruz said. “But I think a great many of Hispanics in this country are tired of being stereotyped or taken for granted by the Democratic Party.”

Cruz was born Rafael Edward Cruz in 1970. He spoke no Spanish at home and his parents spoke only English when around him.

Cruz described in his 2015 autobiography “A Time for Truth” how as a child he was known by the nickname Felito.

“The problem with that name was that it seemed to rhyme with every major corn chip on the market,” Cruz wrote. “Fritos, Cheetos, Doritos and Tostitos—a fact that other young children were quite happy to point out.”

Cruz changed his name to Ted when he was 13—a move that infuriated his father. For about two years, his father, who now travels the country campaigning for him, refused to call him Ted.

By distancing himself from his cultural heritage, he’s opening himself to criticism from the other Cuban-American in the race. Rubio and Cruz clashed over their Spanish-speaking skills in last weekend’s GOP debate, with the fluent Rubio criticizing Cruz for not speaking Spanish. Cruz lashed back in heavily accented Spanish, a rare display of his limited knowledge of the language.

Alfonso Aguilar, president of the Latino Partnership for Conservative Principles, said Cruz “doesn’t fundamentally understand the Latino community.” The Washington-based group of national conservative and Republican leaders has criticized both Cruz and Donald Trump for their opposition to legalizing people who are in the county illegally.

Cruz and Rubio “have turned their back on our community” and are catering to the anti-immigrant fringe of the Republican Party, said Dolores Huerta, a longtime civil rights activist.

“They really don’t share the values of the Latino community even though they happen to be Latinos themselves,” Huerta said. “We have to vote our values and for the people who are standing up for us. … We can’t vote for somebody just because they happen to be of Latino descent.”