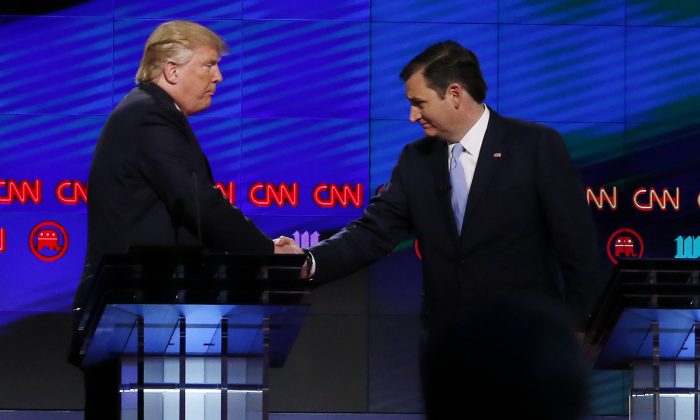 “After many months of careful consideration, of prayer and searching my own conscience, I have decided that on Election Day, I will vote for the Republican nominee, Donald Trump,” Cruz declared in a Facebook post.

Trump and Cruz clashed throughout the primaries. Trump called Cruz “Lyin’ Ted,” personally attacked his wife, and floated rumors that his Cuban-born father was involved in John F. Kennedy’s assassination.

Towards the end of his campaign Cruz called the nominee a “pathological liar” and snubbed the candidate at the Republican National Convention in July, saying that voters should vote with their “conscience,” a comment that was booed by the attendees at the convention.

“In Cleveland, I urged voters, ‘please, don’t stay home in November. Stand, and speak, and vote your conscience, vote for candidates up and down the ticket whom you trust to defend our freedom and to be faithful to the Constitution.'”

According to the post, Cruz’s conscience has shifted to supporting Trump in the election for two reasons.

The first reason being that he signed a pledge during the primaries to support the Republican—a comment indirectly targeting Ohio Governor John Kasich and former Florida Governor Jeb Bush who have yet to endorse the Republican nominee despite taking the pledge.

The second reason is Hillary Clinton. He gave six policy positions to support his rejection of Clinton, which Cruz capped with the hashtag “#NeverHillary,” and why he was embracing his former rival.

“First, and most important, the Supreme Court,” he started. “We are only one justice away from losing our most basic rights, and the next president will appoint as many as four new justices.”

The second point that Cruz made was Obamacare. “If Republicans hold Congress, leadership has committed to passing legislation repealing Obamacare. Clinton, we know beyond a shadow of doubt, would veto that legislation. Trump has said he would sign it.”

Other positions that Cruz pointed to are energy, immigration, and national security, all critical of Obama’s positions, suggesting that Clinton would continue Obama’s policies. The last position, and a policy that Cruz has advocated strongly for recently, is the defense of internet freedom.

“Clinton supports Obama’s plan to hand over control of the Internet to an international community of stakeholders, including Russia, China, and Iran,” Cruz wrote. “Just this week, Trump came out strongly against that plan, and in support of free speech online.”

Recently Cruz tweeted his thanks to Trump for supporting Cruz’s concern: “Appreciate @realDonaldTrump‘s support of our efforts to keep the internet free,” he tweeted, linking to a statement made by the Trump campaign in support of the legislation.

Appreciate @realDonaldTrump‘s support of our efforts to keep the internet free: https://t.co/gc4aRustpx

In the last few months, Trump has hired some of Cruz’s former employees, including Kellyanne Conway as Campaign Manager and Jason Miller as communications director. Trump accepted the endorsement shortly after it was posted to Facebook.

“I am greatly honored by the endorsement of Senator Cruz,” Trump said in a statement. “We have fought the battle and he was a tough and brilliant opponent. I look forward to working with him for many years to come in order to make America great again.”