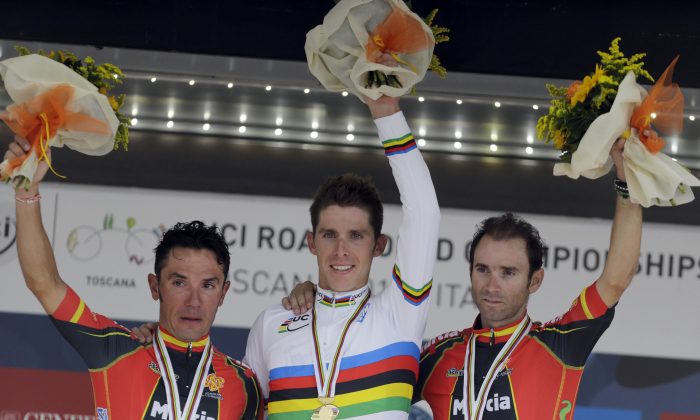 Gold medal's winner Alberto Rui Costa is flanked by silver medalist Joaquin Rodriguez and bronze medalist Alejandro Valverde Belmonte, of Spain, during the podium ceremony for the Men's Elite road race event, at the UCI Road Cycling World Championships, in Florence, Italy, Sunday, Sept. 29, 2013. Costa can manage a smile but Rodriguez is still crying over the deep disappointment of knowing he had the win and lost it through a small error. (AP Photo/Luca Bruno)
Cycling

Tears of Sorrow, Tears of Joy at the UCI Men’s World Road Championship

Spain’s Joachim Rodriguez had attacked several times in the final five kilometers of the 272-kilometer course; his legs had to be tired. With two kilometers to go, Rodriguez, called “Purito,” was eleven seconds ahead of three chasing riders.

The chasers included Italy’s Vincenzo Nibali, eager to win the World Championship on his home roads, and Spain’s Alejandro Valverde, the strongest sprinter in the bunch.

Rui Costa, who had been resting at the back of this group, made a sudden sharp attack with just over a kilometer to go. Valverde, chose to mark Nibali instead of Costa; no one took the 26-year-old Portuguese rider seriously.

Costa however had strategically saved his legs through the final kilometers; he had the speed to catch Rodriguez about 750 meters from the finish. The pair actually sat up and talked for a few seconds, possibly saying that one of them would win if they didn’t play a lot of games in the remaining distance; why not just ride up to the finish and sprint?

In any case, that is what they did; instead of squandering their lead playing cat-and-mouse, watching each other and waiting for an advantage, the pair pedaled up to the 150-meter mark and took off.

Costa went first, but Rodriguez stayed right with him. Fifty meters out, Purito pulled level with his rival and just they crossed the white line in the road, Purito thrust his bike forward, breaking the plane first.

It was the wrong line.

The actual finish line was a few feet further ahead. For some reason there was a welter of white lies crossing the road around the finish line, some solid, some dashed, and one with a black line adjacent. This last was the actual finish line, and Rui Costa crossed it first. Rodriguez, once he thrust his bike across the first line, stopped pedaling and in the next fraction of a second, Costa’s front wheel crossed the real finish line first.

For Rui Costa, this was undoubtedly the greatest day of his cycling career. A week from his 27th birthday, Costa had not made a big name for himself. He had won the Tour de Suisse twice in a row, and took two stages in the 2013 Tour de France, but still was not considered to be one of the elite riders in the sport.

Now, as he competes wearing the rainbow-striped jersey of the world champion, everyone will take him seriously; now beating Rui Costa will be a way for other up-and-coming riders to make their names.

Standing on the podium before the medal ceremony, the Portuguese rider realized what he had done, and he could not stop himself from crying. After six years as a professional rider, tens of thousands of miles of racing and many more training, after sacrificing family and friends and fun to achieve success in the sport of cycling, he was now to be crowned the best in the world.

Next to him stood Joaquim Rodriguez. At 34, Purito’s career is both reaching a peak, and fading away. He has long been known as an explosive climber, unequalled on the very steepest pitches, but only in the past couple years had he decided to become a general Classification rider, seeking to win races, not just stages.

Rodriguez wanted to win a few Grand Tours before retiring. He has come close, finishing third in his home Tour, the Vuelta a España and in the Tour de France, and second in the Giro d’Italia. He has also won the UCI points competition twice.

Purito also very much wanted to win the Worlds. He attacked repeatedly in the closing kilometers, determined to drop the best riders in the world—determined to take the win for himself.

When a younger, fresher rider did catch him, Purito played it smart. Even though he is not a sprinter, he knew he had only one chance, which would be to sprint against his younger opponent. If the pair sparred and feinted through the final several hundred meters, they would likely get caught by Valverde and Nibali.

Purito gambled everything on that final sprint, and unbelievably, the diminutive Spaniard found something left in his legs after seven hours to catch, and then pass his opponent.

A few feet too early.

Rui Costa was composed during the actual medal ceremony. The cathartic release of all the tension of a seven-hour race was passed, and the Portuguese rider was ready to enjoy his victory.

Joaquim Rodriguez was still wiping tears away as the national anthems played. He knew he had worked hard, rode smart, and used his resources perfectly to win the race. He knew he might never have as good a chance again to win cycling’s highest award. And he knew he had lost it all through a simple error.

Human emotion, dram … what the old “Wide World of Sports” preamble called “The thrill of victory, the agony of defeat”— this is what makes sports meaningful. It is not just one person being in front of another; it is the emotion aroused in the struggle to be first, to be best, to strive and to succeed or to fail.

Rui Costa knew he had succeeded, succeeded to the ultimate degree. He was The Winner, the World Champion, the best.

Joaquim Rodriguez knew that he had beaten the winner, the best the world champion and then through a simple silly error had lost it all.

A silver medal is no consolation when you have thrown away a certain gold.