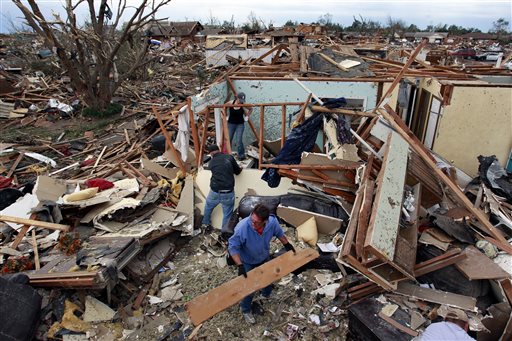 Jimmy Hodges helps Chad Heltcel and his wife Cassidi salvage the wreckage of Chad Heltcel's family home, which was destroyed Monday when a tornado moved through Moore, Okla., Tuesday, May 21, 2013. The huge tornado roared through the Oklahoma City suburb, flattening entire neighborhoods and destroying an elementary school with a direct blow as children and teachers huddled against winds. The search for survivors is almost complete, according to the city's fire chief. (AP Photo/Brennan Linsley)
Special

The search for survivors and bodies in Moore, Oklahoma, where a powerful twister ripped through on May 20, is almost over.

Moore’s Fire Chief Gary Bird said that he’s “98 percent sure” there are no more survivors or bodies to recover under the rubble in Moore, a community of 56,000 people.

Earlier in the day, Bird said the search would be thorough.

“We will go through every piece of damaged property three times by the time we are done searching,” he said, adding that he hoped to be done by the time night falls. Heavy rain throughout the day has hampered search efforts.

Every damaged home has been searched at least once, Bird said. The three searches of each location is just to be sure. No additional survivors or bodies have been found since Monday night, Bird said.

Search teams and residents, along with some journalists, will be the only people allowed in the area through the next week or two, according to authorities.

The state medical examiner has confirmed 24 deaths, down from a count of 51 last night, and most of the people who were reported missing (48) have been located.

The National Weather Service said the tornado was an EF5 twister, the most powerful type, with winds of at least 200 mph.

The agency upgraded the tornado from an EF4 on the enhanced Fujita scale to an EF5 based on what a damage-assessment team saw on the ground, spokeswoman Keli Pirtle said Tuesday.

“We’ve seen numerous structures that are wiped clean to the foundation,” said Smith.

Search and cleanup teams will be in 24/7 mode for the near future, said Cleveland County commissioner Derr Stacey. The county has opened up a place to take livestock at the local fairgrounds.

“We’re going to be in this until the very end,” he said. “This is our county and we will heal together.”

About 500 people are coming from nearby states, mostly from Texas and Lousiana, to help with the clean up, and will start work tomorrow after being briefed after arrival today.