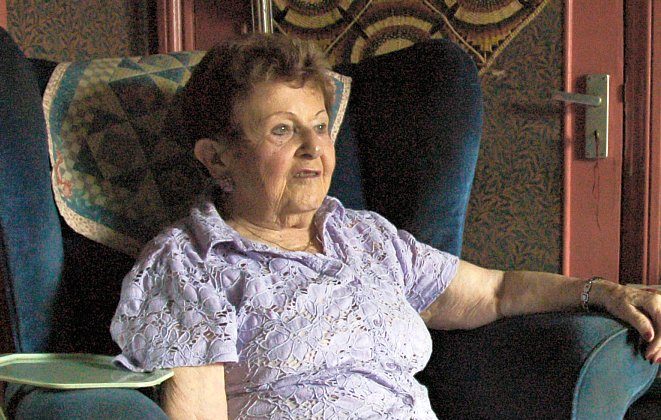 Margot Barnard sits in her home in Hampstead Heath, London. The German Jew has made a decades-long effort to openly discuss the Holocaust with students at hundreds of schools throughout Germany and England. (Tara MacIsaac/The Epoch Times)
Europe

Teaching the Enemy: A Jewish Woman’s Efforts to Educate in Postwar Germany

LONDON—Margot Barnard was a pioneer of Holocaust education. As early as the 1950s, the German Jew began openly discussing the Holocaust with Germans. The spirited 92-year-old has talked to students at hundreds of schools throughout Germany and England over the decades.

Her tiny stature and south-German sense of humor puts students at ease, explained Barnard. Pale light illuminated the petite figure as she sat in her Hampstead Heath home on a rainy August afternoon.

She has subdued hostile skinhead teenagers in German schools with her smile and kind manner, yet resistance from some of the Jewish community has been more difficult to dispel.

Some Jews view her education campaign as fraternizing with the enemy. Her brother, Walter, once asked whether her forgiveness would extend to her parents’ murderers.

“There are many holocausts,” said Barnard. “We have to stop it somewhere; we have to try at least.”

She moved to Palestine in 1936, three years after Adolf Hitler gained power. Her parents wanted to join her, but they could not get visas.

She later joined the British forces and married a British soldier, Ted Barnard. As they sailed from Egypt to England, Barnard heard the announcement: “The war in Europe is over.”

Barnard celebrated with the other passengers, but she wondered what news would come of her parents. When she left her mother to go to Palestine, her mother implored, “Please, don’t go, I’ll never see you again!” Barnard knew that her parents had been taken to a concentration camp.
When Barnard arrived in England in 1945, she was met with hostility and ignorance.

London was alive with celebration. At a street party, people danced to “Knees up Mother Brown,” but Barnard remained aloof. Her husband explained her reserve: “Unfortunately, we only heard today that [her parents] were killed.”

Barnard recalled her brother-in-law’s response: “That’s only propaganda, that didn’t happen.” Bernard thought everyone knew what the Nazis did to the Jews, but she found that most Londoners were completely unaware.

Her in-laws and others were hostile toward her. She was a German—the enemy—and she was also a Jew, a Palestinian, and an all-around foreigner.

When her husband was to be stationed in Germany in 1956, she returned with him to her homeland. She was, however, a foreigner even there. Being Jewish and now a British citizen—part of the occupying power—she felt unwelcome.

Many Germans continued to support Nazism, while others denied the genocide. What was the most difficult for Barnard, however, was the feeling that life simply continued on as usual. She remembered watching a woman eat cake outside a Hanover café as though millions of Jews had not been led to gas chambers. Barnard’s grief burst to the surface.

Barnard decided to speak at a German school for the first time in 1987. The students were happy to talk about the Holocaust openly, as many of them were unable to do so at home. They felt guilt and shame; they knew some people hated Germans for the Holocaust.

At some schools, she was warned about skinhead teenagers. She remembered how a group of 15-year-olds at a school in Beuel stood in a menacing manner as she entered the class. As Barnard spoke, they decided to take their seats. By the end of class, they even participated congenially in the discussion.

Barnard did not discuss the war much with her own children, however. Her eldest son, David, once confessed that he thought she did not talk about it because her parents had done something wrong. He could not understand why they would have been killed.

As the years passed, she was able to discuss the Holocaust more openly with her family, yet her brother, who had moved to Canada, avoided the topic when they reunited after the war.

For Barnard, it is important to discuss not only the war, but also the roots of anti-Semitism. She finds that teachers are often ignorant of those roots, and they are thus unable to educate their students.

One teacher in Barnard’s native city of Bonn once told her, “You are our teacher.”

A testament to Barnard’s educational influence is the recent renaming of Bonn’s Realschule Medinghoven (secondary school) to Margot Barnard Realschule.