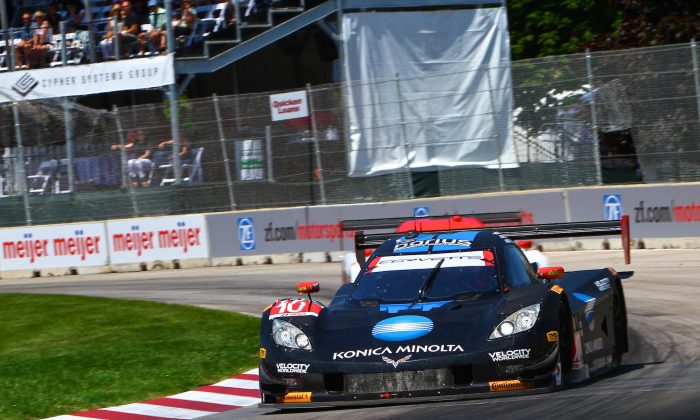 After finishing second three times in four races, at the Chevrolet SportsCar Challenge Ricky and Jordan Taylor, finally got the win they had been seeking—and with the win moved into the lead of the Tudor United SportsCar Championship.

The Taylors, who race for their father and occasional co-driver Wayne Taylor, are teamed up for their first season in 2014. Both have raced and won in other cars and in other classes, but this year are racing as a family for the first time. That first victory had proved elusive, though the car and drivers were certainly quick enough. Finally at Detroit the pair broke through—though it took some fairly physical driving both the take and hold the lead.

“This one was Corvette conquering.” Ricky Taylor told Fox Sports 1 after the race. “Jordan starting fifth and getting into the lead, that was the move of the race, and then our guys kept us up front, right in GM and Chevy’s back yard.”

The Chevrolet SportsCar Challenge, run on the 13-turn, 2.35-mile Detroit-Belle Isle street course, was another split-field race: only the Prototype and the GT Daytona classes would participate, keeping the field at a manageable 30 entries.

Jordan Taylor, the younger of the brothers by a year, qualified the #10 Konica WTR Dallara-Corvette fifth but didn’t stay fifth very long—by lap two of the 100-minute race he had advanced to third behind series leader Christian Fittipaldi in the #5 Action Express Coyote-Corvette and pole-sitter Michael Valiante in the #90 Spirit of Daytona Racing Coyote-Corvette.

Taylor passed Fittipaldi on lap 11, and on lap 17 took advantage of lapped traffic to squeeze inside Valiante. Taylor muscled his way past the #90 SDR car, stripping off one of its dive planes in the process, but race officials saw no foul, so the #10 had the lead.

After 32 minutes of racing Henry Cisneros in the #30 Momo NGT Porsche spun and hit the tire wall, doing enough damage to necessitate a full-course caution.

Almost the entire prototype field headed for the pits to swap drivers and service their cars. Jordan handed off to older brother Ricky (24,) who led the field back to green for the lap 27 restart. Ricky had only led for a lap when Damian Faulkner in the #81 Tully’s Coffee Porsche GT America tried to get around a corner three-wide and ended up stuffed in the tire barrier. His Porsche leaked fluids all over the track forcing an eight-lap stoppage.

There were only 27 minutes left in the race when the green flag waved again on lap 38, and Ricky Taylor wasted no time in leaving the next five cars to battle among themselves, opening a four-second gap in two laps.

Joao Barbosa, who had taken over the #5 AXR Coyote-Corvette from Christian Fittipaldi, had no intention of finishing second. He reeled in the older Taylor brother by a few tenths per lap until by lap 53, with just under six minutes left to race, Barbosa was right on Taylor’s wing.

On the next lap the AXR driver made a strong move entering Turn One; Taylor gave no ground, running Barbosa almost into the wall and forcing him to lift.

Barbosa worked his way back up to Taylor, and on lap 56 tried again when the WTR pilot slid a little exiting Turn 11. Taylor kept control and kept the lead; with less than a minute left on the clock, Barbosa knew he had very few chances left, and he was in no mood to be balked.

The wily Barbosa feinted to the outside approaching Turn Three; when Taylor bit the bait and moved high, Barbosa ducked underneath and got next to the #10 WTR car. Again, Taylor would not give way, so Barbosa ran wide on the exit, bumping Taylor into the wall, and squirted past into the lead with only ten turns left in the race.

Fate was not on the aside Joao Barbosa. Though Taylor’s #10 WTR Dallara-Corvette hit the wall, it was undamaged. Barbosa’s AXR Coyote-Corvette suffered a left rear puncture in the impact with the Taylor car. The tire disintegrated, tearing the AXR car’s bodywork to shreds and flinging scraps of tire and carbon fiber all over the track.

While Barbosa fishtailed and eventually spun to a stop backwards near the wall, Taylor got back on the gas and pushed on for the finish line, crossing it just two-tenths of a second ahead of Richard Westbrook who had replaced Michael Valiante in the #90 SDR Coyote Corvette.

Barbosa never crossed the line; he and Fittipaldi were credited with sixth, the last car on the lead lap.

“Those last couple laps were pretty hairy,” Taylor told Fox. “I was pushing my hardest and Barbosa was really fast—a couple more laps and he would have been by.

“I thought we were done after he put us into the wall. I was waiting was waiting for me to have puncture because I hit the wall. The I saw his [Barbosa’s] tire going down on the back straight and all I could think of was ‘Rich [Westbrook] is behind me and he’s got a nicer car than I do right now;’ his Corvette was a little fresher— corners which aren’t overtaking places.

“I can’t be happier for all the guys and Jordan just did so great.”I even had to defend in the last two corners, which aren’t overtaking spots.”

The back of the Prototype filed and the front of the GT Daytona grid take the green flag. (Halston Pitman/MotorSportsMedia)

Fate smiled twice on the Taylor family at Detroit. Not only did the car survive two collisions and cross the line first, both its championship rivals failed to finish.

Barbosa and Fittipaldi in the #5 AXR Coyote-Corvette, which came in leading in points with 127, earned only 25 points for sixth place.

The second-placed car in the standings, the Telcel-Ganassi Riley-Ford of Scott Pruett and Memo Rojas, broke down in the first ten minutes of the race. The team tried to repair the car and send it back out, but it was too slow and had to be retired, completing only twelve laps.

This double failure coupled with a 35 point-win vaulted the Taylors from third to first in the drivers championship, albeit by a slim seven-point margin, 159 to 152. Wayne Taylor Racing won the Rolex Sports Car Series title in 2013, but not with both sons driving. A repeat in the new Tudor United SportsCar Series a full family effort would be one of those achievements one remembered for a lifetime.

The Taylors will get a chance to advance towards that dream on Sunday, June 29th, at the Sahlen’s Six Hours of the Glen, a classic North American endurance race at the historic 3.4–mile Watkins Glen racetrack in upstate New York. This race will feature the full Tudor line-up: all four classes, Prototype, Prototype Challenge, GT Le Mans, and GT Daytona will all participate in this six-hour endurance test.